The 223cm French phenomenon from the club Metropolitans 92 blocked shots at the rim and on the perimeter, got rebounds, ran the floor, set screens, scored on a nifty spin move, showed off his ability to dribble, dived for a loose ball and even played point guard on one possession.

Oh, and all that was in the first two minutes.

Talk about setting the tone. The 200 scouts and NBA executives who came to see a show didn’t have to pay for their tickets on Wednesday (AEDT), but if they had, they wouldn’t have been short-changed at any price. Wembanyama showed off all the skills that have him widely presumed to be the No.1 pick in the 2023 NBA draft. 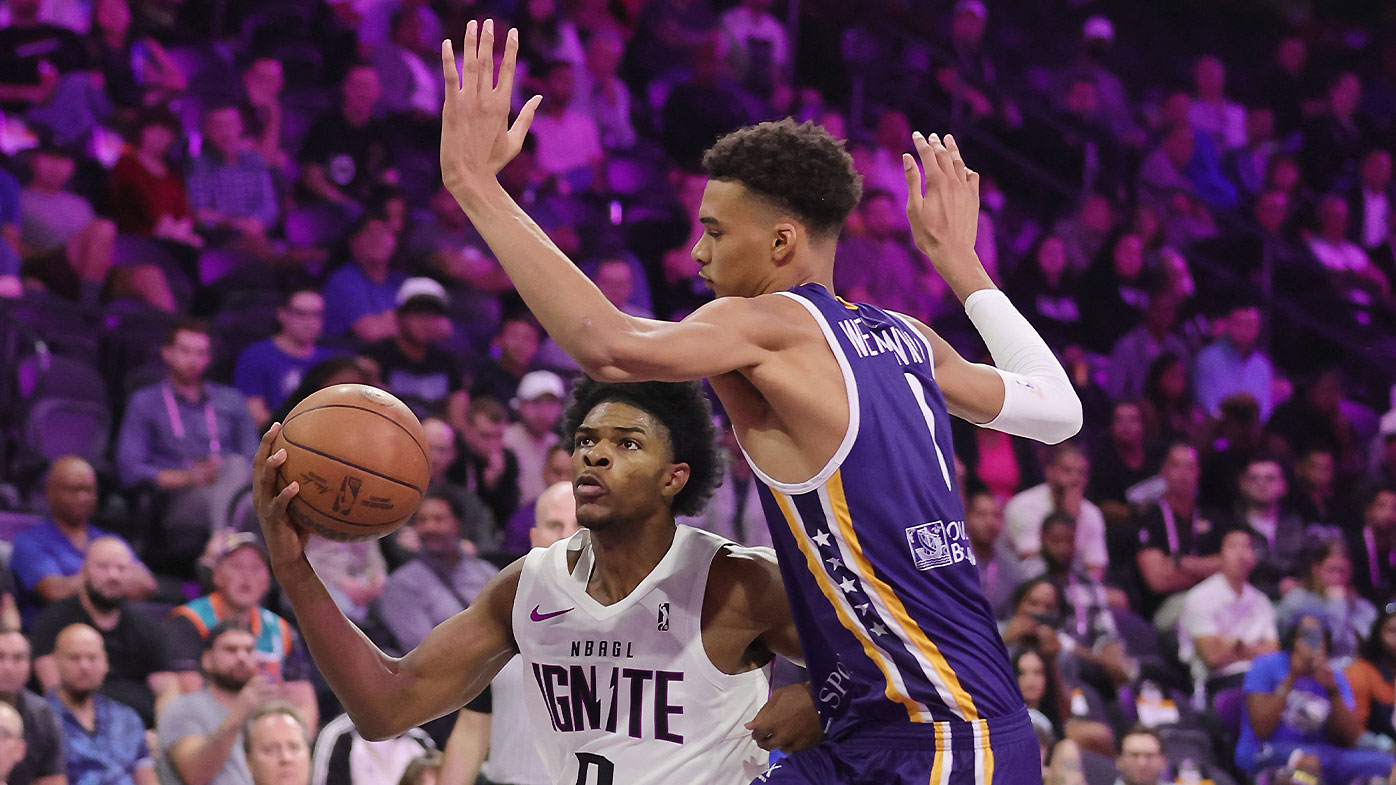 The final score, as if it mattered: G League Ignite 122, Metropolitans 115, with Scoot Henderson — the consensus No.2 pick, as of now anyway — finishing with 28 points and nine assists for the Ignite.

The teams will play again on Friday AEDT; after that, the next time Wembanyama plays a game of any significance on US soil will likely be at NBA Summer League next July. 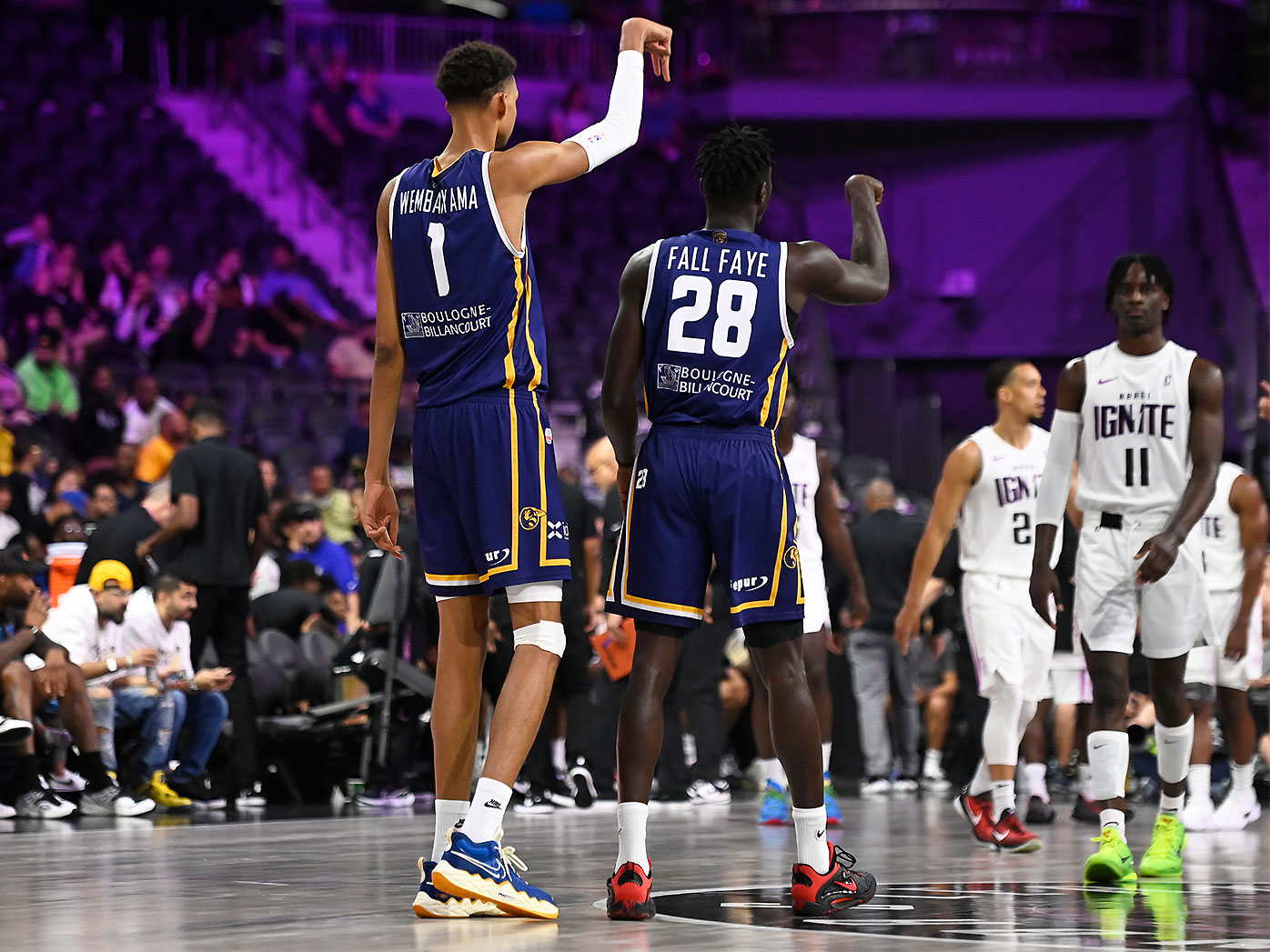 Much of the Wembanyama repertoire was on full display, and it was as good as advertised.

He made three-pointers. Step-back jumpers. Did what seemed to be mildly reminiscent of the Michael Jordan shrug from the 1992 NBA Finals after one of those shots fell.

He played through what appeared to be a bit of a twisted ankle, making a fadeaway three while doing so. He even argued foul calls like a seasoned NBA veteran and may have had a legitimate case on a couple of occasions.

Even the stuff that didn’t show up next to Wembanyama’s name in the box score was eye-popping at times. Case in point: a play midway through the second quarter when he set a pick near midcourt, rolled, caught a pass a couple inches inside the three-point line, took one dribble and went airborne — because by then, he was already in the middle of the lane.

He tried to elevate over multiple Ignite players, took a shot, got fouled, shrugged off the contact and dunked the rebound.

It didn’t count, but still had some sitting court-side reacting in disbelief.

There are always shows in Vegas, but Cirque du Soleil wasn’t the French brand capturing the basketball world’s attention.

Chris Paul, Devin Booker and Trevor Ariza, in town with the Phoenix Suns to play the Los Angeles Lakers, showed up to watch with seats near the Metropolitans bench. DeMarcus Cousins grabbed a seat near the Ignite bench. 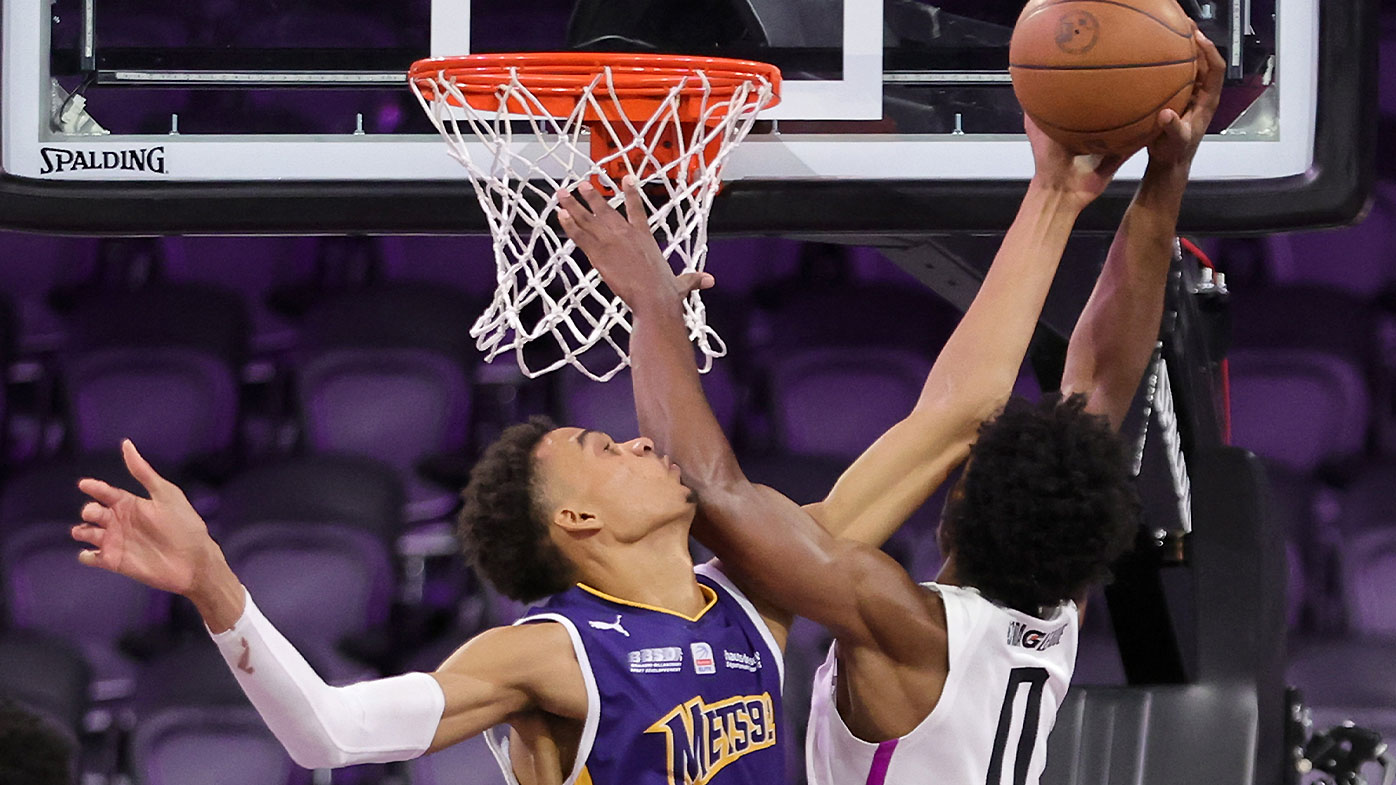 Chelsea Gray and A’ja Wilson of the WNBA champion Las Vegas Aces — coming off a FIBA World Cup gold medal won a few days ago as well — watched from one of the baselines. The WNBA trophy even made an appearance.

“Everyone’s going to be watching him,” said Metropolitans 92 guard Tremont Waters, who has played for three NBA clubs.

And this wasn’t just The Victor Show, either. Henderson — another super-talented 18-year-old — believes he should be the No.1 pick and had more than his share of moments. He got around Wembanyama’s incredible 243cm wingspan a couple of times for layups, got him in the air to set up assists to Ignite teammates a couple more times, made a step-back three over him as well.

He also tried what would have been a dunk with 3:31 left. Wembanyama swatted it away with ease. Henderson also tried a three with 1:31 left; Wembanyama sent that into the seats.

But Henderson — who was 11-for-21 from the field, three of those 10 misses being blocks by Wembanyama — more than lived up to his end of the bargain in this made-for-TV showdown.

“This game meant a lot to Scoot,” said Ignite forward Shareef O’Neal, the son of Hall of Famer Shaquille O’Neal. “That’s my No.1 pick.”

Said Henderson: “I feel like I impacted the game.”

Henderson showed some fire. He gave the Metropolitans’ bench a long look when time was called in the second quarter and the Ignite were starting to build their lead. Wembanyama had a little edge to him as well; he made a three-pointer from near the Ignite bench early in the second half, then turned and gave those seated there a look, then converted a four-point play on his next possession.

Nicolas Batum, who played for Collet at the Tokyo Olympics in the summer of 2021 and the 2019 Basketball World Cup in China, tweeted this during the second half: “One thing for sure is that the first 2 picks are LOCKED for the next NBA draft.”

Much can change between now and June. But Batum’s prediction seems pretty safe.

A Victor vs Scoot show was what the NBA wanted. It delivered.