Racing authorities in Europe have handed ﻿Belgian jockey Christophe Soumillon a two-month ban for elbowing a rival jockey off of his horse mid race.

During a race at Saint-Cloud racecourse in France, Soumillon was riding the Francis Graffard-trained Syros while Irish jockey Rossa Ryan was riding Captain Wierzaba.

As both riders approached the back straight﻿, Ryan looked to move inside as Soumillon responded aggressively and used his arm to shove Ryan away.

In scary scenes that could have had serious implications for Ryan, the Irishman﻿ lost his balance and fell to the ground in mid-air as Soumillon continued on before stewards intervened and disqualified him in the aftermath of the race.

Thankfully, Ryan escaped unscathed and didn’t seem to hold any ill will towards the Belgian after the race.

“I just got a bump and lost my balance. It’s just one of those things that happens,” Ryan said. 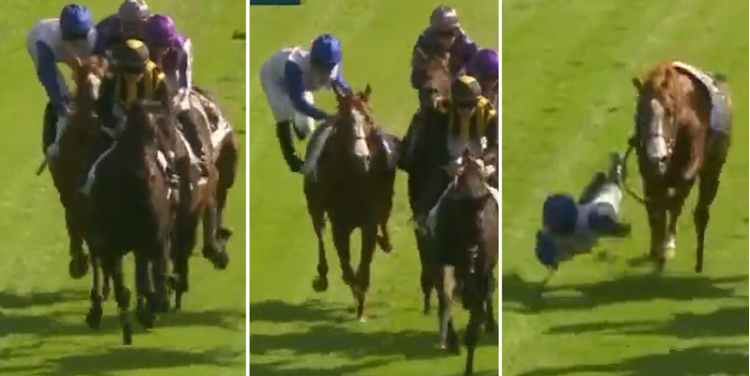 “I feel disappointed for Ralph (trainer) and his team bringing him out here, but we’ll move on.

Despite the unsavory act,﻿ Soumillon is free to race in the $AUD6.9 million Arc de Triomphe race on Sunday as his ban does not take effect until October 14.

“I put my elbow against him just to make him understand I wasn’t going to the inside,” Soumillon explained.

“Unfortunately when I asked my horse to go there and to the right I pushed him (Ryan) for a stride or two and he fell off. Straight away I knew I made a mistake.

“I’m terribly sad with what happened as I hate seeing stuff like this. When you are the one doing it you feel even more terrible.

“I just received a big suspension from France Galop stewards – I am going to be suspended for two months.

“My season is now gone. I accept the sentence for what I did, it was a terrible decision.

“I shouldn’t have done that and I didn’t do it on purpose to make him fall off the horse.

“I probably did it with a bit of power but it was a misjudgment from my side. I feel really bad.”

‘I don’t see myself there’: Ricciardo spills F1 truth