‘IT’S A CULT’: Whoopi Unveils ‘Little Amal,’ A Terrifying 15-Foot Puppet That She Calls A ‘Powerful Symbol Of Human Rights’ Whoopi Goldberg heralded a giant puppet named “Little Amal” for being “a powerful symbol of human rights” on Thursday’s edition of ABC’s “The View.”

On the View, Whoopi introduces Little Amal, a terrifying 12-foot puppet that she calls a “powerful symbol of human rights,” while an audience of fully-masked Libs applaud

“You’re about to meet an international phenomenon who has traveled across 12 countries with an urgent message from every child fleeing war, violence and oppression: “Don’t forget about us,” Goldberg said as a 15-foot puppet walked across the set. “Her journey has led her here today. So, please welcome a powerful symbol of human rights. Her name is Little Amal.”

Little Amal, whose name means hope in Arabic, is on a worldwide pilgrimage to raise awareness about the plight of unaccompanied refugee minors, explained Amir Nizir Zuabi, who designed of the puppet in 2021.

“We started the journey on the Syrian, Turkish border… then we crossed Turkey, Greece, Italy, Belgium, France, Germany and the UK. After we finished the first journey and with the awful war happening in Ukraine, we also took her to meet refugee children in Lviv and Ukraine.”

A co-host of The View kissed the puppet’s hand and gleamed, ” She’s beautiful.”

As the co-hosts of the View championed the “powerful symbol of human rights,” every member of the audience and crew is seen wearing a mask.

Only Zuabi, Goldberg and the other co-hosts are unmasked. The corporate press is also fawning over Little Amal.

Little Amal is “searching for her mother, who went off to find food and never returned,” The Guardian reports. “She is the central, and only, character in a spectacularly ambitious theatre project.”

Little Amal’s worldwide tour, “The Walk will face down international Covid restrictions in a visionary act of solidarity with the plight of refugees, defiance of the borders that put their lives in danger, and belief in the humanity of ordinary people faced with a global humanitarian crisis,” the publication notes. 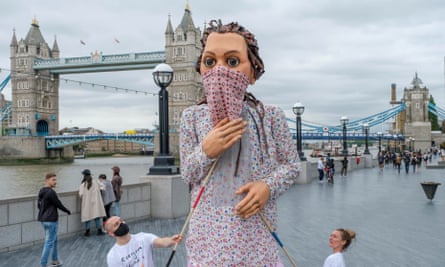 Refugees “come with knowledge. They come with experience. They’re some of the most resilient people on planet Earth. And we wanted to celebrate their huge potential…to create something that was beautiful and joyous and connects communities together,” Zuabi told CNN’s Christiane Amanpour.

Since arriving in New York on September 14, Amal has promoted mass migration by walking through Grand Central Station, Times Square and crossing the Brooklyn Bridge.

At St. Patrick’s Cathedral, the giant puppet greeted migrants and refugees who’d only recently arrived in the city.

“We’ve been to all five boroughs. In the seventeen days that we’re here, we’ve done 55 events. They are all free. Walking with Little Amal is showing solidarity to immigrants, refugees and asylum seekers everywhere, not only Syrian,” Zuabi told The View. “She is Syrian but she tells the story of all children that are like her. Come join us on our walks.

“Our last chance to say goodbye will be Sunday in Anne’s Warehouse in Brooklyn Bridge Park.”

The post ‘IT’S A CULT’: Whoopi Unveils ‘Little Amal,’ A Terrifying 15-Foot Puppet That She Calls A ‘Powerful Symbol Of Human Rights’ appeared first on The Gateway Pundit.

Creepy Bill Gates Makes Ominious Prediction: ‘We’re Going To Have A Hung Election And A Civil War,’ Misinformation ‘May Bring It All To An End