This day, this match, had to come, of course, for Roger Federer, and for tennis, just as it inevitably must for every athlete in every sport.

Federer bid adieu with one last contest before he heads into retirement at age 41 after a superlative career that included 20 Grand Slam titles and a statesman’s role. He wrapped up his days as a professional player with a loss in doubles alongside his longtime rival Rafael Nadal for Team Europe in the Laver Cup against Frances Tiafoe and Jack Sock of Team World. 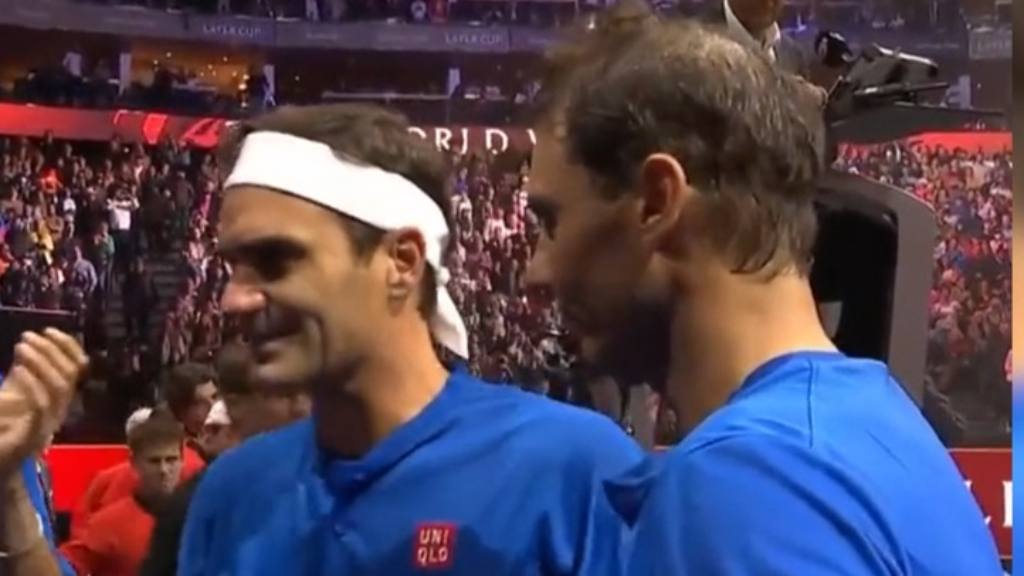 The truth is that the victors, the statistics and the score (OK, for the record it was 4-6, 7-6 (2), 11-9) did not matter, and were all so entirely beside the point. The occasion was, after all, about the farewell itself. Or, better, the farewells, plural: Federer’s to tennis, to the fans, to his competitors and colleagues. And, naturally, each of those entities’ farewells to Federer. When the match, and with it, his time in professional tennis, ended, Federer hugged Nadal, then Tiafoe and Sock. And then Federer began crying. As cascades of clapping and yells of affection came from the stands, Federer put his hands on his hips, his chest heaving. Then he mouthed, “Thank you,” while applauding right back toward the spectators who had chanted, “Let’s go, Roger! Let’s go!” during the concluding moments of a match that lasted more than two hours and ended at about 12:30 a.m.

“We’ll get through this somehow,” a tearful Federer said.

“It’s been a wonderful day. I told the guys I’m happy, not sad.

“It feels great to be here. I enjoyed tying my shoelaces once more, every thing was the last time.

“I didn’t feel the stress so much even though I thought maybe something was going to go, like a calf, but the match was great.

“Playing with Rafa and having all the greats here, all the legends, thank you.”

The Swiss star announced last week that the three-day team event, which was founded by his management company, would be his final event before retirement, then made clear the doubles outing would be his last match. His surgically repaired right knee — the last of three operations came shortly after a loss in the Wimbledon quarterfinals in July 2021, which will go down as his final official singles match — is in no shape to allow him to continue. “For me, just personally, (it was) sad in the first moment, when I came to the conclusion it’s the best decision,” Federer said in an interview with The Associated Press this week about his emotions when realising it was time to go. “I kind of held it in at first, then fought it off. But I could feel the pain.”

A couple of hours before Friday’s match, Federer tweeted: “I’ve done this thousands of times, but this one feels different. Thank you to everybody who’s coming tonight.”

Nadal was also in tears during the emotional scenes, while Federer also broke down while embracing wife Mirka and their four children, telling them he was happy rather than sad.

He had said he wanted this to feel more like a party than a funeral, and the crowd obliged, rising for a loud and lengthy standing ovation when Federer and Nadal — each wearing a white bandanna, blue shirt and white shorts — emerged together from a tunnel leading out to the black court for the last match on Day 1 at the O2 Arena. The spectators remained on their feet for nearly 10 minutes, through the pre-match warmup, holding aloft phone cameras to capture the moment. They came ready to roar for him, some with Swiss flags, some with homemade signs, and they made themselves heard with a wall of sound when Federer delivered a forehand volley winner on the match’s second point. Similar reactions arrived merely at the chair umpire’s announcement before the third game of “Roger Federer to serve,” and again when he closed that game with a 188km/h service winner.

Doubles requires far less movement and court coverage, of course, so the stress on his knee was limited. Federer showed touches of his old flair, to be sure, and of rust, as to be expected.

As his parents and wife sat in front-row seats behind a baseline, there were a couple of early forehands that sailed several feet too long. There also was a forehand that slid right between Sock and Tiafoe and seemed too good to be true — and, it turned out, was: The ball travelled through a gap below the net tape and so the point was taken away from Federer and Nadal. 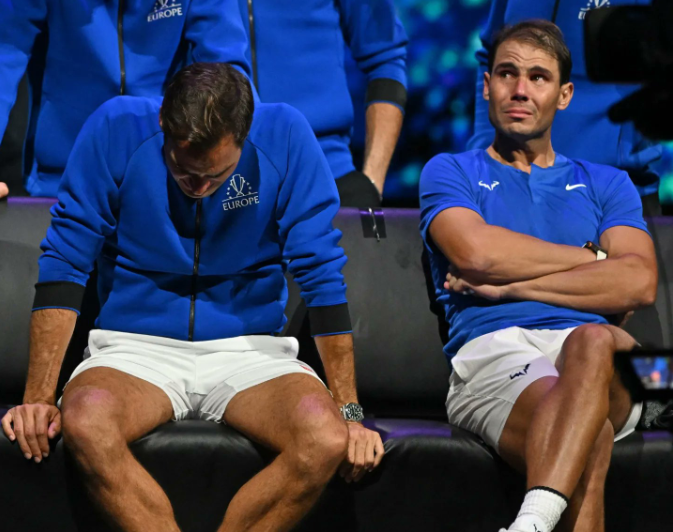 Although it amounted to, essentially, a glorified exhibition, all four doubles participants played as if they wanted to win. That was clear when Sock leaped and screamed after one particularly terrific volley or when Tiafoe sent a couple of shots right at Federer and Nadal.

But the circumstances did allow for moments of levity.

Federer and Nadal were able to laugh after a bit of confusion over which should go for a ball on a point they lost. After Nadal somehow flicked one back-to-the-net shot around the post, only for it to land barely wide, Tiafoe crossed over to extend a hand with congratulations for the effort. In the first set, the two greats of the game couldn’t quite hear each other between points, so Federer trotted from the net back to the baseline to consult with Nadal, then pointed to his ear to signal to the fans what the issue was.

Before Federer, the men’s mark for most major tennis championships was 14 by Pete Sampras. Federer blew past that, accumulating eight at Wimbledon, six at the Australian Open, five at the U.S. Open and one at the French Open, setting a new standard that Nadal, now with 22, and Novak Djokovic, with 21, equalled, then surpassed, as part of a golden era for the sport. 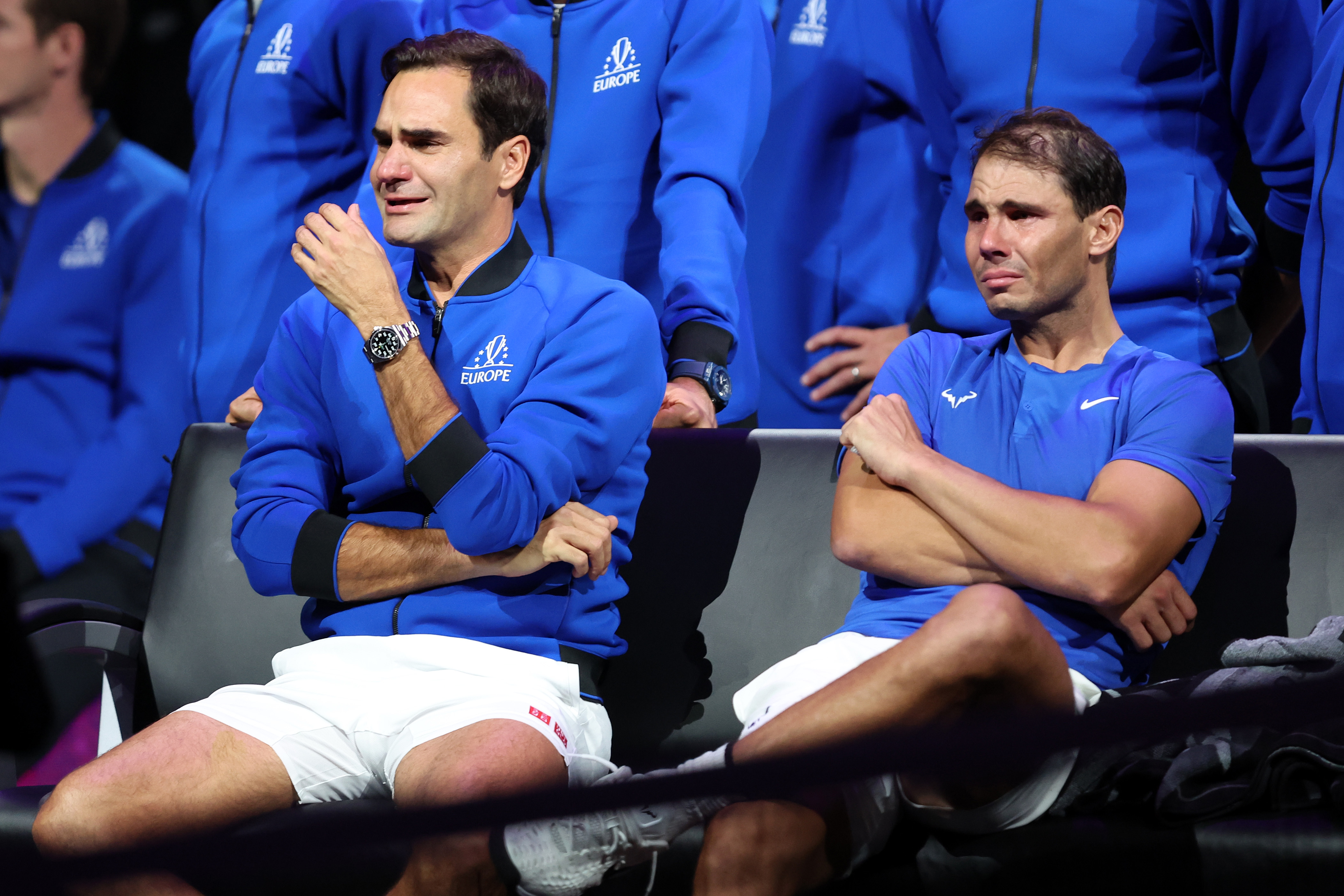 Federer’s substantial resume includes 310 weeks at No. 1 in the ATP rankings, a Davis Cup title and Olympic medals. Beyond the elegance and effectiveness while wielding a racket, his persona made Federer an ambassador for tennis, someone whose immense popularity helped attract fans.

Surely, there are those who would have found it particularly apt to see Federer finish across the net from Nadal, often an on-court nemesis but eventually an off-court friend. Maybe it could have taken place about 15 miles away at Centre Court of the All England Club, say, or in Court Philippe Chatrier at Roland Garros, or Rod Laver Arena at Melbourne Park, or even Arthur Ashe Stadium, the centerpiece of the U.S. Open, the lone Grand Slam tournament at which they never faced off, somehow.

Perhaps they could have provided everyone with one final installment of a head-to-head matchup as memorable as any in the long history of their sport — or, indeed, any other.

Roger vs. Rafa — just one name apiece required — belongs up there with McEnroe vs. Borg (as it happens, the two Laver Cup team captains, John and Bjorn), Evert vs. Navratilova, Sampras vs. Agassi, Ali vs. Frazier, Magic vs. Bird, Brady vs. Manning, and so on.

Over the years, Federer and Nadal showed off individual greatness and compelling contrasts across their 40 matches, 14 at Grand Slam tournaments, nine in major finals: righty vs. lefty, attacker vs. grinder, seeming effortlessness vs. relentless intensity. 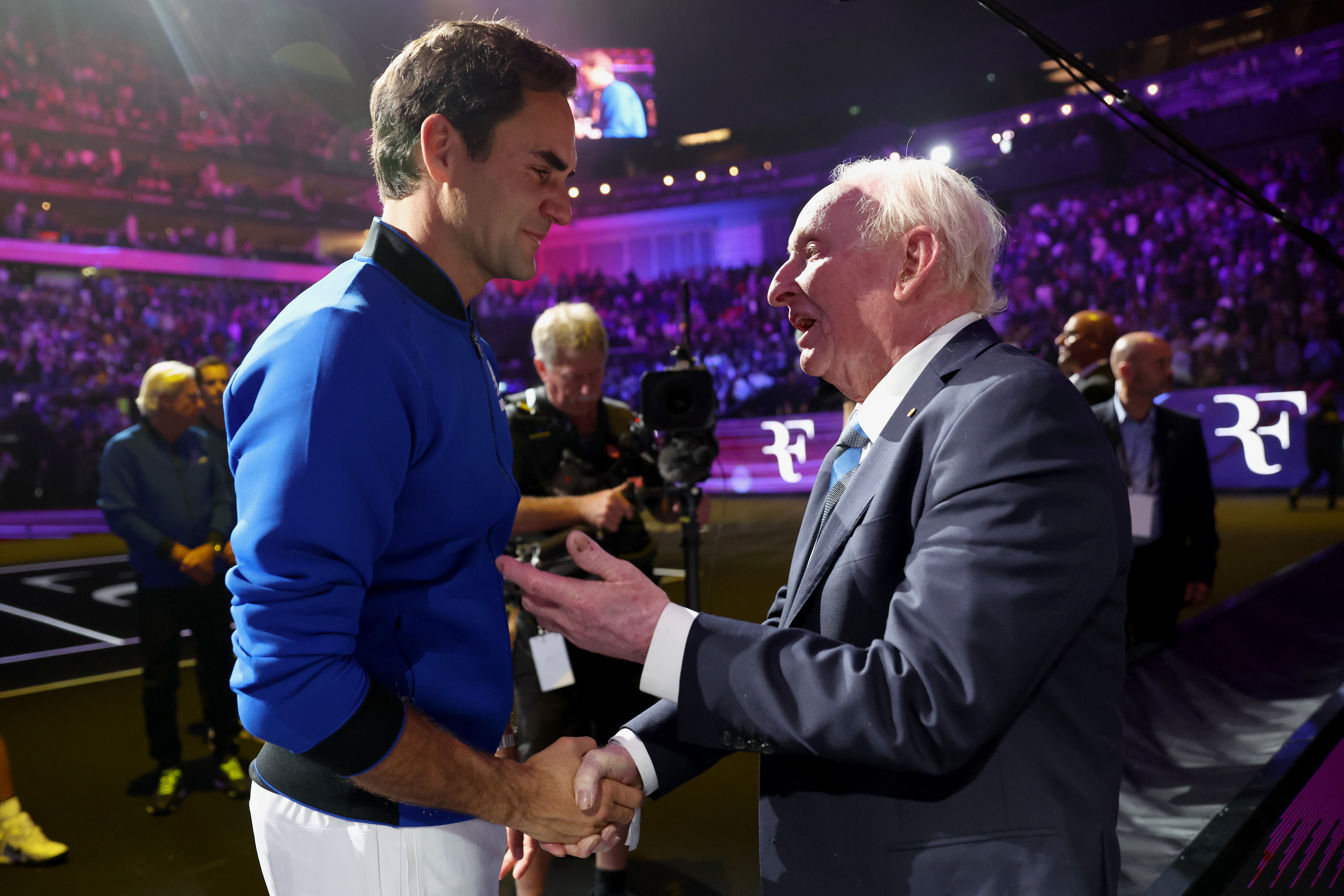 And yet, there was an unmistakable element of poetry with these two men who challenged each other and elevated each other performing as partners, slapping palms and sharing smiles.

“Two of the ‘GOATs’ playing together,” said Sock, using the popular acronym for “Greatest of All-Time.”

This goodbye follows that of Serena Williams, the owner of 23 major singles championships, at the U.S. Open three weeks ago after a third-round loss. It leaves questions about the future of a game he and she dominated, and transcended, for decades. 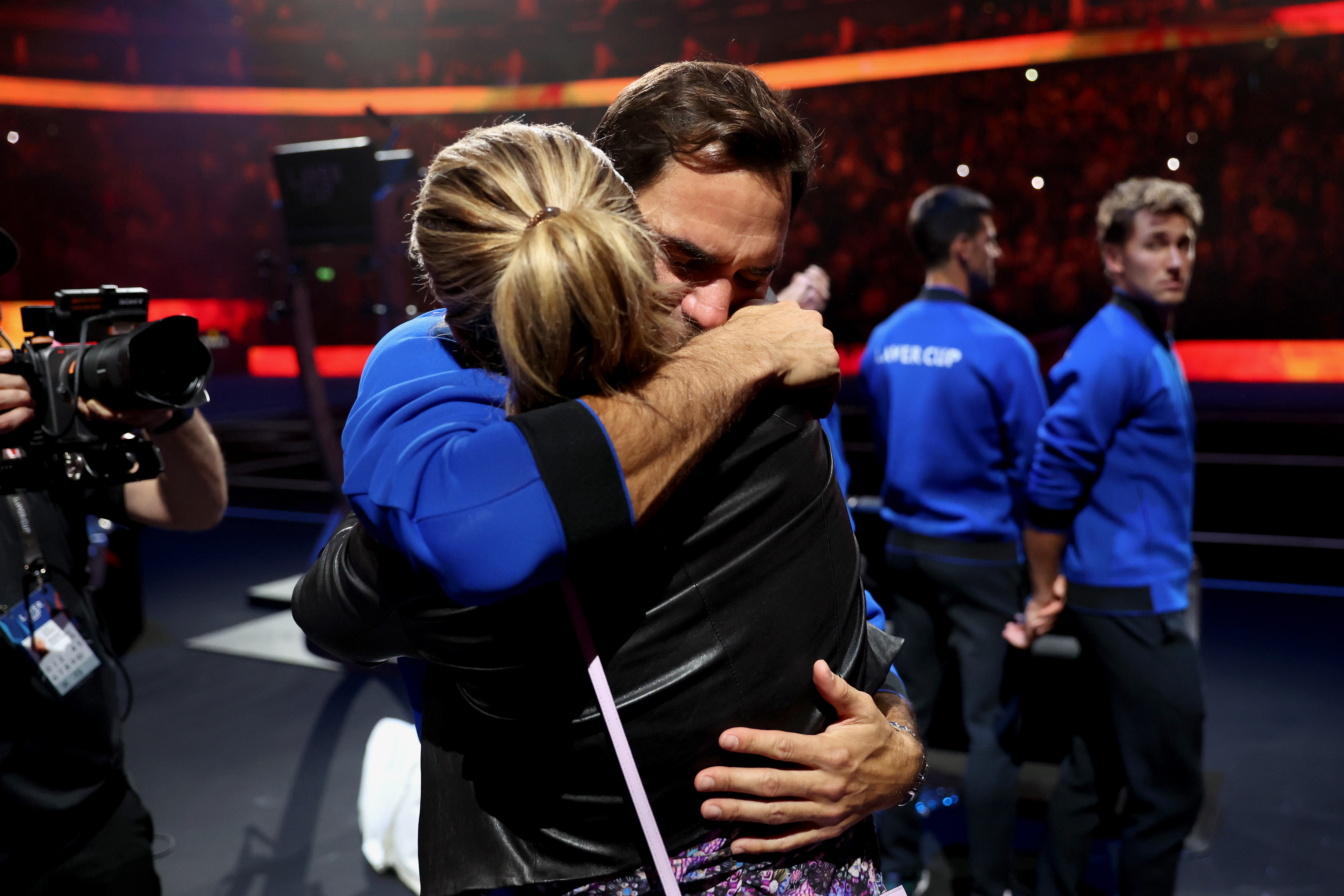 One key difference: Each time Williams took the court in New York, the looming question was how long her stay would endure — a “win or this is it” prospect. Friday WAS it for Federer, no matter the result.

The other results, which left Team Europe and Team World tied at 2-2: Stefanos Tsitsipas defeated Diego Schwartzman 6-2, 6-1 in a match interrupted briefly when an environmental protester lit a portion of the court and his own arm on fire, and Alex de Minaur got past Andy Murray 5-7, 6-3, 10-7. 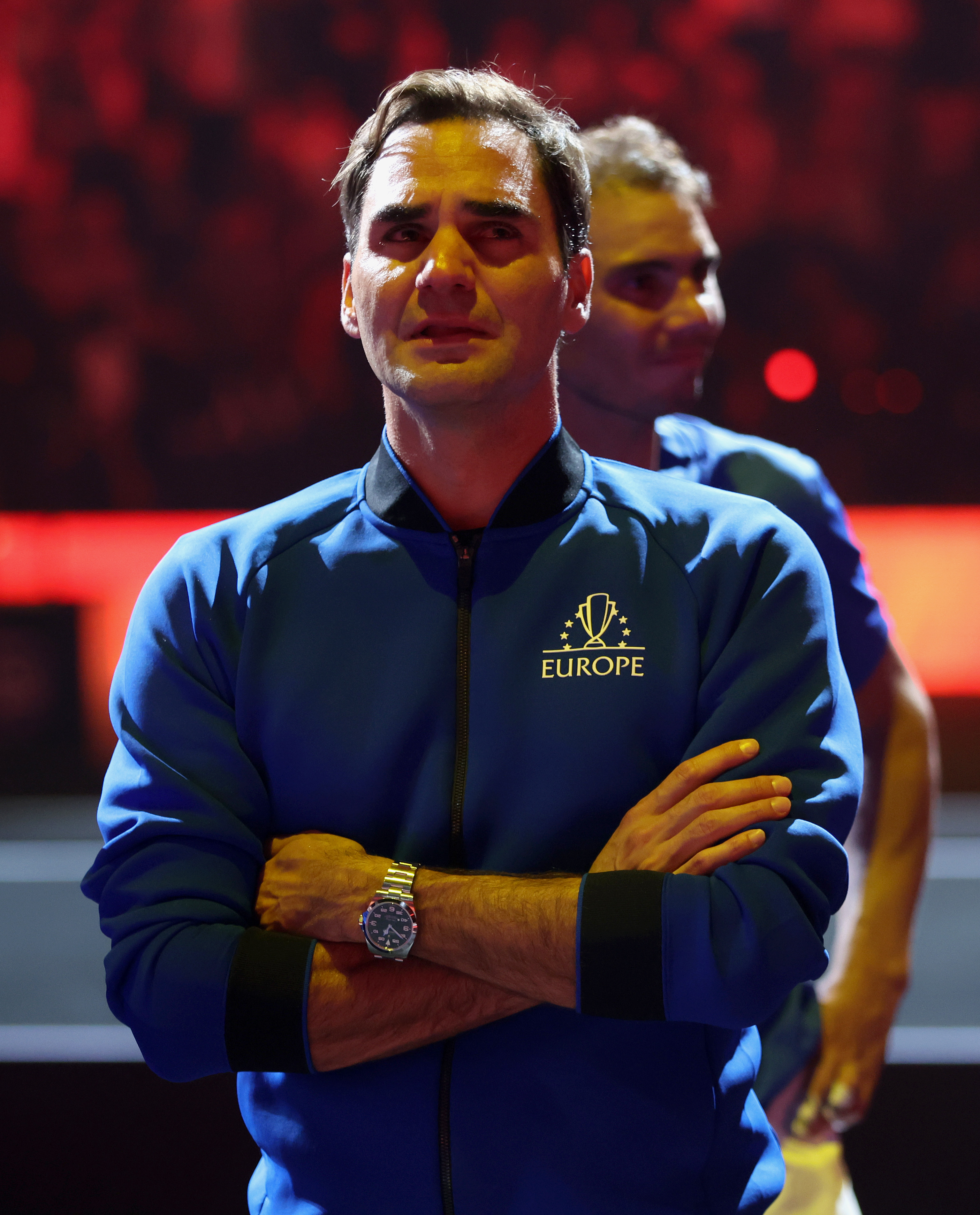 Due to begin playing shortly after the end of Murray’s loss, Federer and Nadal first provided him with some coaching tips, then watched part of that one on TV together in a room at the arena, waiting for their turn. When Federer and Nadal were in action, it was Djokovic’s turn to suggest strategic advice.

The last hurrah came after a total of 103 career singles trophies and 1,251 wins in singles matches for Federer, both second only to Jimmy Connors in the Open era, which began in 1968. 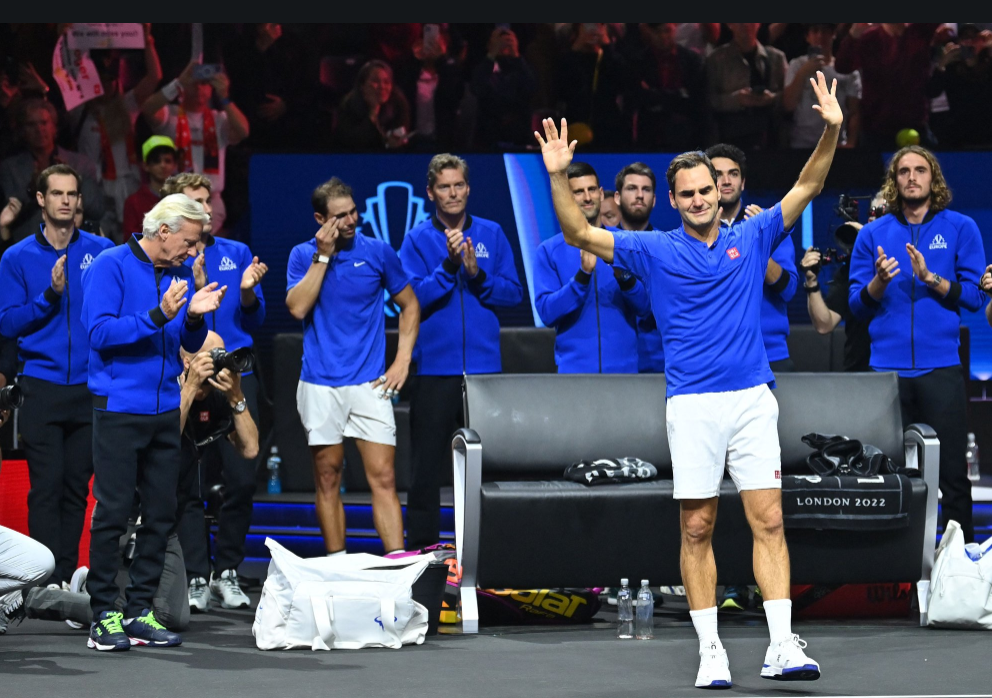 More than those numbers, folks will remember the powerful forehand, the one-handed backhand, the flawless footwork, the spectacularly effective serve and eagerness to get to the net, the willingness to reinvent aspects of his game and — the part of which he’s proudest — unusual longevity.

“I don’t think we’ll see another guy like Roger,” Tiafoe said. “The way he played, and the grace he did it with, and who he is as an individual.”