“Bill Barr is a Stone-Cold Liar! I Said this from the Beginning. There was No Report Done!” – Bannon DESTROYS Bill Barr with Author Leah Hoopes (VIDEO) 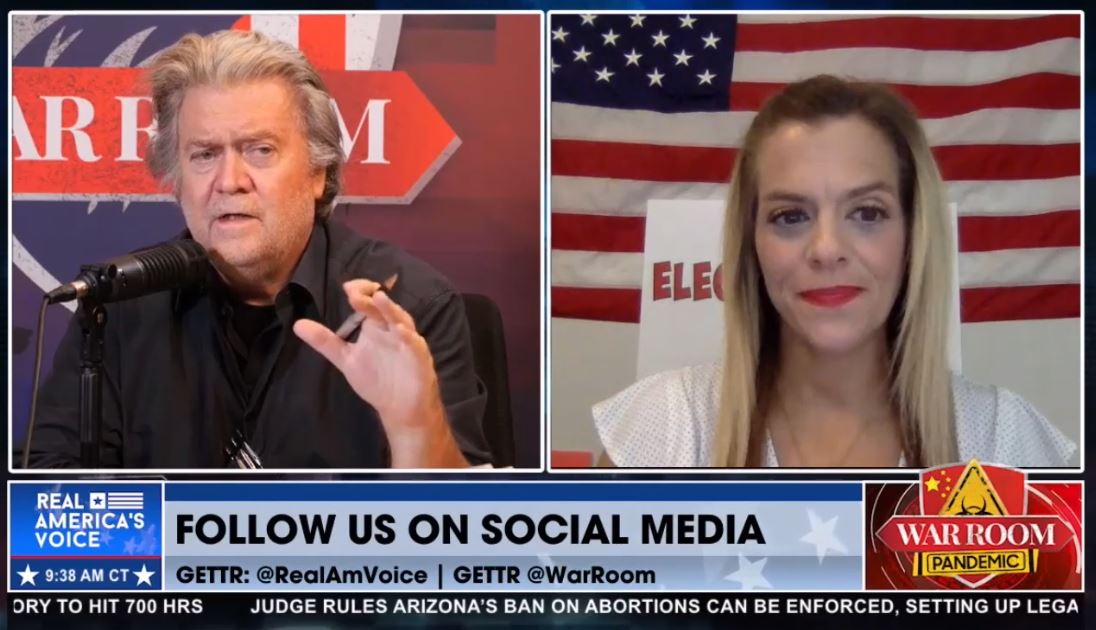 The book documents, in great detail and with irrefutable evidence, the massive election fraud that was perpetrated against the citizenry in the November 2020 United States general election, which resulted in the installation of an illegitimate government.

Leah Hoopes was a GOP poll watcher in Chester Pennsylvania during the 2020 election.

The far-left officials running the local elections forced the GOP poll watchers into a small pen where they could not witness the counting of ballots.  This was a common tactic used in swing states by far-left officials during the 2020 election.  GOP poll watchers were abused and prevented from doing their job.  Democrats approved of this practice.  They can’t win if they can’t cheat.

This resulted in a massive chain of custody issues across the US — and always hampering Republican poll watchers, never the other way around. This is one tactic Democrats used to cheat and steal the election.

The Gateway Pundit reported on Leah Hoopes back in November 2020.

After Leah Hoopes and Gregory Stenstrom testified in Gettysburg, Pennsylvania, special agents from the state Attorney General’s office showed up at their door to harass them.

Leah Hoopes said Special Agents from Attorney’s General office made a visit to her home to question her after she testified last week in Gettysburg.

On Saturday Leah Hoopes was back on The War Room promoting her book with Gregory Stenstrom.

Leah told Steve Bannon US Attorney Bill McSwain was told to stand down after the 2020 election when he was ready to initiate an investigation into the election fraud. US Attorney General Bill Barr told McSwain to stand down.

Bill Barr later testified and repeated several times that there was no voter fraud. Barr lied.

Hoopes sent a letter to McSwain demanding they investigate and Bill Barr told him to stand down.

Later the state of Pennsylvania sent in troops to harass Leah Hoopes at her home.

BARR LIED! FOIA Requests Reveal There Were No DOJ Investigations on Election Fraud After 2020 Election as Bill Barr Claims (VIDEO)

Via The War Room:

The post “Bill Barr is a Stone-Cold Liar! I Said this from the Beginning. There was No Report Done!” – Bannon DESTROYS Bill Barr with Author Leah Hoopes (VIDEO) appeared first on The Gateway Pundit.