How the Swans can snap Cats’ streak in GF

G﻿eelong is the overwhelming favourite heading into this year’s AFL grand final, having won an incredible 15 games in a row en route to the big dance.

Despite Sydney riding its own nine-game winning streak, Geelong has been the popular pick to take out this year’s premiership.

Bookmakers have the Cats as $1.47 favourites, with the Swans paying $2.62, per SportsBet.

The Swans are one of four teams to have beaten the Cats this year, having prevailed by 30 points at the SCG in round two, the night Lance Franklin breached the 1000-goal barrier. 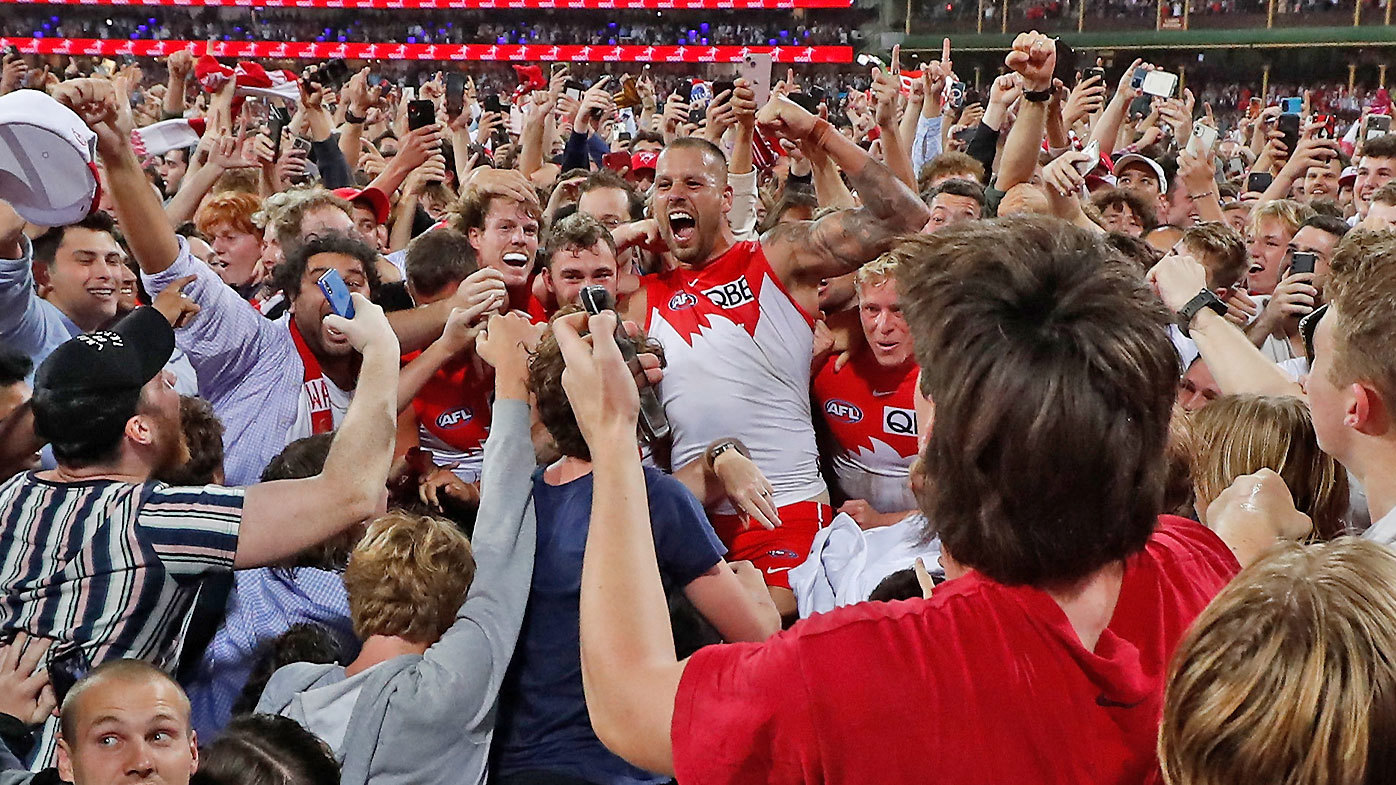 According to former AFL coach Ross Lyon, there are several boxes the Swans must tick in order to topple the Cats on the biggest stage of all.

Both teams boast elite offensive and defence profiles, with Geelong ranking second in points for and the Swans fourth.﻿ The Cats are first in points against while the Swans are fourth.

While their rankings offensively are similar, the methods are quite different, as proven by the two teams’ kick-to-handball ratios and mark-play on percentages.

The Cats average 1.3 kicks per handball, while the Swans have a two-to-one kick-to-handball ratio.

Geelong is more willing to run the ball, playing on from a mark 32 per cent of the time, while the Swans do so after just 16 per cent of their marks. 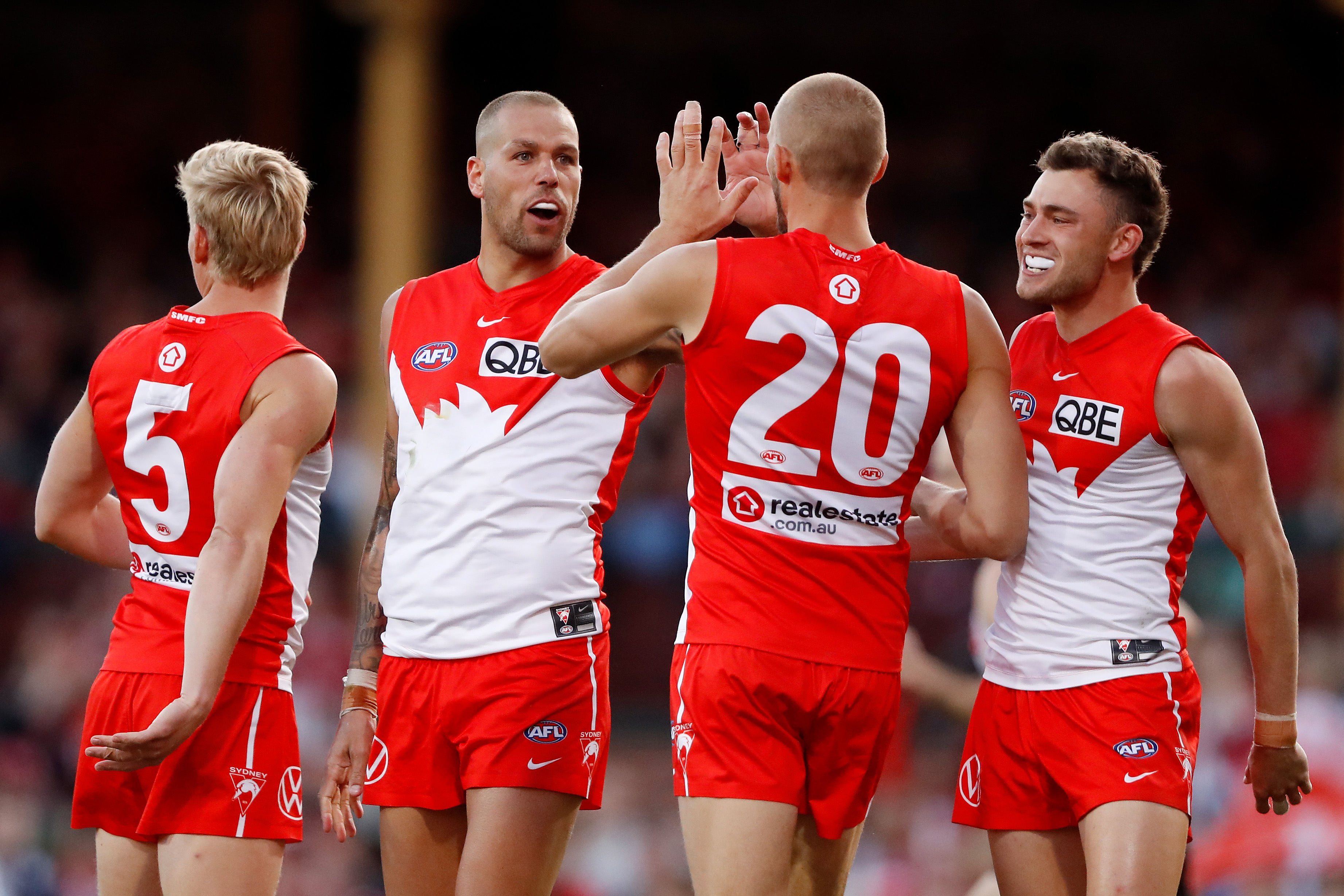 “﻿Really simply, they’re both really flying in attack and defence, but they’ve got different styles with the ball,” Lyon told Nine’s Footy Classified this week.

“Geelong are a ‘go forward’ team now, last year they went back and sideways.

“They’re 1.3 kicks per handball whereas Sydney are two to one, they’re a kicking team who controls the ball.

“They’re a bit more controlled and methodical and it will come in handy against Geelong’s roll-off defence.

“They (Geelong’s defenders) get back on you, they want long, high entries (inside 50) and then they counter-punch. Last year they’d slowly chip, but now they pull the trigger.

“Sydney are not going to bomb it in when they’ve got time and space, they’re going to shift it off the line and lower their eyes.﻿”

Sydney grades extremely well in a number of key defensive acts, and it’ll have to bring its defensive ferocity to the MCG if it’s any hope of beating the Cats. 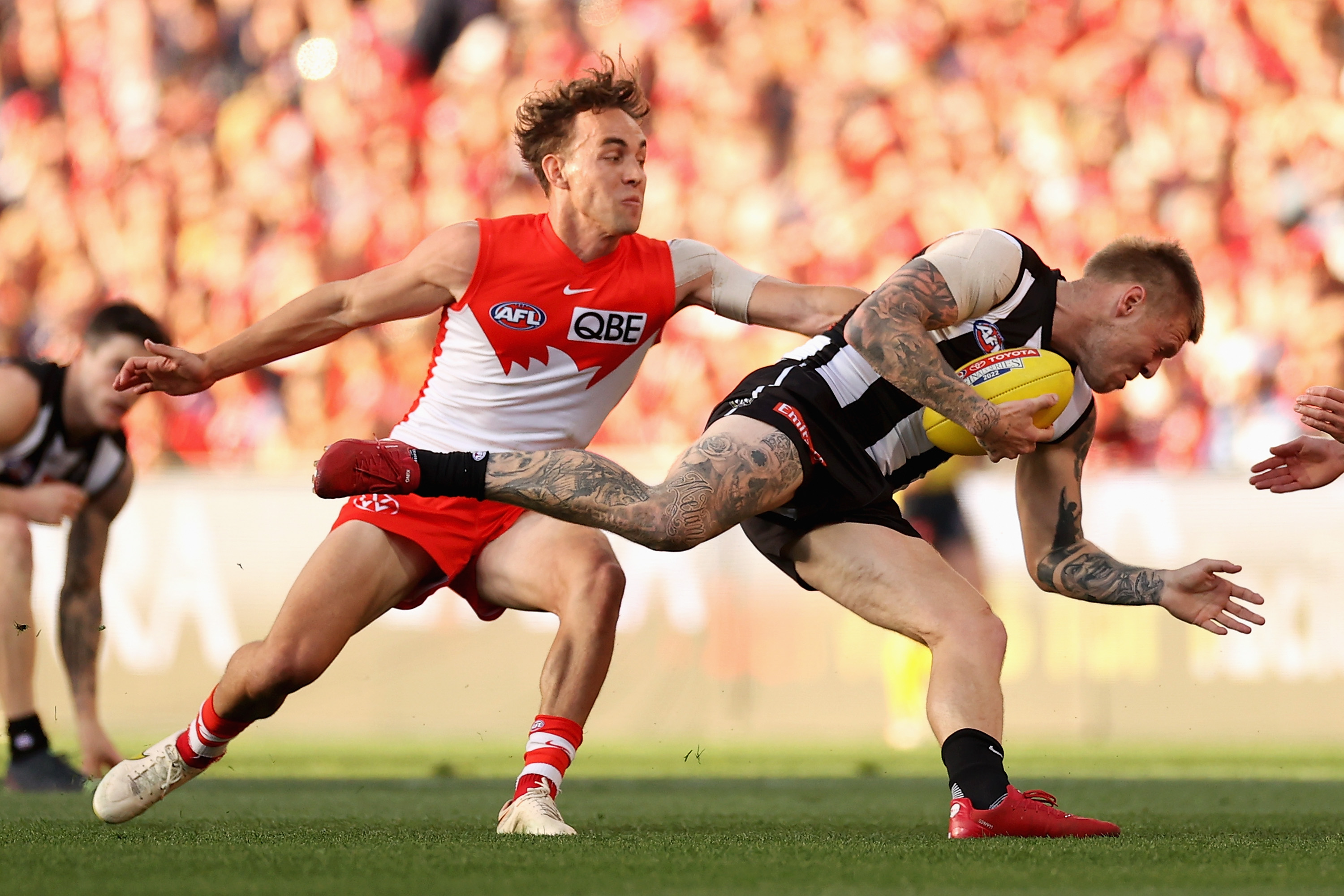 Spend time dawdling on the football and the Swans tacklers will simply devour you. The grand final will only heighten their hunger to get the footy back when they lose possession.

﻿”This is why Sydney will have belief, they’re the No.1 pressure team in the comp,” Lyon said.

“In all aspects they can pressure. If you’re John Longmire, you’re saying, ‘Don’t worry about what Collingwood did, this is what we can do’.

“The numbers say it: the teams that have brought heat to the Cats, the Cats are 50 per cent win-loss.”

Sydney isn’t the only team that will bring the pressure either, with the Cats able to turn it up with the best of them, particularly in their own forward half.

While the twin towers Jeremy Cameron and Tom Hawkins have rightly received a lot of the plaudits, Geelong also possesses an elite group of small forwards in Gryan Miers, Tyson Stengle and Brad Close.

Lyon says the trio’s pressure will have to be at their best to stop the Swans’ lethal transition game off halfback.

Teams who don’t have sound forward-half pressure have been cut up all year by the Swans’ halfbacks and wingers. If you stand around as a forward, the likes of Nick Blakey and Errol Gulden will wreak havoc going the other way.﻿ 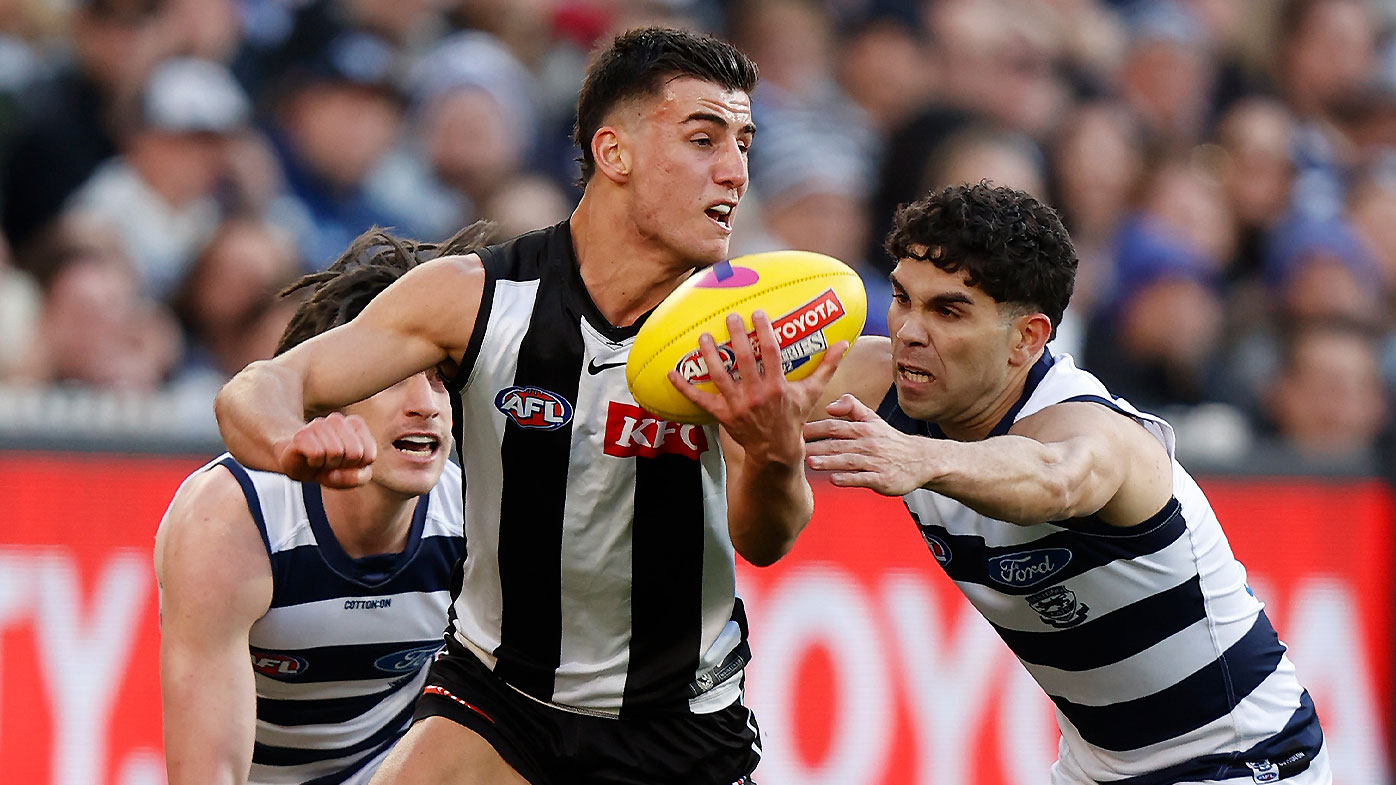 ﻿”No one bounces off halfback better than the Swans,” Lyon said.

“If they can get their run and their kick going through the corridor, they are hard to stop. But what do we know about the Cats’ small forwards? Sure, they kick goals, but they’re the No.1 chase-down tacklers in the AFL with Close, Stengle and Miers.”

Tom Stewart is the AFL’s intercept king, and he’s able to wreak havoc in Geelong’s defensive 50 due to a smart quirk Chris Scott seems to deploy in matches.

Geelong’s preliminary final demolition job against Brisbane was the perfect example of this, as Scott rolled Mark Blicavs into the ruck in stoppages around the ground while moving first-choice ruckman Rhys Stanley behind the football. 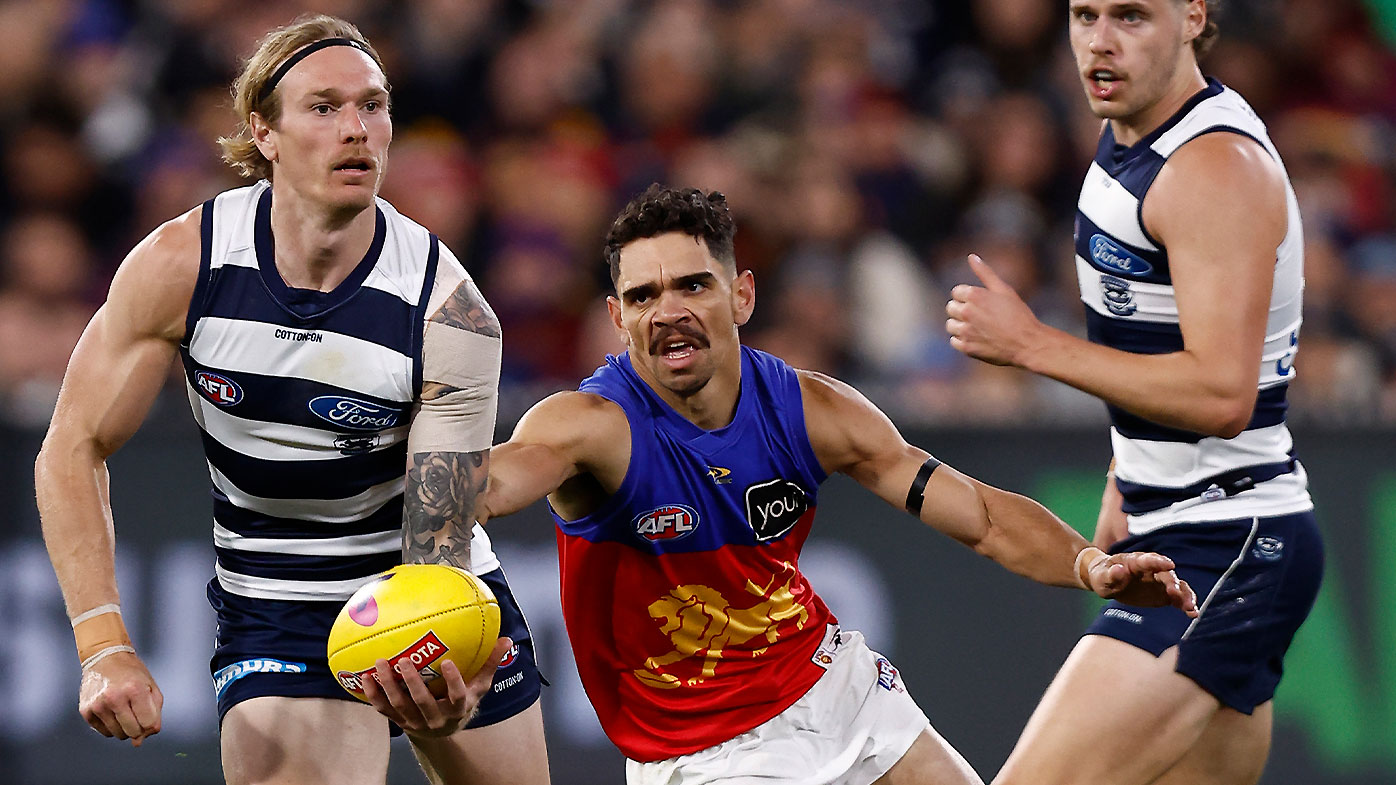 Stanley went straight for the man Stewart would normally be tasked with defending, Brisbane’s Joe Daniher, which allowed Stewart to roam free almost as a goal-keeper.

Sydney’s forwards will have to be diligent in ensuring Stewart needs to focus on the defensive side of the football rather than simply launching counter-attacks.

It will be interesting to see what tactical wrinkle Scott throws Longmire’s way in the opening quarter or so, and how long it takes for the Swans to adjust.