Being in the same field as a family member has its challenges.

In the lead up to the highly anticipated ﻿NFL clash between the Green Bay Packers and Tom Brady’s Tampa Bay Buccaneers on Monday AEST, Runyan Jr had to fend off claims of a “conspiracy theory” when Buccaneers wide receiver Mike Evans was suspended for the clash.

﻿Brady and teammate Leonard Fournette were in a heated exchange with Saints star Mashon Lattimore, when Evans intervened, which ultimately led to an all-in brawl between both sides and a suspension for the Bucs’ wide-out.

And the man who dished out the punishment?

Runyan’s father, Jon Runyan Sr, who is the NFL’s vice president of rules and policy administration.

“He was just doing his job,” Runyan Jr. told reporters this week when asked about claims made on social media.

“He’s been doing that job for over a half-decade now. It just so happens that we’re playing the Buccaneers this week. Everybody’s trying to make it this conspiracy theory, which it’s not.”

Evans’ appeal for the ban for his role in the on-field brawl was denied this week. He was also suspended one game in 2017 for flattening Lattimore with a blindside hit while the Saints cornerback was engaged in a confrontation with then-Tampa Bay quarterback Jameis Winston. 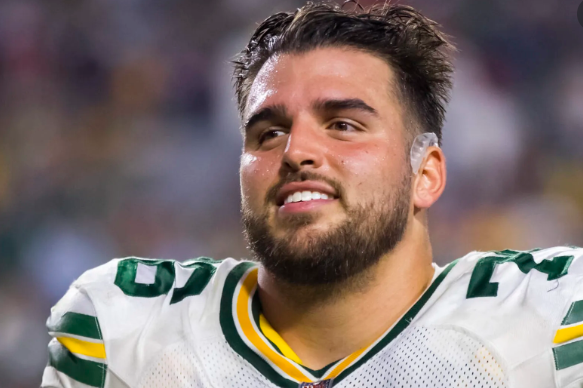 Evans and Lattimore were both ejected, however the Saints player was not suspended.

“My dad’s doing his job,” Runyan Jr. added. “[It was a] lapse in judgment on the field. Sometimes, that stuff happens.

“There’s a whole conspiracy theory going down, and it’s not true. That’s just how it goes.

“You can’t be running 15 yards trying to head-hunt somebody when the play’s over. It is funny, though, how stuff works out sometimes.”

The elder Runyan has served in the role since 2016, following a 14-year NFL playing career with four teams.

Runyan Jr. was a sixth-round pick of the Packers in 2020, and he’s been their starting left guard since last season.

Team’s ‘lucky’ escape after fire breaks out in pits