Australian tennis great Wally Masur has suggested Nick Kyrgios may have to give up his doubles partnership with Thanasi Kokkinakis if he is to achieve his goal of winning a singles grand slam title.

Kyrgios was left crestfallen after his elimination at the hands of Karen Khachanov in the US Open quarter-finals on Wednesday in a five-set thriller.

It was a bitter end to what’s been a successful grand slam calendar year for the Aussie, who had become one of the favourites to take out the US Open after dispatching No.1 seed Daniil Medvedev in the fourth round.

The 27-year-old looked physically laboured throughout his clash with Khachanov, having his left leg attended to by trainers, and Masur said the toll of playing both singles and doubles may have caught up with Kyrgios, despite the Aussie downplaying the severity of the injury in the postmortem. ﻿”I﻿ love that comment from Pete Sampras, you can’t win a major in the first week, but you sure can lose one,” he told Stan Sport’s Grand Slam Daily.

“If the workload is too great and then you’re playing the better players in the second week, you can pay a price.

“He loves playing with Thanasi, they’re the Australian Open winners, he brings a lot of energy to the tournament, but there was eight extra sets of doubles.

“It’s not just the match, it’s getting to and from the court, cooling down, having lunch, doing the press, having treatment, going home, so it’s this lengthy process of a match day and he never really got that complete rest and rehabilitation.

“You’ve got to remember in that first week they were playing in 35-degree heat and 80-90 per cent humidity, so it took a toll. 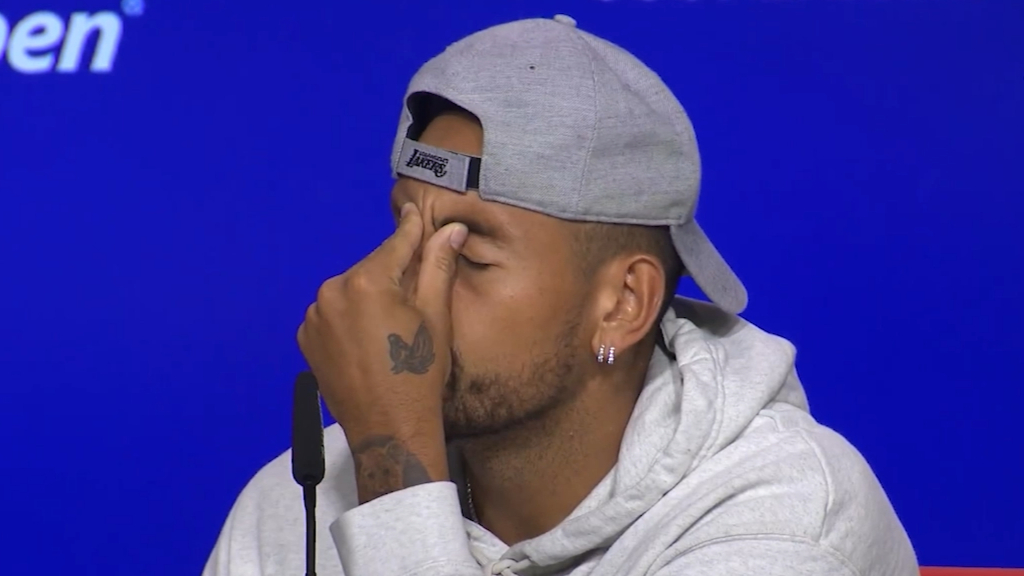 “I’m not saying that’s the reason for it, and I’m really pleased that he did play doubles, but it is very difficult for a top-flight singles player who can win a slam to play both events.”

The decision facing Kyrgios is similar to that faced by Serena Williams, who drastically cut down on her doubles matches towards the back end of her career, despite enjoying incredible success in the format.

﻿Williams won 14 doubles grand slam titles partnered with her sister Venus, but nine of those titles came prior to 2010.

Kyrgios’ only career grand slam title has come while partnered with Kokkinakis when the pair took out the Australian Open title earlier in the year, eliminating the then-world No.1 men’s doubles pairing in the process.

﻿The Aussie pair, who have been dubbed the ‘Special Ks’, entered the US Open as the eighth seed, but had their tournament ended by the No.11 seeded pairing of Lloyd Glasspool and Harri Heliovaara in the third round.