Pakistan teenager Naseem Shah smashed back-to-back sixes in the last over against Afghanistan for a one-wicket victory that sets up the Asia Cup final against Sri Lanka.

Needing 11 off the last over and with only one wicket in hand, the 19-year-old Shah clobbered consecutive sixes off fast bowler Fazalhaq Farooqi’s two low full tosses to take Pakistan to 9-131.

In a game dominated by bowlers, Pakistan also did well to restrict Afghanistan to 6-129 through its pacers and spinners. Shah had earlier clean bowled captain Mohammad Nabi for a golden duck to finish with 1-19.

Tempers flared toward the end when fast bowler Fareed Khan reduced Pakistan to 9-118 in the 19th over by having Asif Ali (16) dismissed.

The players exchanged words as Asif raised his bat close to Fareed’s face and they pushed each other before Afghanistan players rushed to separate the two (watch the video at the top of the page to see the exchange). 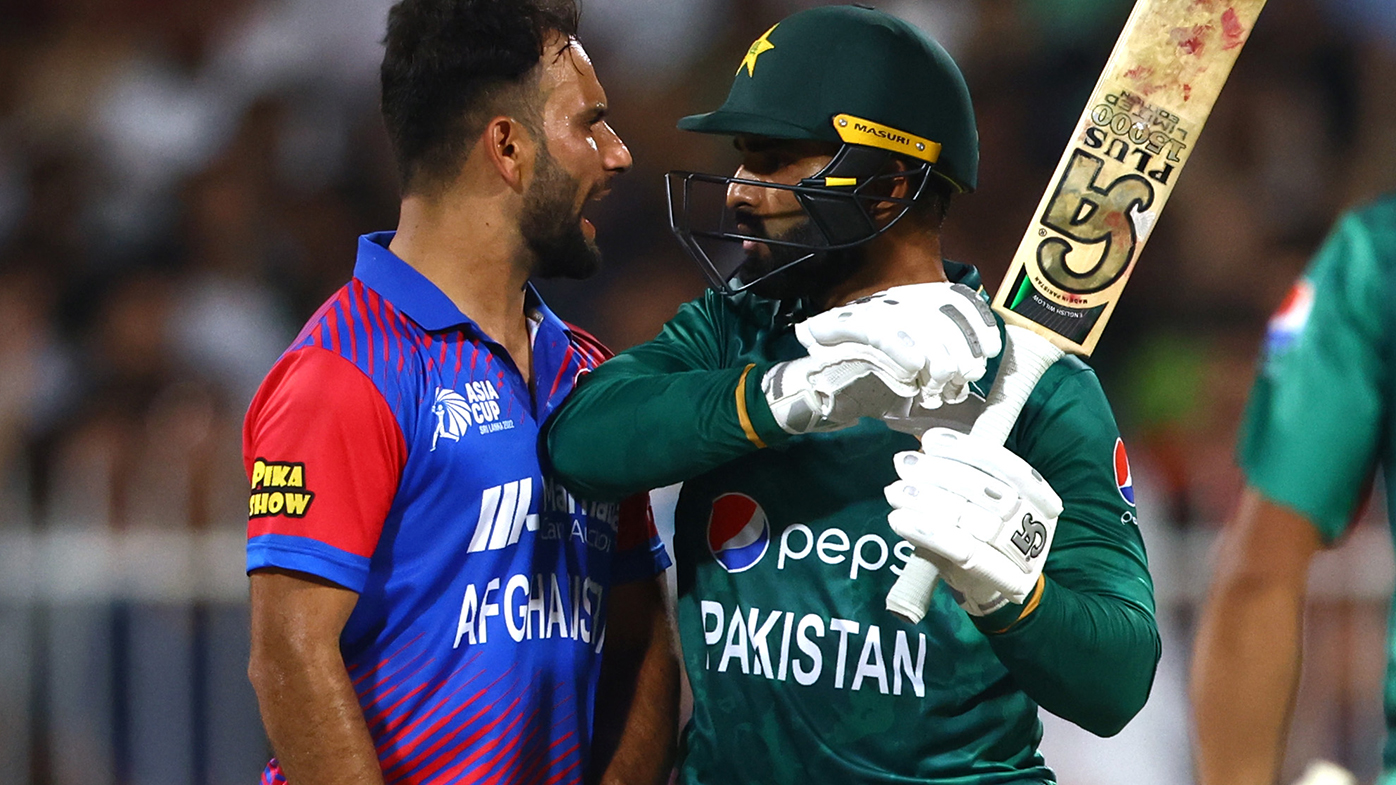 A jubilant Shah threw away his helmet and batting gloves while sprinting toward the dressing room once his last hit sailed over long off and his teammates also rushed onto the field to celebrate the breathtaking win.

The left-armer Farooqi had put Pakistan on the backfoot when he trapped Babar leg before wicket for a golden duck and then struck twice in his penultimate over before bowling two full tosses to Shah in the last over to end up with 3-34. 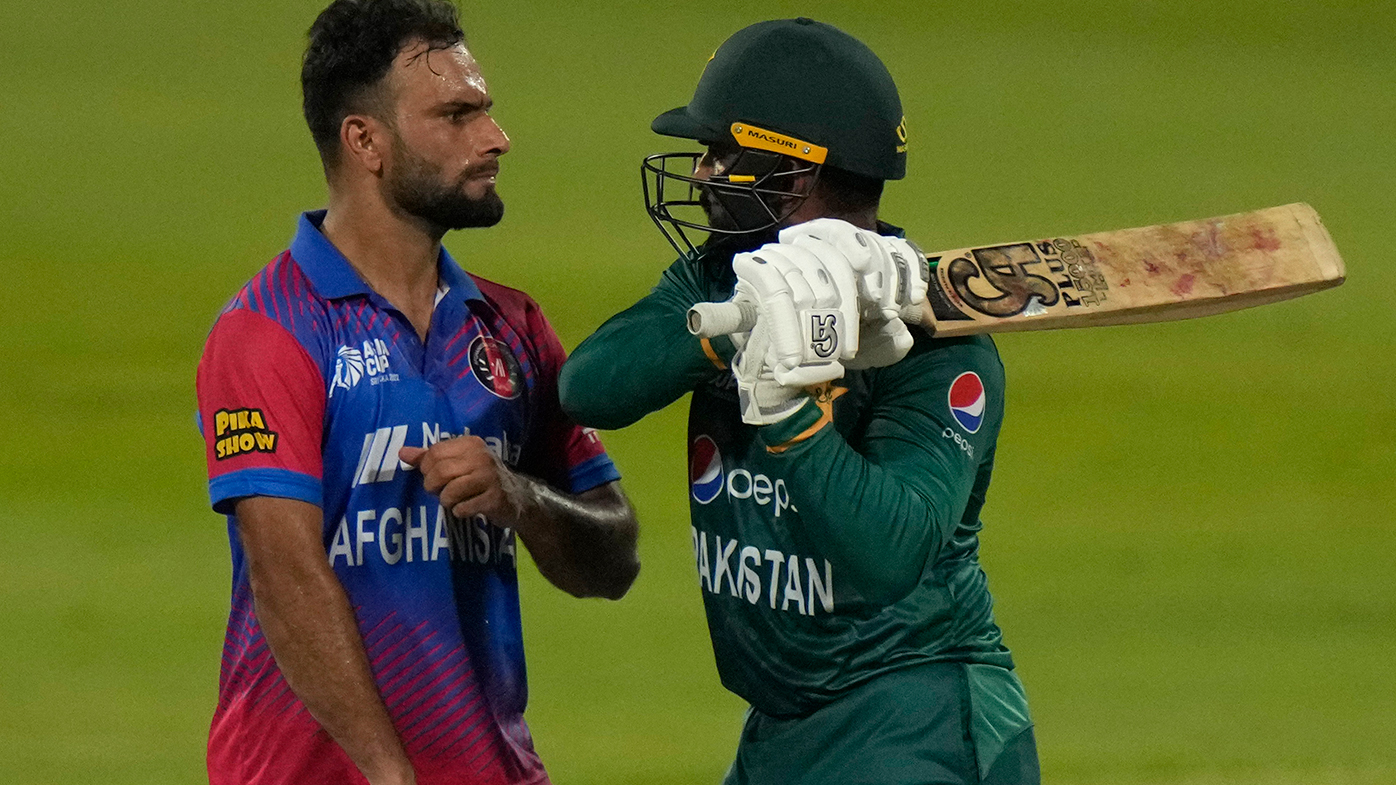 Babar has struggled in the Asia Cup after his four straight below-par scores of 10, 9, 14 and 0, but Pakistan’s middle-order has done well in the tournament in run-chases. 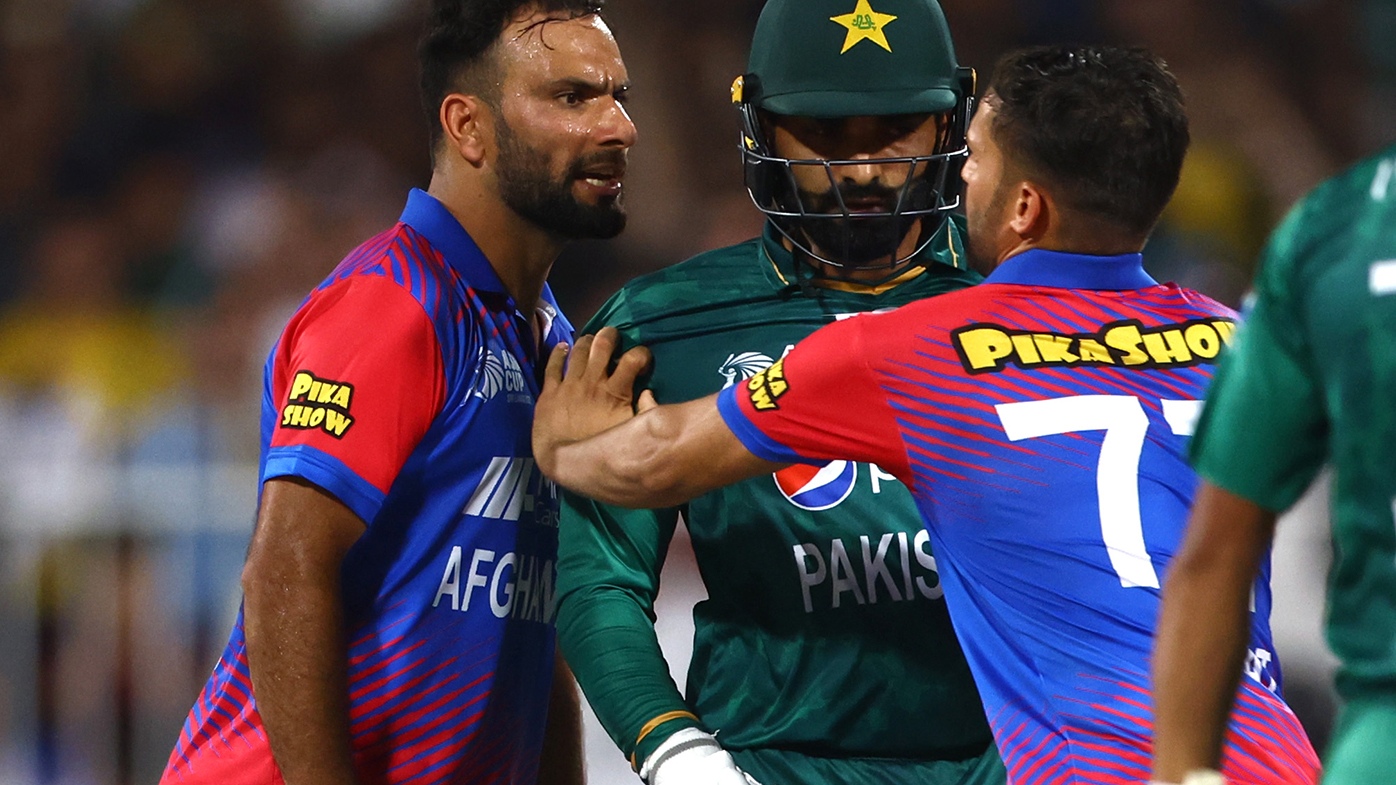 But Afghanistan didn’t give up in the death overs and claimed six quick wickets once Fareed Khan (3-31), playing his first game in the tournament, had Iftikhar caught at deep midwicket in the 16th over.

Shadab also went down in the next over as he top edged Rashid to backward point after hitting the leg-spinner for a six, but couldn’t resist going for another big hit.

Earlier, after being put in to bat Rahmanullah Gurbaz and Hazratullah Zazai perished against Pakistan pace inside the batting powerplay. Spinners Mohammad Nawaz (1-23) and Shadab (1-27) dried out the runs in the middle overs as Afghanistan batters struggled to push the scoring rate.

Shadab claimed the key wicket of Najibullah Zadran (10) and Haris Rauf varied his pace in the death to finish with 2-26 as he got rid of top-scorer Ibrahim Zadran (35).

“The boys were brilliant with the ball and in the field, but again we didn’t finish well,” Nabi said. “We didn’t control our nerves at the end. We gave two options to the bowlers, slower balls and yorkers, and sadly we couldn’t execute it when we needed to.”