4am Bob Hawke exchange that led to iconic TV moment

It’s perhaps the most famous quote uttered by an Australian prime minister when talking about a sporting event.

“Any boss who sacks anyone for not turning up today is a bum,” said Bob Hawke, on the morning of Australia II’s historic America’s Cup win in 1983.

But for the skipper of Australia II, John Bertrand, an exchange with Hawke earlier in the campaign is just as memorable.

Bertrand was speaking to Wide World of Sports ahead of the release of the Netflix documentary Untold: Race of the Century, which tells the story of Australia’s win, the first time in 132 years the Americans had lost the cup.

It includes the last-ever interview with Hawke, before his death in 2019.

“Bob came down and I greeted him, I was on the back of the boat, the Boxing Kangaroo flag was flying, Down Under by Men at Work was playing,” Bertrand said.

“He came down to the dock and I said, “Good Morning, Mr Prime Minister” because you show respect to the position. 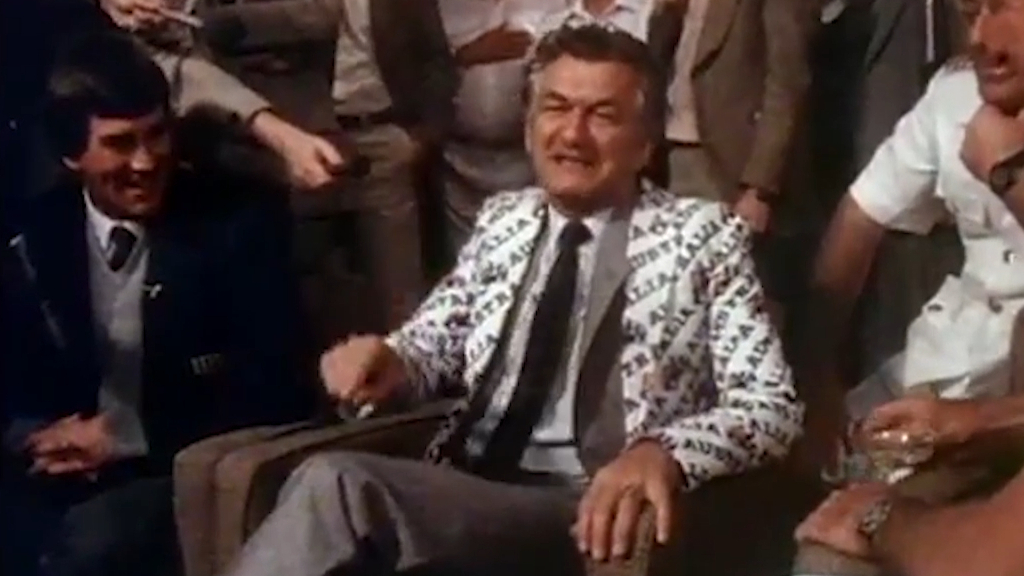 Nearly four decades on, Bertrand can still remember the advice from Hawke.

“He replied, ‘Bullshit, destroy the bastards.’

“I thought that was fantastic. Talk about a man seizing the moment.”

Australians woke up on the morning of September 27, 1983, to the news that America’s stranglehold on the cup was over, and Hawke, just six months into his tenure, was very much front and centre.

“They happened to be in Perth for some deal that morning,” Bertrand said.

“The Prime Minister and his entourage, including his security people, were watching.

“Bob said a lot of guys were going to sleep, because it was three or four o’clock in the morning. 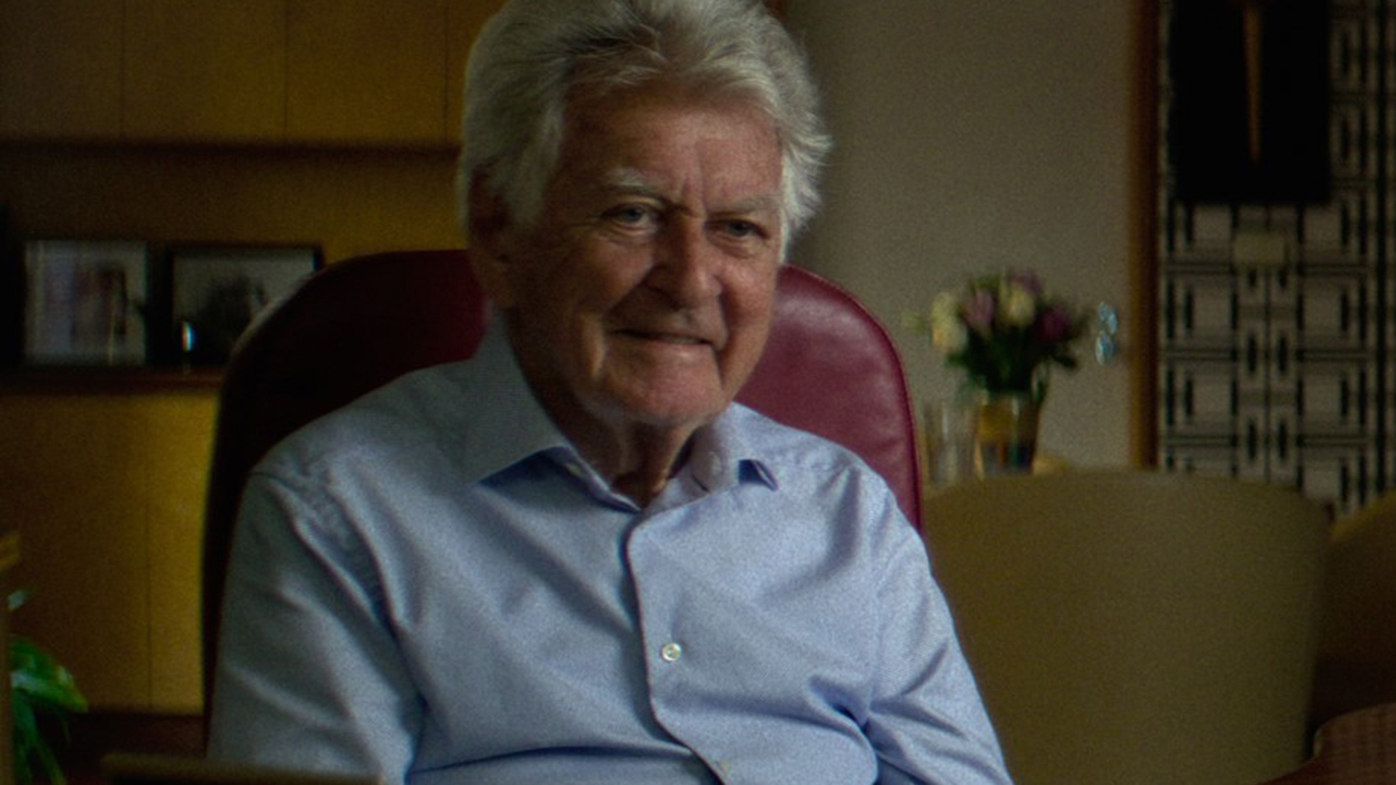 “And Bob said, this is bullshit, let’s go down to the yacht club. And he did. That just took it to another level.”

Hawke was a noted sports nut, but for any prime minister the opportunity to bask in the glory of the nation’s success couldn’t be missed.

“When he said those famous words after we won, that any boss who sacks anyone for not turning up today is a bum, that was Bob Hawke,” Bertrand recalled.

“He said to me many times over the years, that of all the great things that he and Paul (Keating) did, floating the dollar, deregulating the economy, the massive changes in that era, he said the thing that people remember is, ‘Any boss who sacks anyone for not turning up today is a bum’.”

Bertrand explained that Untold: Race of the Century was more than three years in the making, noting that Netflix producers had “honoured the story really well.”

“It was Everest. It had never been conquered,” Bertrand said of the 1983 victory.

“It was like Edmund Hillary. Now there’s 500 people who climb Everest a year. But being the first nation to beat the USA, it was remarkable. Nobody had ever done it. Most people told us we were crazy, and most nations thought it was impossible.” 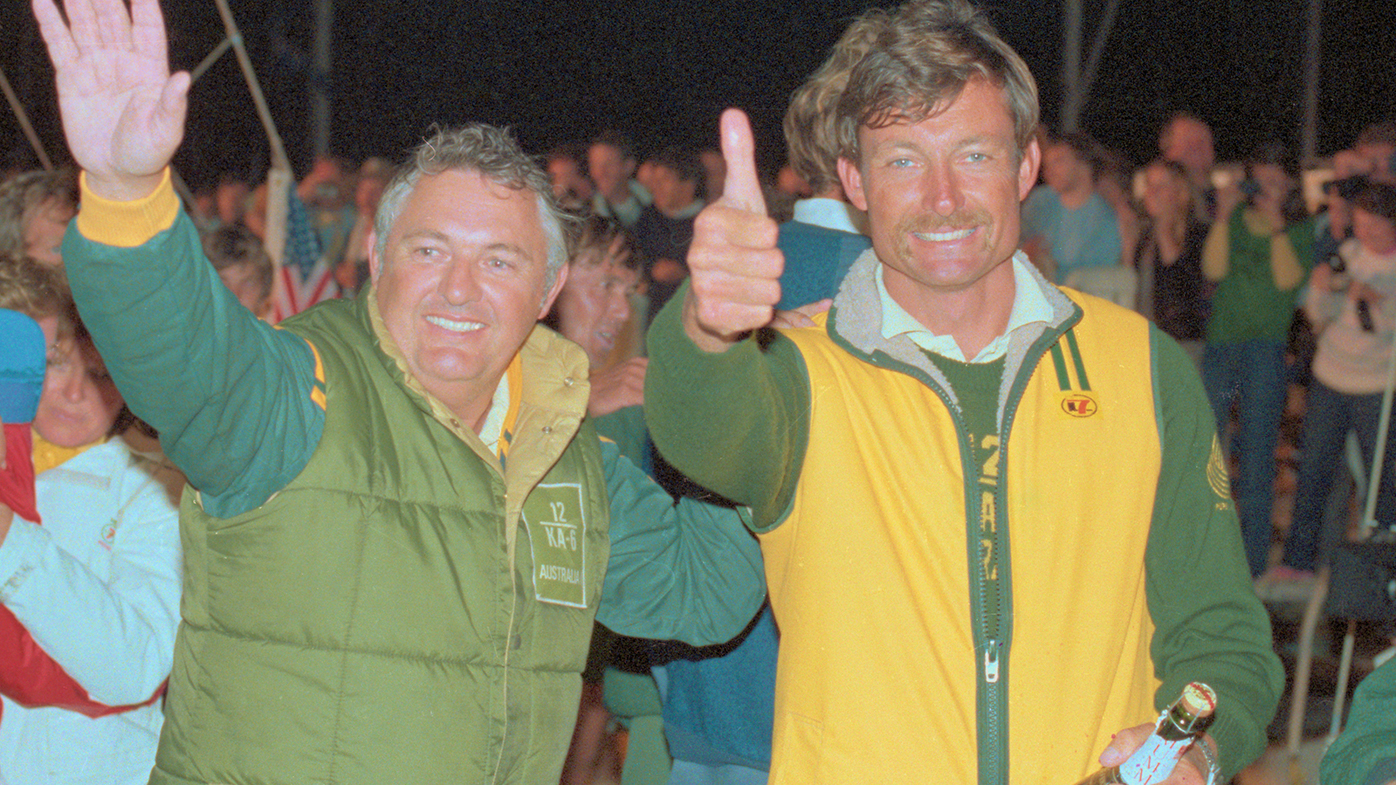 Australia had been trying for two decades to wrest control of the cup from the Americans, firstly with challenges from Sir Frank Packer, before the mantel was passed to Perth businessman Alan Bond.

“He was a remarkable individual. A lot of money was made, and a lot of money was lost. You talk about never giving up, that was his fourth America’s Cup campaign, people don’t realise that.

“He first challenged in 1974 when he was 34-years-old. You talk about the chutzpah of the man, to even perceive at such a young age that he could win. He got blown away in 1974, but he came back in 1977 and 1980 and eventually 1983. He was remarkably persistent, and without Alan and his long-term commitment, there’s no way Australia would have won.

“I never worked for Alan, I worked with him. Working with him, in partnership, was the only way it could work, certainly from my perspective.”

Central to Australia’s success in 1983 was the famous winged keel conceived by designer Ben Lexcen, but Bertrand concedes he wasn’t immediately won over by the idea. 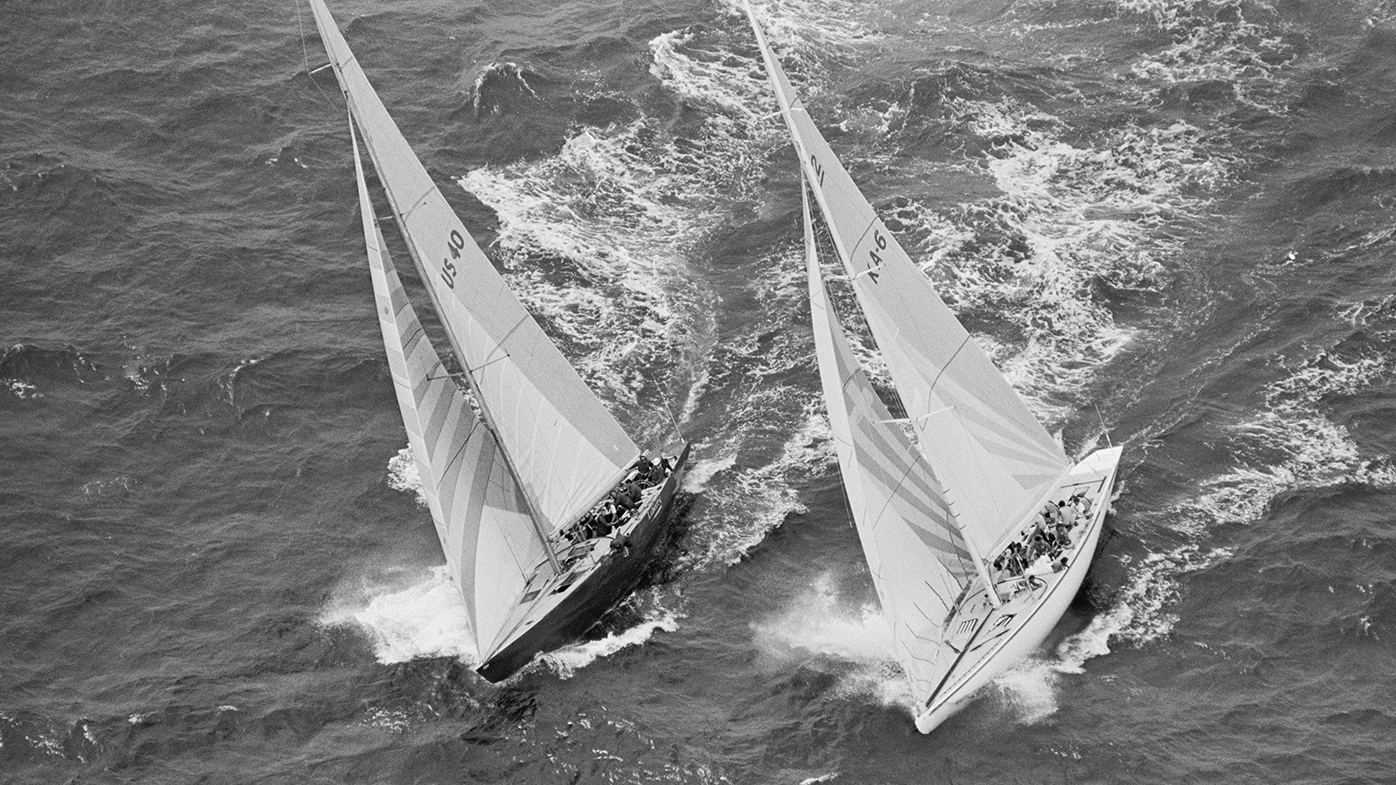 “I was horrified,” he laughed.

“I’d worked with Ben in 1974 on the design of Southern Cross. I knew how he worked. In my opinion he was the Leonardo Da Vinci of this country. Just remarkable.

“But I also knew of the crazy ideas that weren’t successful. It’s like anything. Ten crazy ideas out of left field and maybe two could work.

“All I wanted was some decent equipment and we’d go and get the job done. The keel was just so damn different. It was a high risk call, but the decision was made to build it.”

Bertrand conceded that they had a contingency, in the form of a sister ship for Australia II that had a conventional keel, named Challenge 12.

“When we first put Australia II in the water, over in Fremantle, we went sailing against Challenge 12. We went sailing for about 20 kilometres and into the wind, there was really no difference.

“Then we turned and put the spinnakers up and sailed with the wind, and Challenge 12 sailed away from us.

“So that was the start of a journey of trying to optimise what we had, and there were lots of changes. Like motor racing, we had to refine what we had. We were eventually highly competitive, but it took a lot of work.

“It was a huge effort by a highly-focused group of people, who were highly compatible, who had total trust in each other. No idea was too silly. It was a matter of making one plus one equal three.” 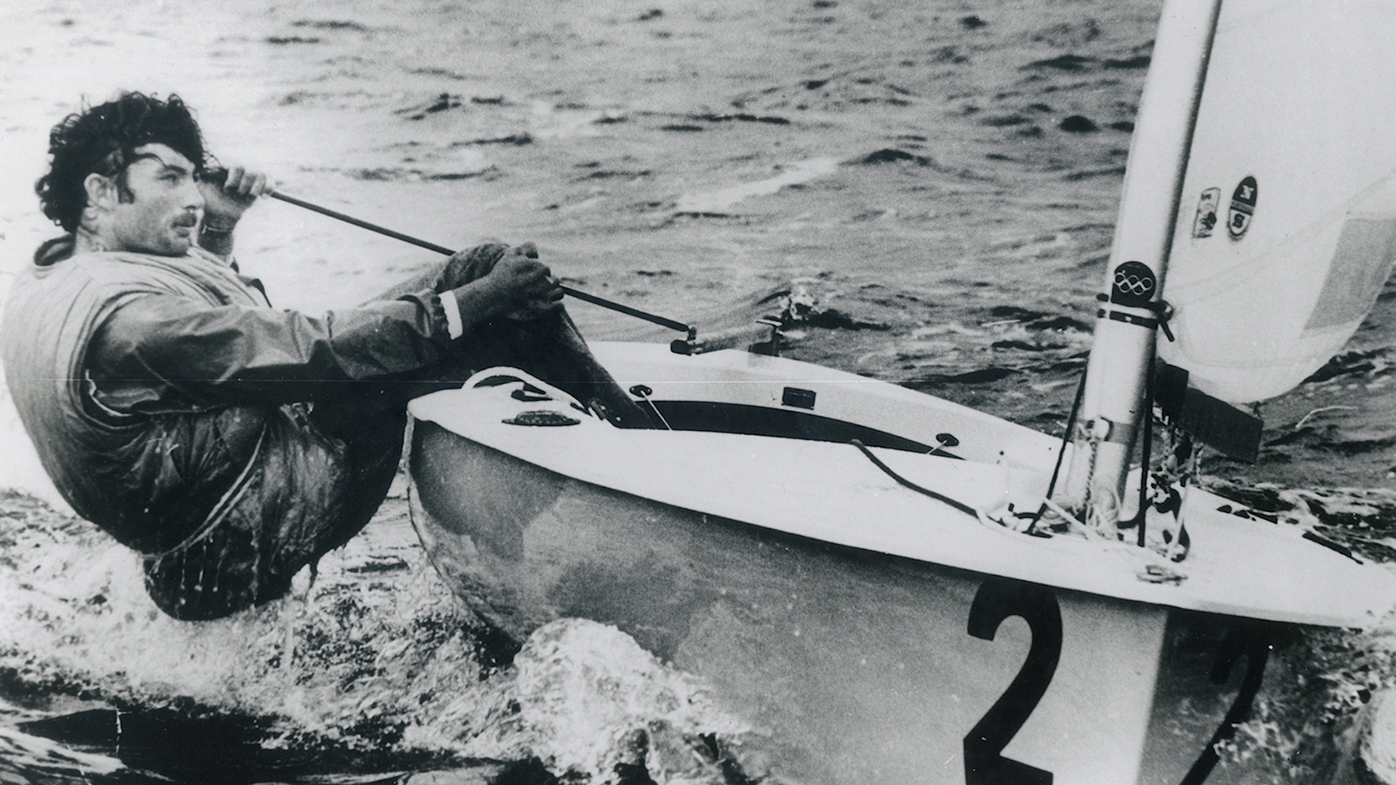 The city of Newport, Rhode Island had hosted the America’s Cup since 1930, and as author Michael Levitt noted in a book that chronicled the 1983 campaign, the cup had come to symbolise “arrogance and power and money.”

“The Americans were not in the business of losing,” Bertrand said.

So much so that it wasn’t until Australia had levelled the best-of-seven series at three-all that members of the New York Yacht Club made plans to even bring the trophy to Newport from its usual home at the club’s headquarters on West 44th Street. Up until that point, it seemed unthinkable that the Americans would lose. After all, they’d won three of the last four campaigns 4-0, the only blip on their record coming in 1970 when they’d won 4-1.

Australia had kept its keel under wraps all through the summer as it fought to earn the right to challenge the Americans, covering it with a giant sheet whenever the boat was out of the water. Bertrand explained that the effort of doing so paid off later in the campaign.

“That was really interesting, and we didn’t realise the full significance of that at the time. It was a pain in the arse to wrap the boat up each time,” he said.

“It meant that when we came onto the world stage to race against the Americans, they didn’t know what they were racing against, because we’d kept the keel covered.

“As it turned out, psychologically I think that was one of the reasons the Americans made some mistakes in that final race.

“If you look at the whole tapestry of that summer, the stuff between the ears is very relevant. We were starting to spook them and that was significant.”

Since the America’s Cup moved to a best-of-seven series, this was the first time race seven had been required, which the media immediately christened the “Race of the Century.” 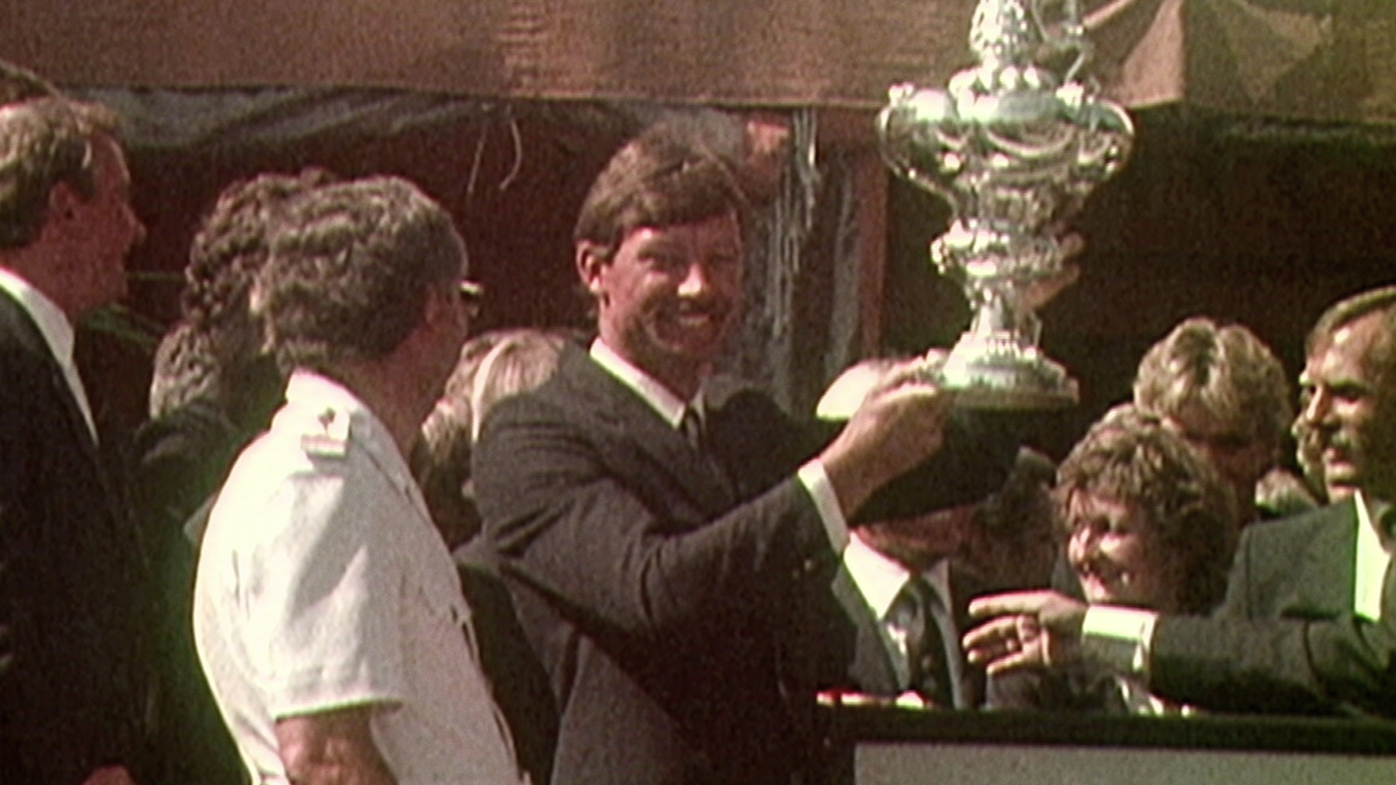 “On the dock before race seven you couldn’t really communicate with anyone more than a metre away, just because of the noise,” Bertrand said.

By the time Australia II and Liberty, skippered by Dennis Connor, reached the fourth mark, the Americans had a 57 second lead, their second biggest of the seven races.

But the spinnaker leg, which had been Australia II’s weakness in its very first trial back in Fremantle, now proved the difference.

“There was 1000 spectator boats out there, none of them smaller than 150 feet long, so the water was like a washing machine,” Bertrand explained.

“You couldn’t see the wind on the water. We came around behind them with a bit more breeze.

“They didn’t realise that, and it would appear they panicked, jibed away to try and find extra breeze. We were sailing the boat as close to perfection as we had ever done that summer.

“That’s how focused we were.”

The eventual winning margin was 41 seconds, and America’s 132-year reign was over.

“The final leg there was something like 47 tacks. They got within a boat length of us, they were fast,” Bertrand said.

“We won by 41 seconds, Grant Simmer, our tactical navigator, epitomised that, he said, ‘John, 41 seconds between being a hero and a bum.’

Untold: Race of the Century is available on Netflix from September 6.