You never know what you’re going to get with Nick Kyrgios – but you know it’ll never be boring.

In his pulsating 7-6 (13-11), 3-6, 6-3, 6-2 win over number one seed Daniil Medvedev; we saw glorious stroke play, one of the biggest brain fades of all time, a couple of racquet tosses, and ultimately, the biggest win of his career.

What’s next? Who knows. It’s doubtful even the man himself does.

There’s no denying he has improved out of sight in 2022, and whatever it is, it’s all clicking for the Australian at the moment.

“I’m still trying to figure it out, honestly,” he said afterwards.

“I’m just trying to work hard every day, make every practice session count. I’d probably be out every night before. Now I’ve got a great girlfriend, she helps me, and my team.

“It’s all my team. I’m just really happy and hopefully I can keep it going.” 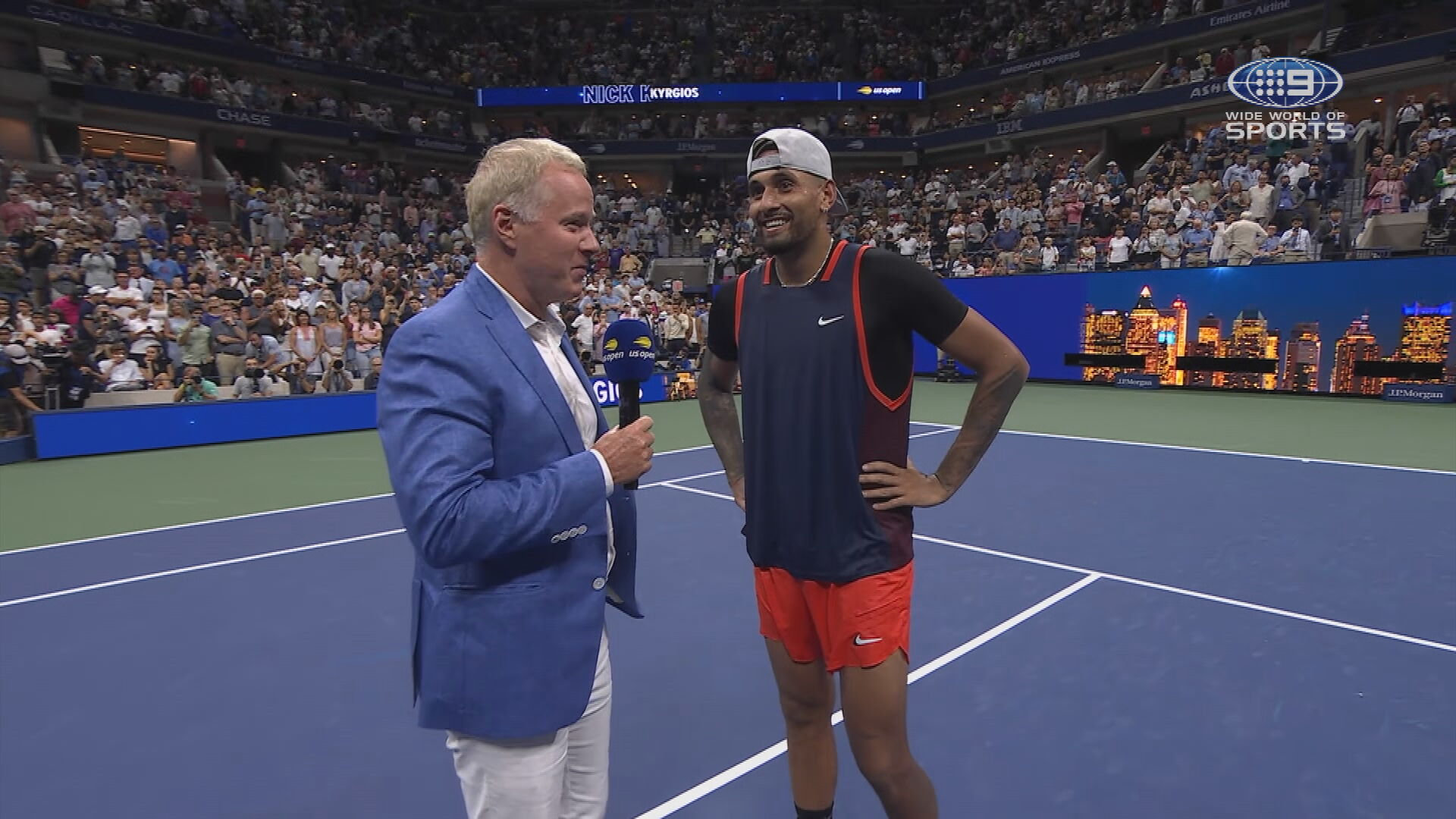 Next up is another Russian, 27th seed Karen Khachanov – who survived a five-set epic against Pablo Carreno Busta.

Bizarrely, the turning point in the match may well have been that catastrophic mistake, where Kyrgios was charged with a ‘foul shot’ penalty a ball from Medvedev that was miles from landing in the court.

But a break point chance thrown away for no reason instead helped Kyrgios re-focus – he’d lost the second set and was getting into his own head as yelling at himself, his box, and the umpire becoming more frequent.

But that mistake was so comical that all he could do was shake his head and laugh as the red mist evaporated.

It clearly helped him reset his mind, and it was full steam ahead from that point on. 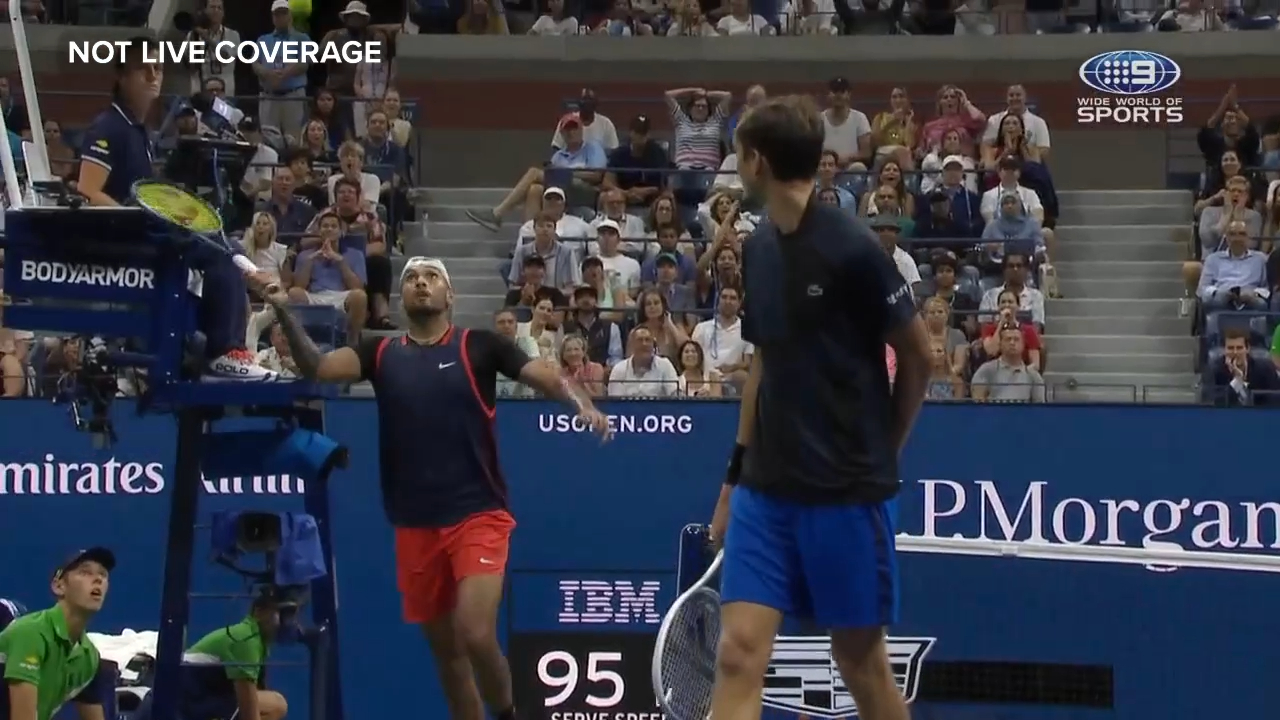 He broke Medvedev in the next game, and found two more in a comfortable fourth set, with his aggressive shot selection and unpredictability wreaking havoc on the Russian’s game.

“It was an amazing match – obviously Daniil is defending champion, a lot of pressure on his shoulders – but I played really well, I’ve been playing amazing the last couple of months,” Kyrgios said.

“What a place to do it, packed house in New York. I’m extremely blessed.”

While a run to the Wimbledon final is only just in the rear-view mirror, the level of play from Kyrgios against Medvedev was as good as we’ve ever seen from him.

Todd Woodbridge said it was the “best match I’ve seen” at a grand slam from Kyrgios, while Jelena Dokic said it was his “biggest win”. 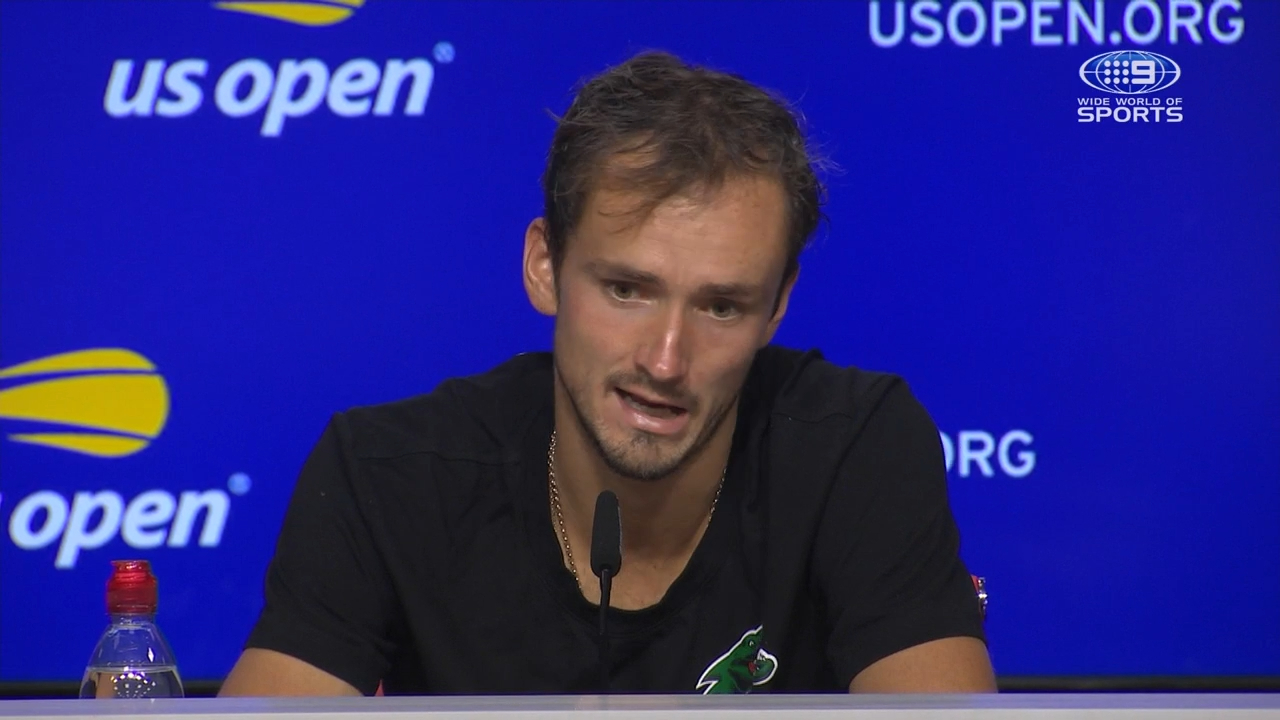 “That was not just great tennis, the serving display, but the mental strength,” she added.

And it’s the latter that has always been Kyrgios’ undoing – if he can keep his focus and drive for just a few more days, a singles grand slam title awaits.