Scott McLaughlin has put on a clinic in the penultimate race of the IndyCar Series, dominating the Grand Prix of Portland.

The Kiwi led home stablemate Will Power for a Team Penske one-two finish while Scott Dixon put on a classy performance of his own for Chip Ganassi Racing, rising from 16th to third.

In what was a relatively straightforward race for McLaughlin, the No.3 pilot led 104 of the 110-lap race distance and never looked troubled on his way to a third series win. 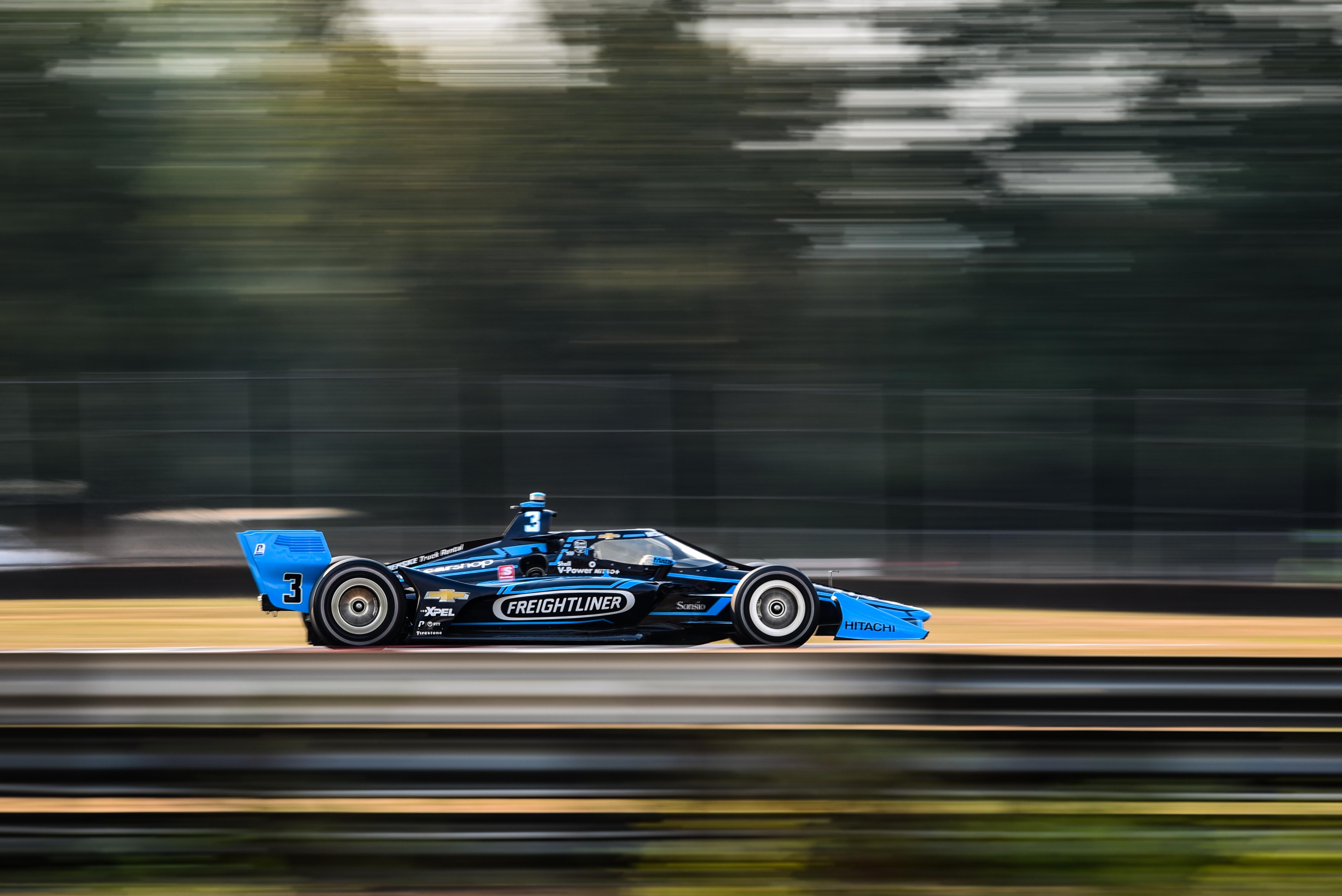 “The Freightliner Chevy all weekend has been really fast and been right there when we needed it,” said McLaughlin.

“The team, the Thirsty Threes, got the job done in the pits. I’m really proud of them.

“We did exactly what we needed to do this weekend and that was win, get max points, and keep ourselves in the fight.

McLaughlin sits 41 points out of the championship lead with one race remaining having come into the second-to-last race of the year 54 points in arrears.

It’s been a scintillating second year for the three-time Supercars champion, who came out of the touring car championship and into IndyCar without any single-seater experience.

“When Roger [Penske] and Tim [Cindric] gave me the opportunity to come over here, I was thankful for that, but it was my next step, my next challenge,” said McLaughlin.

“I took it onboard very seriously. I knew it was going to be hard but thought one day I could win.

“The ultimate is to obviously win a championship and a[n Indianapolis] 500 and I’m not going to stop until I get one of those – or at least both.

“It’s a long road to climb, but you’ve got to have goals. It’s the same for everyone out there, you’ve just got to have dreams, dream big, and try and get it done.”

From the head of the field, McLaughlin set the tone of the race as he took the holeshot into the chicane and skipped away from the field.

Points leader Power was quickly dethroned for second as Rahal Letterman Lanigan Racing’s Christian Lundgaard went around his outside at turn two.

Romain Grosjean of Andretti Autosport was bundled out in the opening lap melee. A pass around the outside of Dixon and AJ Foyt Racing’s Kyle Kirkwood ended with the Frenchman off the road and shorcutting turn five.

At the end of lap one, it was McLaughlin who led Lundgaard, Power, Pato O’Ward, Alex Palou, David Malukas, Felix Rosenqvist, Colton Herta, Alexander Rossi, and Josef Newgarden – the latter who ceded two spots off the start.

McLaughlin quickly skipped out to a three-second lead. The first round of pit stops began on lap 12 when Grosjean ducked for the lane. At the point, McLaughlin ran long, waiting until lap 21 to make his first stop. 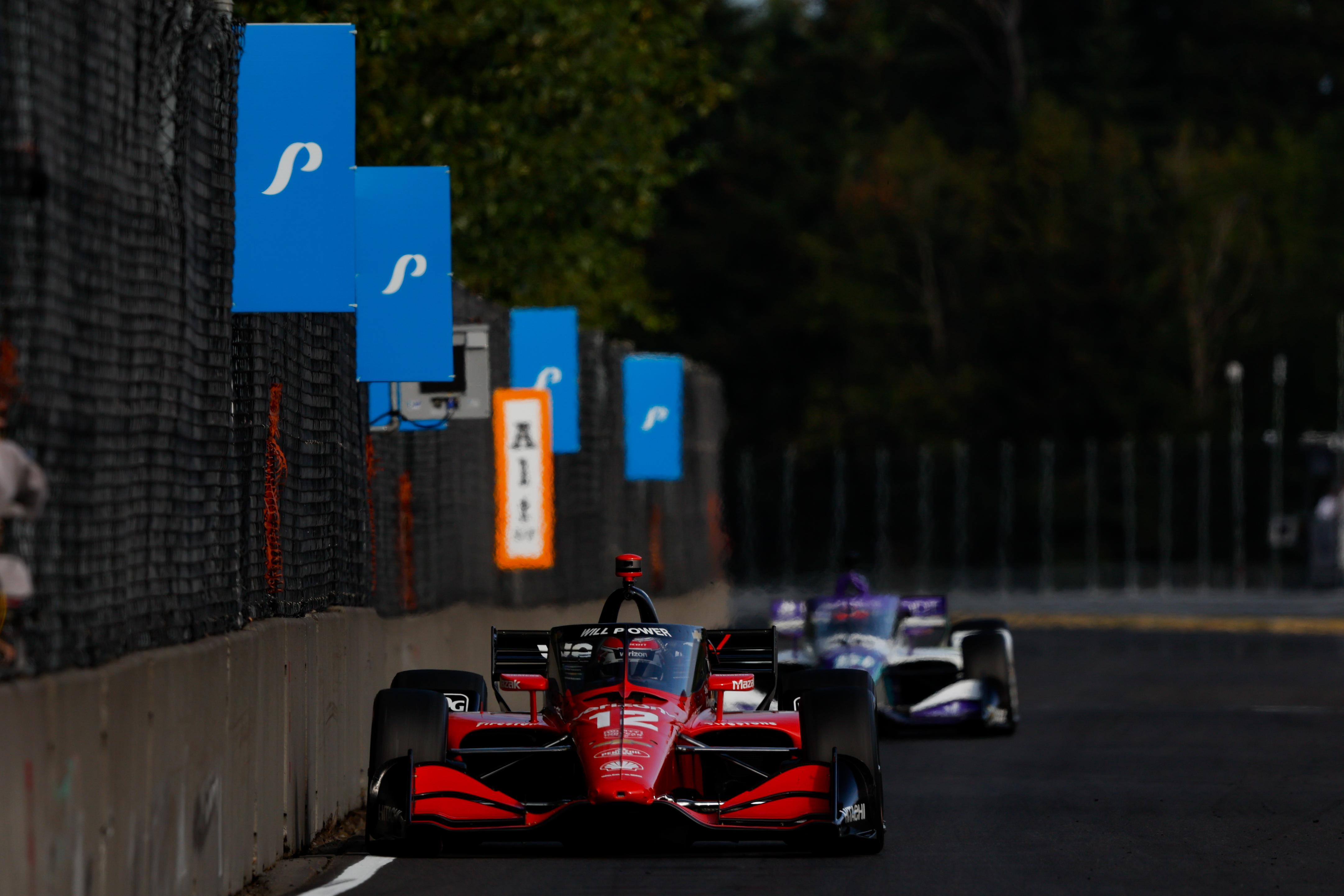 Once the pit stop sequence was completed, McLaughlin held a four-second advantage over an out of sequence Marcus Ericsson, Power, Lundgaard, and O’Ward.

The second stint of the race saw Newgarden rise through the field after a slow start to proceedings, coming through to fifth.

The second round of pit stops came and went without much significant movement in the pecking order.

The most important stop of all came on lap 79 when McLaughlin, Power, O’Ward and Newgarden all pitted at once.

At the time, McLaughlin held a 3.7-second lead over Power, though that shrunk to a little over one second after Felix Rosenqvist baulked the race leader out of the pits.

The race ran incident-free until lap 82 when a bizarre clash between Rinus VeeKay and Jimmie Johnson ended with the latter in the wall. 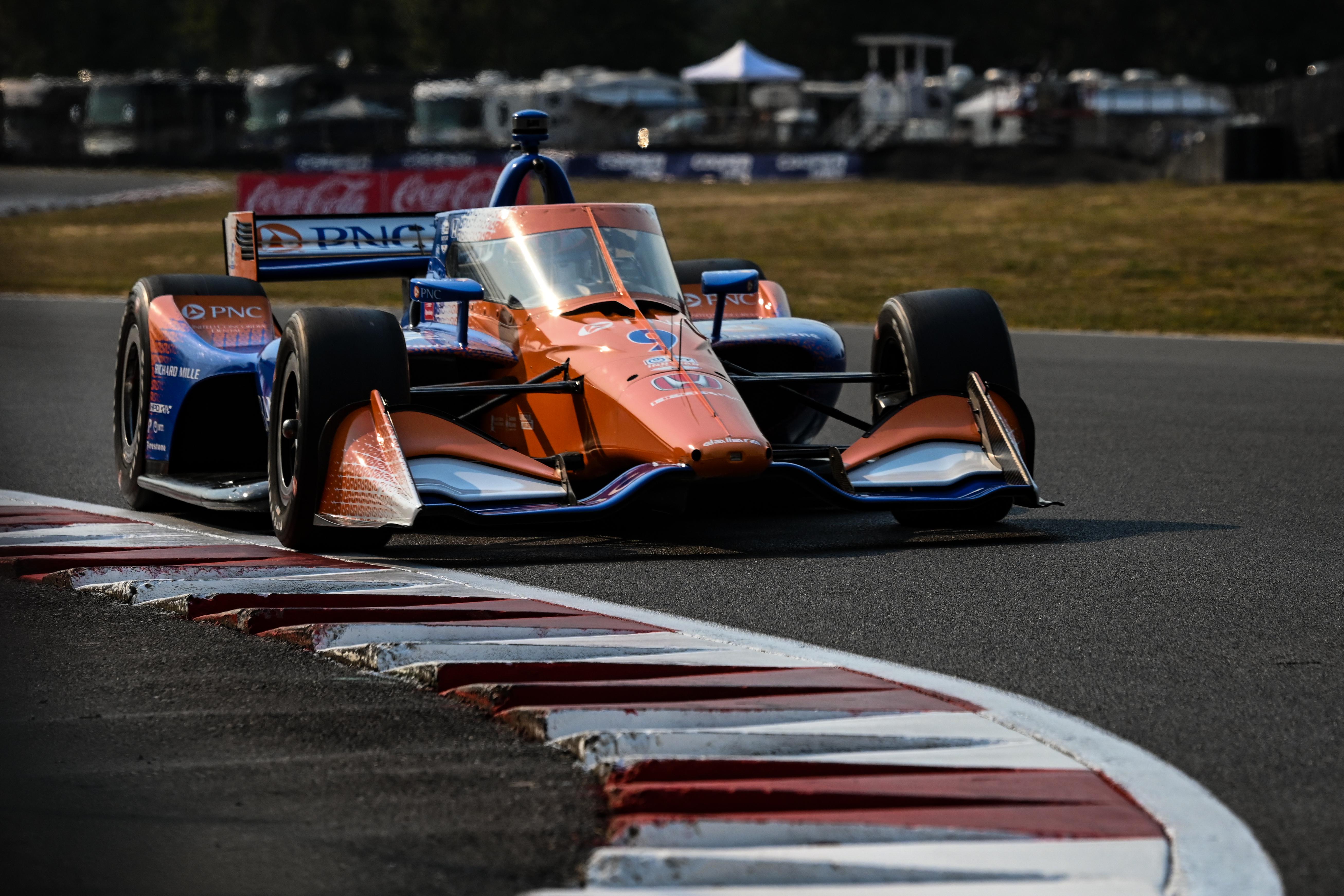 The pair were side-by-side entering turn one when VeeKay came across the bow of Johnson, made contact with his right front wheel, which speared him into the adjacent wall.

“Rinus VeeKay just assumed Jimmie was going to lift at that point and not carry his line into that corner. Very surprising. Jimmie is as surprised as anyone.” 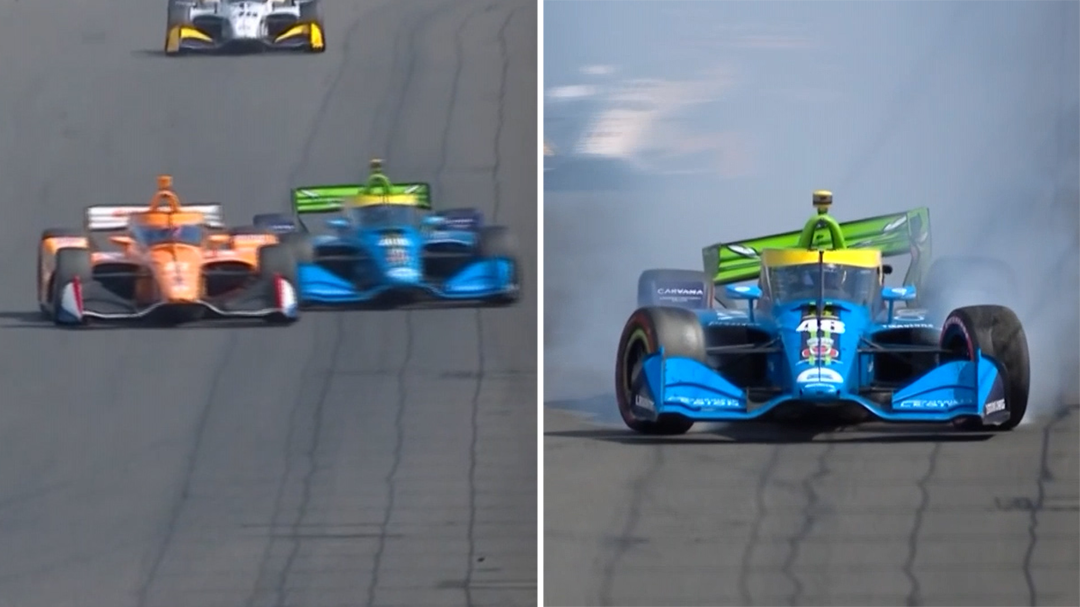 For the incident, VeeKay was handed a drive-through penalty.

McLaughlin led the field to green with 22 laps remaining. Behind him, Power got a bad getaway, opening the door for O’Ward to lunge into turn one.

All hell broke loose as the Mexican banged into the side of Power. Behind them, Newgarden and Rossi got into each other. In all of that, Dixon slid by the two Americans before showing his nose on O’Ward who blocked into turn three.

For the block, the McLaren SP was told to give third place up to Dixon and began falling into the clutches of Rahal.

That melee gave McLaughlin a free kick, leading by 1.3 seconds

On the harder compound tyre, Newgarden began ceding positions hand over fitst. He lost out to Rahal, Herta, Rossi, and Lundgaard with less than 20 laps to go.

With 16 laps remaining, Lungaard threw away eighth place as he tried to pass Rossi into the turn one chicane.

The Danish driver overshot the turn and hit one of the advertising hoardings which got stuck under his front nose cone, forcing him to pit.

In the end, McLaughlin held is own to take the chequered flag, winning by 1.1 seconds over Power. Dixon threatened to take second place off Power but in the end settled for third.

O’Ward was fourth ahead of Rahal, Herta, Rossi, Newgarden, Callum Ilott and Rosenqvist.

With just one race remaining in the 2022 season, Power leads on 523 points while Newgarden and Dixon sit on equal points in second, 20 points adrift.

With 11th, Marcus Ercisson is still in mathematical contention, albeit 39 points away from Power.

McLaughlin is the last of those in the title picture, sitting fifth and 41 points off the lead.