Swans star Tom Hickey played an enormous role as Sydney pushed past Melbourne at the MCG on Friday night to book a home preliminary final.

While the ruckman was on point shutting down the Demons’ Max Gawn and Luke Jackson and also providing a spark to his team’s attack, Hickey was also fighting a different battle away from the field.

﻿He left behind his twin baby girls in hospital while he headed to Melbourne to play in Friday night’s qualifying final win.

“I’ve had both my … ah I won’t talk about. It’s just amazing people (at the Swans),” he said, holding back tears. 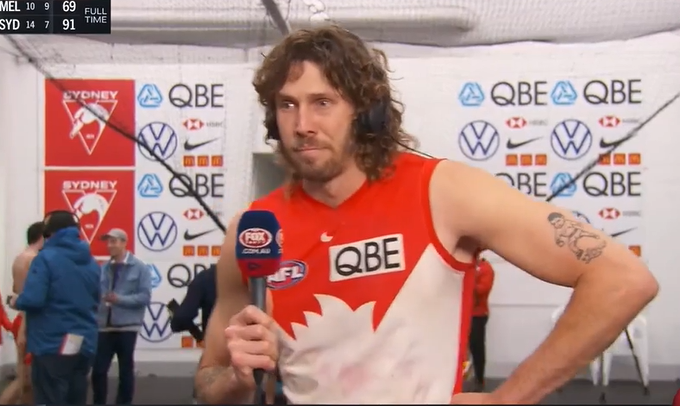 Hickey, played arguably one of his best games throughout his 12-year AFL career in what was only his fourth final with his fourth AFL club.

He spoke recently of the challenges parenthood had brought,﻿ with twins Olive and Delma arriving eight minutes apart, either side of midnight, in late October.

“It’s awesome. We were lucky to have them early in the off-season, so we had a fair bit of time to get our feet on the ground,” he said.

“It was harder earlier in the year – so hard on my wife, and hard on us – just with the lack of sleep and obviously being in Sydney and not having a heap of family support with the day-to-day stuff.

“The footy club’s been sensational through it and our friends and family have been awesome. Generally when I go away, my parents or Chloe’s parents or some friends come down and spend the night, just so Chloe’s not on her own.

“We feel like we’re coming out of the trenches now, at 10 months. They’re starting to crawl and laugh at each other and entertain each other. I think I described it as pure chaos with moments of bliss.”