The Aussie at the centre of US sport’s biggest hit

American sport’s biggest cultural phenomenon right now has an unlikely man at the centre of it – Sydney’s own Timmy Trumpet.

In front of some 42,000 people at the New York Mets’ stadium, Citi Field, Trumpet played the iconic hook to his song ‘Narco’ to signal the arrival of Mets’ pitcher Edwin Diaz.

Entrance music has long been a popular feature for the ‘closer’ in American baseball teams, the pitcher who is tasked with throwing the last inning of a game when the team is in front.

In the past, Yankees legend Mariano Rivera would stride out to Metallica’s ‘Enter Sandman’, while long-time Red Sox closer Jonathan Papelbon would arrive to Dropkick Murphys’ classic ‘I’m Shipping Up to Boston’, and Milwaukee Brewers closer Trevor Hoffman would be serenaded by AC/DC’s ‘Hells Bells’.

There’s plenty of others, although the phenomenon hadn’t been as frequently seen in the past few years. But the popularity of Diaz’s entrance has led to other teams following suit.

The Baltimore Orioles’ new closer, Felix Bautista, arrives after an ominous whistle that was popularised by the character Omar Little in ‘The Wire’, the iconic HBO show that was set in Baltimore.

But Diaz’s entrance has captivated the sporting world in recent weeks, with multiple clips going viral and racking up millions of views.

The Mets’ mascots play mock trumpets on the sidelines, and merchandise has been flying off the shelves. 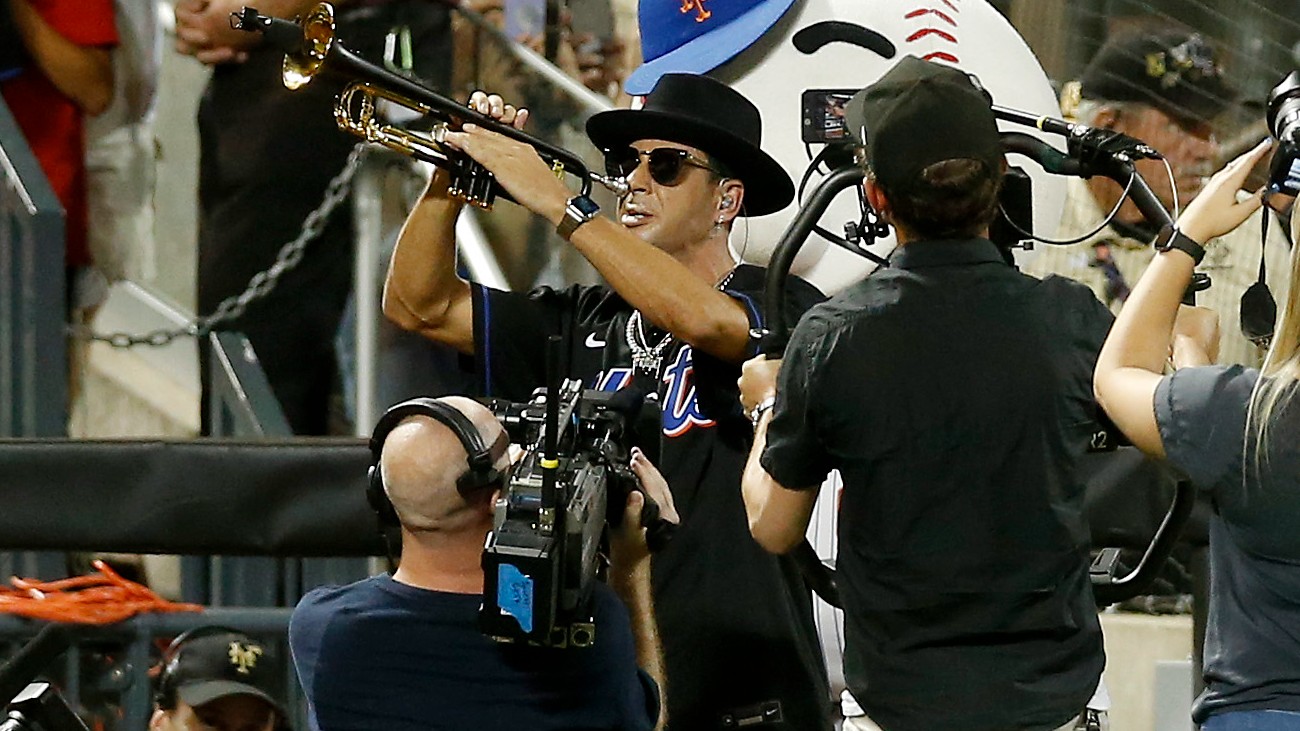 So it was only fitting that at some point, the man himself would play the iconic trumpet hook live at Citi Field, which he did on Thursday night.

Given Diaz’s role on the team, he usually only pitches late in the game when his team is winning narrowly. That meant that two days ago, Trumpet sat on the sidelines as the Dodgers led throughout.

But on Thursday, he finally got his chance as Diaz strode into the game and retired all three batters he faced, clinching a 2-1 win.

“I could feel the vibe from the fans. They were really excited.

“I think I can feel the difference because you know he was performing the trumpets live. It was really fun to watch.”

Diaz confirmed that should the Mets, who currently lead their division, make the World Series, that Trumpet would return.

“He said he would come back to play in the World Series again.”