The Tigers can barely be called an NRL team after the woeful performance they put up against the Roosters.

Some 55 missed tackles only begins to tell the story of their shameful effort.

Not a single forward could manage to run for 100 metres and their completion with the football was abysmal.

In a dark season for the club this was rock bottom – and they deserve to finish with the wooden spoon.

It’s doubtful if a second row combination in the NRL era has had the impact of Roosters duo Angus Crichton and Nat Butcher in the 72-6 slaughter of the hapless Tigers.

The pair scored six tries between them, ran for more than 300 metres, with five line breaks on top of that as the Roosters broke record after record in their SCG swansong.

As bad as the Tigers were, the Roosters’ performance would have put fear into the likes of Penrith, Melbourne and Parra.

The Roosters have strike power all over the field and if they can keep the team that smashed the Tigers on the field, they will be a real force over the next six weeks. 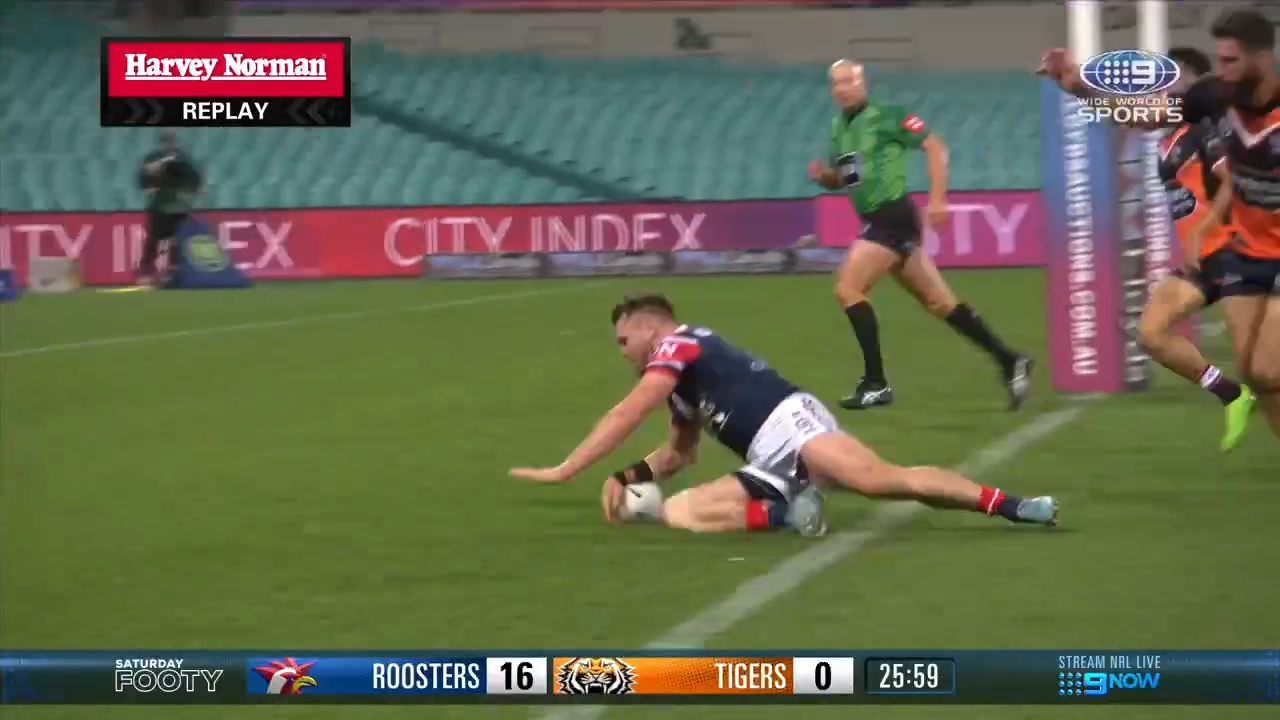 In a season of frustration for Dragons‘ fans, there were plenty of positives in yesterday’s 46-26 win over the struggling Titans.

Top of the list was Talatau Amone’s performance at five-eighth, with his recent showings securing him the number six jumper for the start of 2023.

Amone scored two impressive tries, taking his tally in the past two games to five touchdowns.

A confidence player, Amone has shown his talents while other players have struggled in recent weeks.

Another pleasing aspect of the Dragons’ win was the hat trick to winger Tautau Moga – a player who has had his share of adversity down the years.

A former Rooster, Cowboy, Bronco, Knight and Rabbitoh, 28-year-old Moga has had a string of injuries including three knee reconstructions.

But you wouldn’t have known it as Moga powered over for three tries and 192 running metres to ensure he’ll be a Dragon again in 2023. 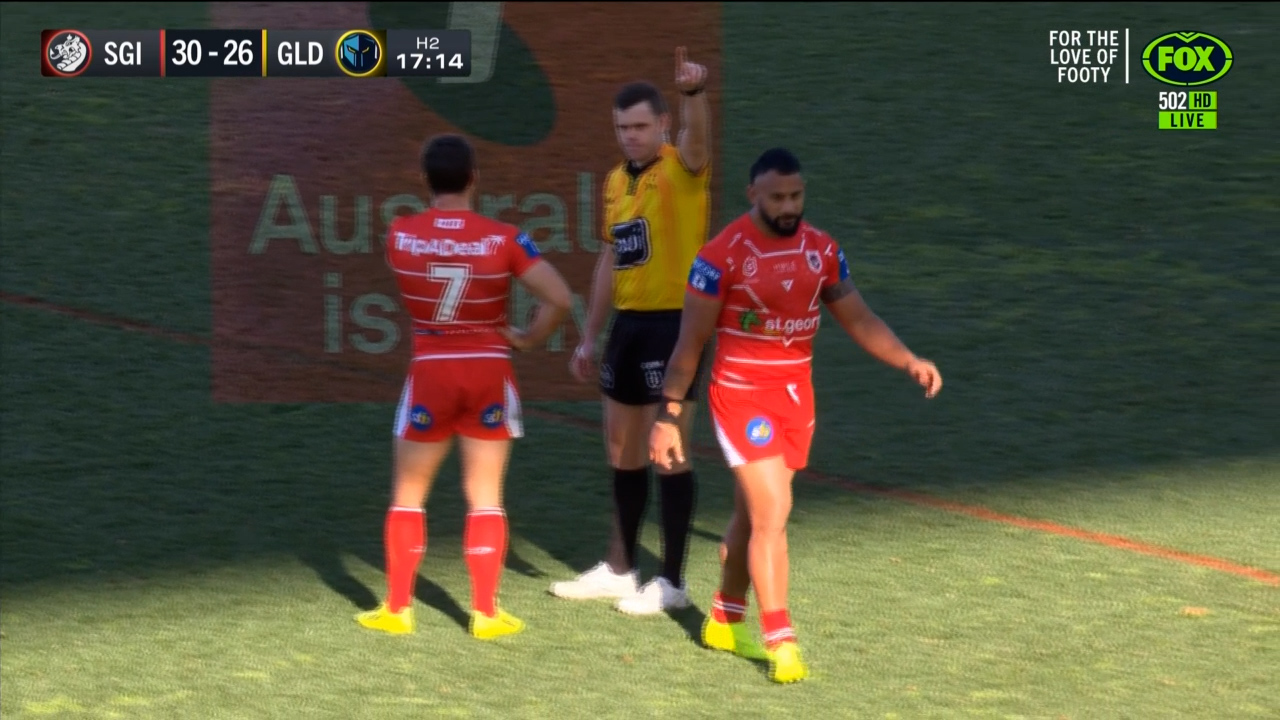 Winger Matt Ikuvalu is proving a handy signing for the Sharks – joining coach Craig Fitzgibbon in coming over from the Roosters this season.

With the Sharks boasting plenty of backline class, Ikuvalu has managed just five games for the club but has proved his worth on every occasion.

He produced his best game in Sharks colours in the 40-6 defeat of the out-of-sorts Sea Eagles last Saturday night.

The strongly-built winger probably won’t make the Sharks’ top 13 when everyone is fully fit – but is the type of player who will prove a handy fill-in when called into the side. 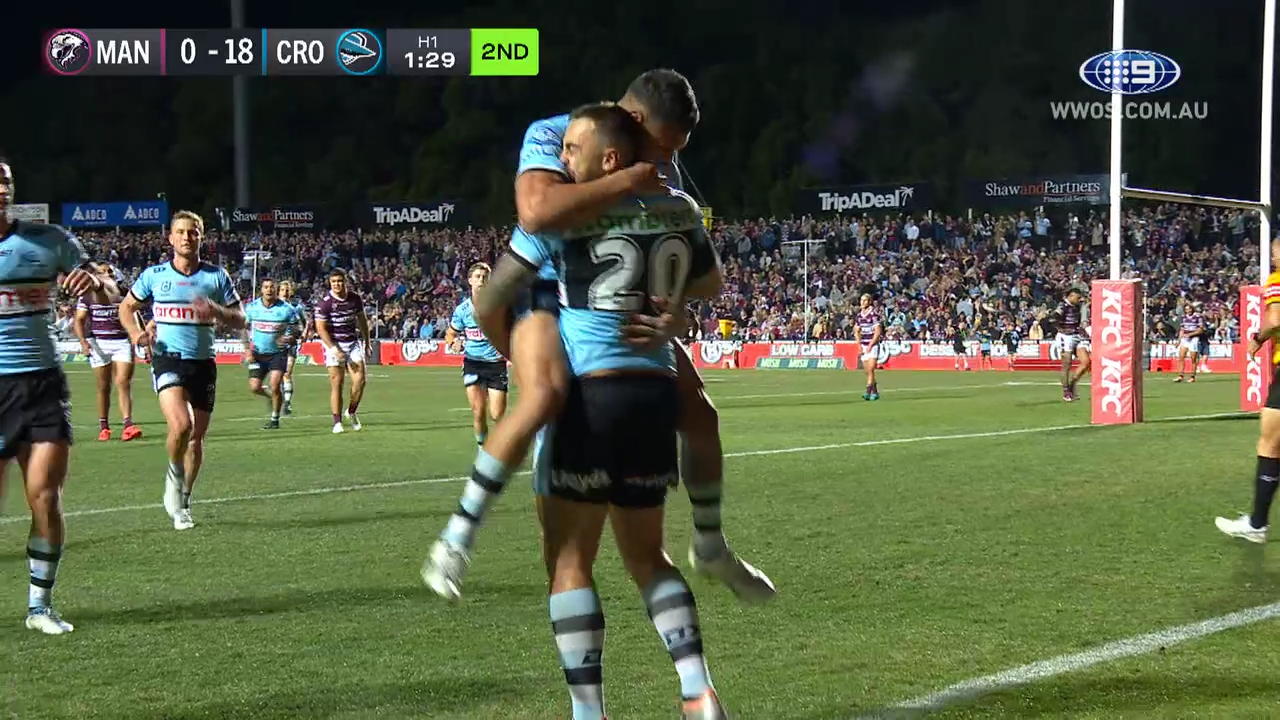 It will be halfback combinations that are likely to produce the 2022 premiers – and maybe, just maybe that gives the Eels a chance to break their decades-long drought.

With Mitchell Moses making a sparkling return from a broken finger in the 42-6 mauling of the Bulldogs and Dylan Brown in career-best form, Parra have a pairing capable of matching the best of them.

The duo toyed with the Bulldogs, who have lost their way after some fine performances under Mick Potter.

If they take this form into the finals, anything is possible. 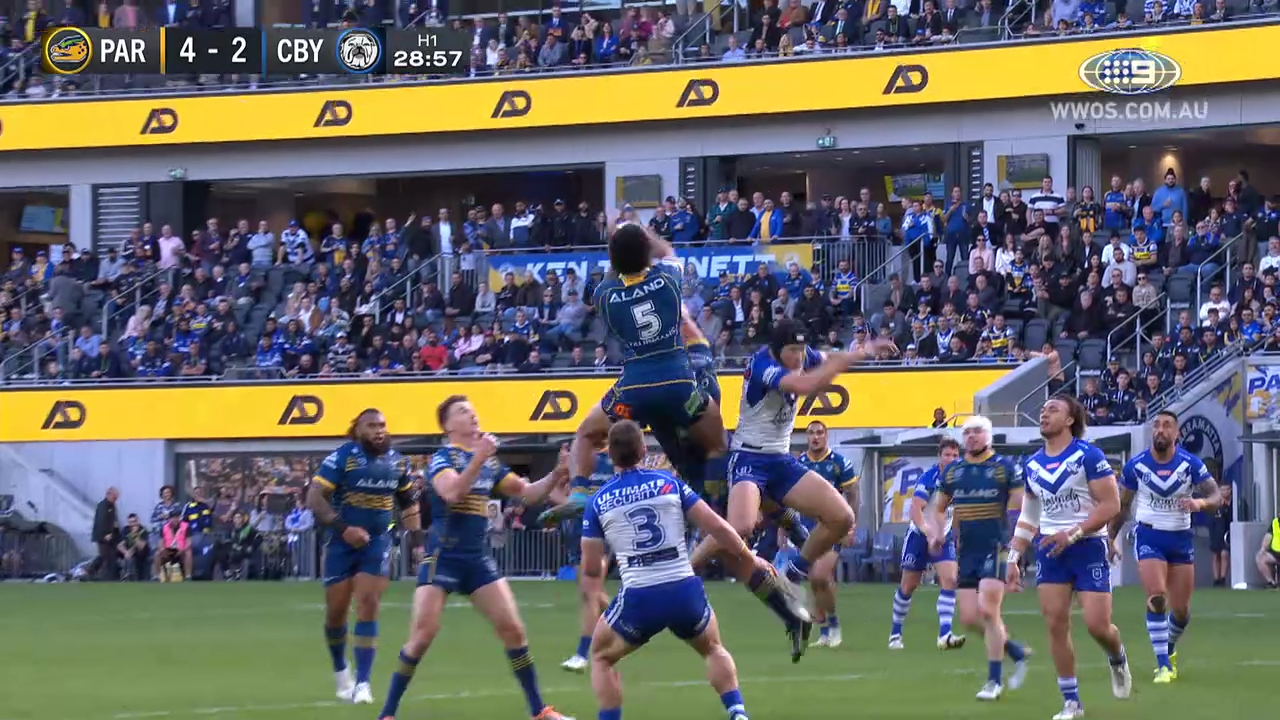 The Tigers may well finish with the wooden spoon – but I can’t help thinking they will play an influential role in who wins the 2022 premiership.

The two players they released mid-season – David Nofoaluma and Luciano Leilua – are genuine game-breakers who will have a big impact in the finals.

Nofoaluma was superb on the flank for the Storm as they demolished the Broncos while the enigmatic Leilua was red hot as the Cowboys thumped the Warriors 48-4.

A real handful with his ability to break tackles out wide and offload, Leilua ran for 137 metres and scored a try.

He’s growing in confidence in every outing under Todd Payten, who has him running at little men who simply can’t contain him. 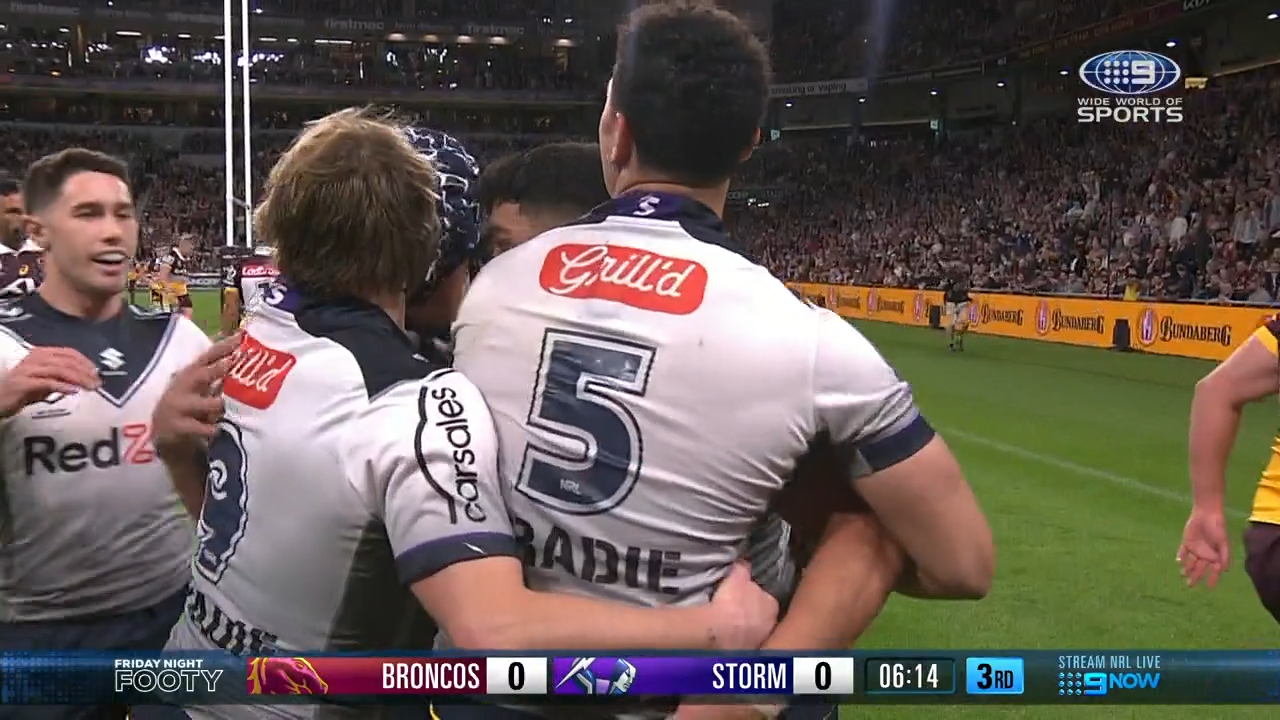 Nelson Asofa-Solomona is a scary proposition to tackle at the best of times – and he absolutely terrorised the Broncos with a career high 193 running metres on Friday night.

The big man is usually renowned for short, devastating bursts but took his game up a gear against the tackle-shy Broncos.

With Harry Grant giving him time and space from dummy half, the towering middle forward gave one of the finest running display up the middle seen for years and is shaping as an x-factor in the finals.

Fit and firing, there are few more dynamic players in the game and his ability to steamroll defenders and offload will make the Storm pack a worry for any team hoping to take the title. 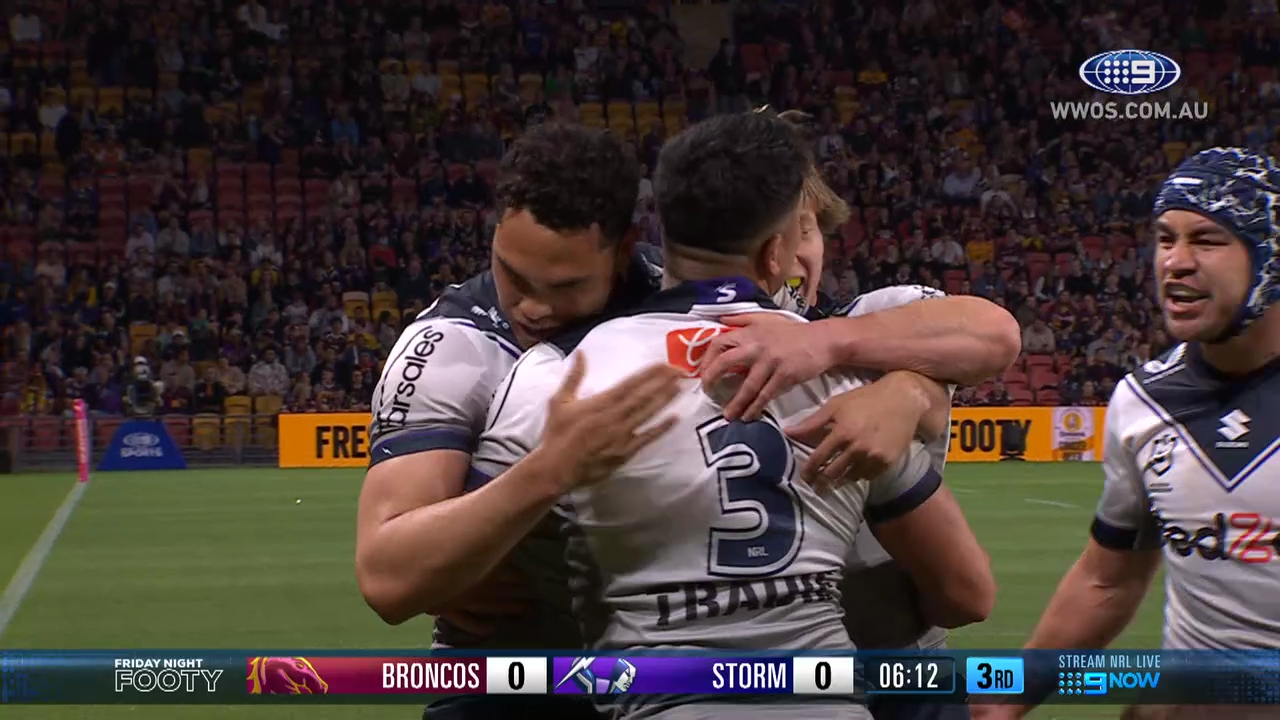 Can Brisbane cling onto eighth spot?

You had to feel for Ezra Mam on Friday night at Suncorp.

Storm coach Craig Bellamy targetted the slightly-built Broncos five-eighth and the result was a calamity.

Mam missed a staggering 10 tackles in the Storm’s record 60-12 win and while he has been a breath of fresh air in attack since coming into the Broncos’ line-up, his place in the team could now be in doubt.

Mam wasn’t the only offender as the Storm ran in 10 tries and the tackling bags will doubtless be out at Red Hill this week as the Broncos try to salvage their season. 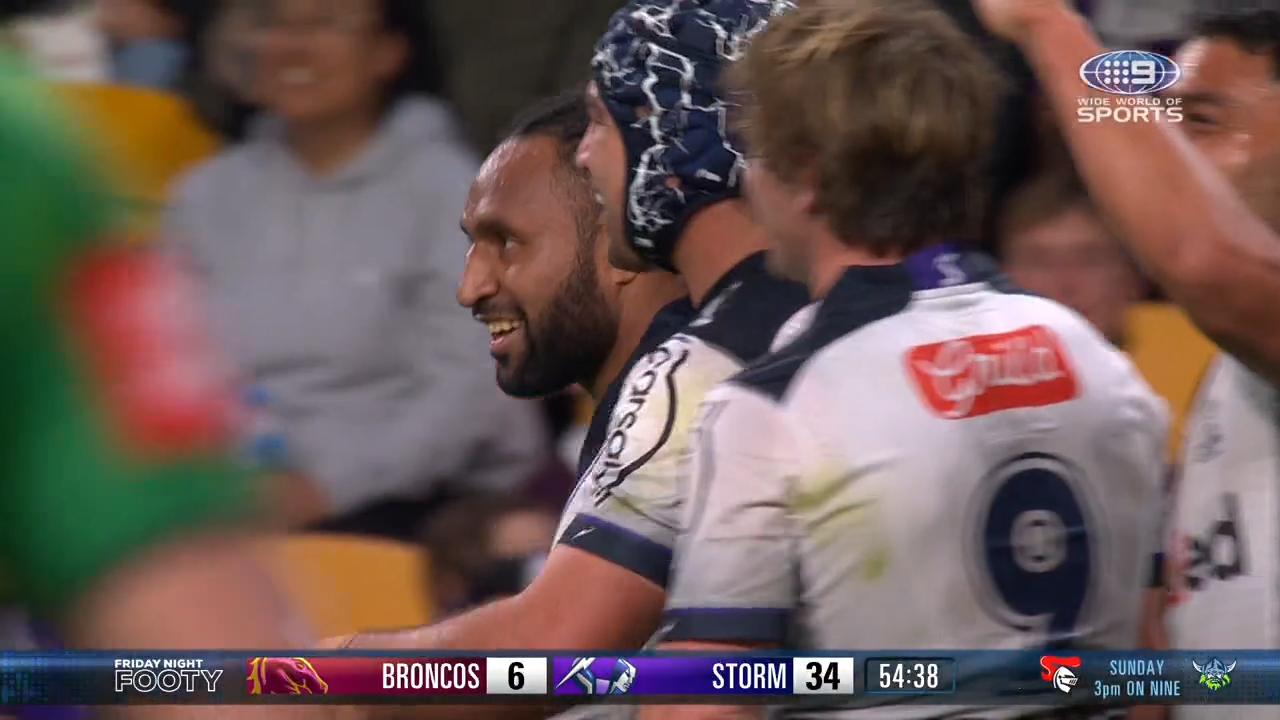 In a beaten side, Johnston scored two tries and has now crossed in seven consecutive games for the first time in his career.

Irvine’s record looked safe a few months ago, but with 19 tries in his last 10 games, Johnston is a man on a mission. 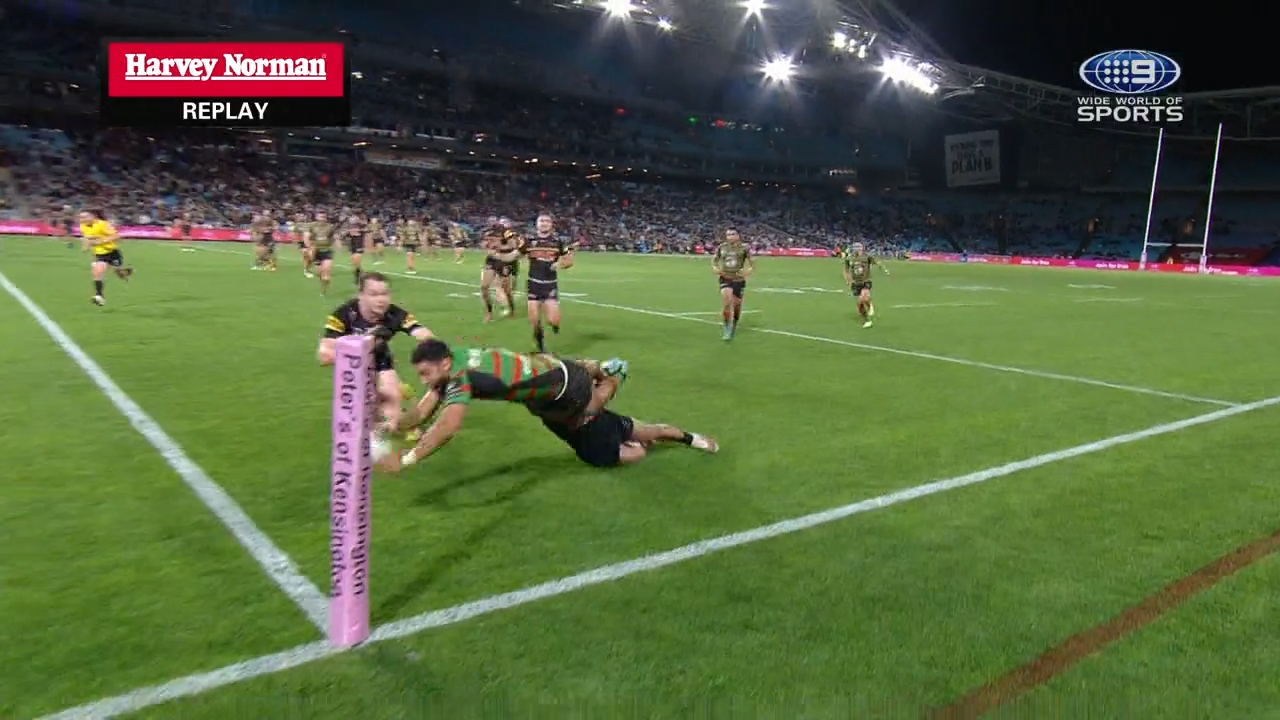 There are plenty of worthy contenders for the Dally M Captain of the year award – and Isaah Yeo pushed his case with a real skipper’s knock in the Panthers’ 26-22 win over Souths in Thursday night’s grand final replay.

The Panthers went into the game looking vulnerable without their big guns Cleary and Luai and it’s in game’s like this that the class players step up.

And step up Yeo did, distributing well, running for 165 metres and making 45 tackles.

It was a class performance from a bloke who seems to improve season by season and without his cool leadership, Souths may well have won an epic clash.

LATER TATER: Brian Stelter Fights Back Tears as He Ends His Last Broadcast After CNN Canceled Him (VIDEO)