Scott McLaughlin has recorded his sixth IndyCar podium finish this year, falling just shy of victory in an enthralling close to the Bommarito Automotive Group 500.

Having led just prior to the red flag, McLaughlin lost out to Newgarden on the restart and dropped to third on the final lap after a sterling drive by rookie David Malkuas to second.

With the win, Newgarden has vaulted himself into title contention and now sits just three points in arrears of Team Penske stablemate Will Power who finished sixth.

Newgarden commended his teammate McLaughlin for their late-race squabble that ultimately determined the outcome of the race. 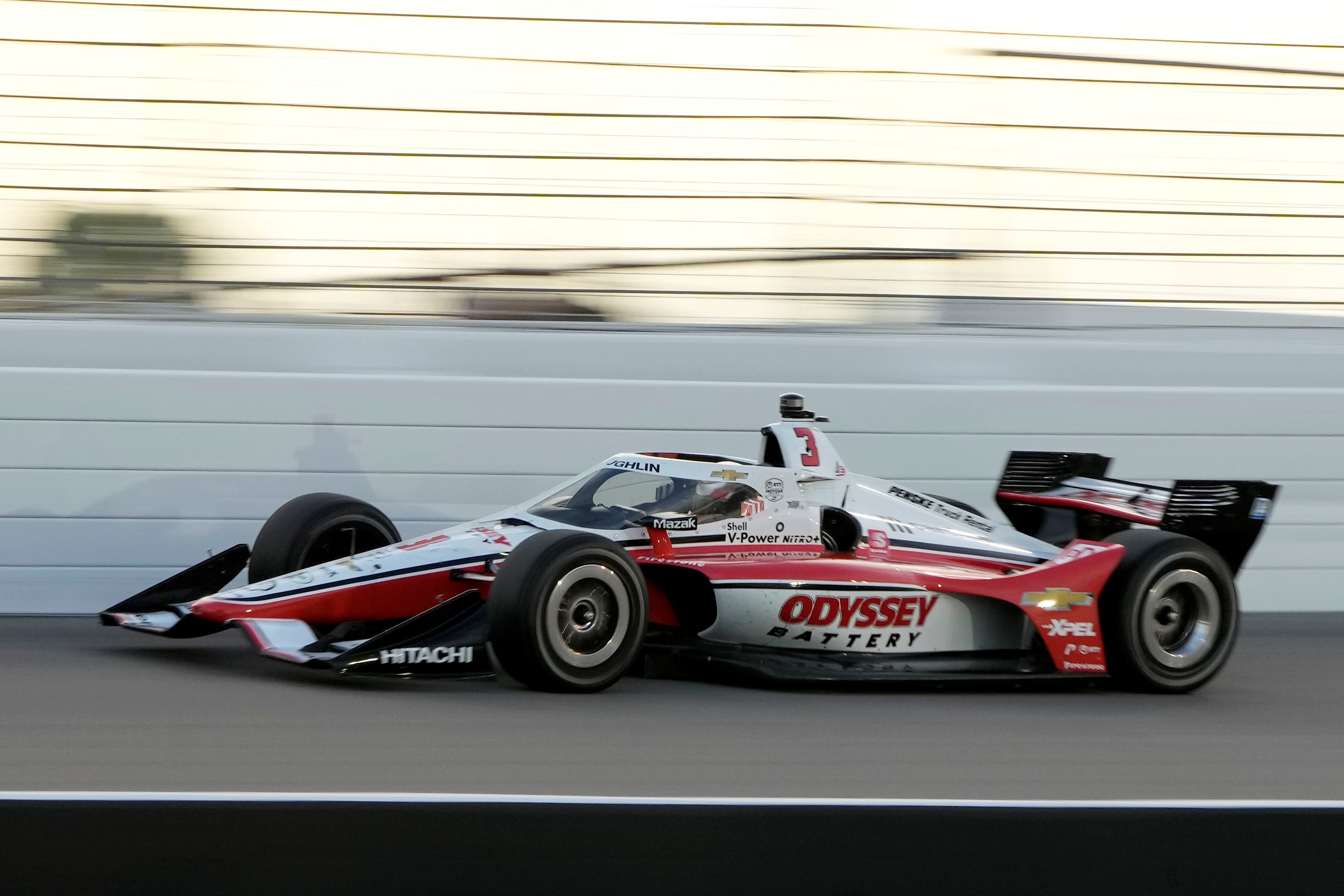 “I’m so happy we were able to finish this race,” said Newgarden after the 260-lapper.

“Scott McLaughlin, he wanted to win too. I love that about us, we have a good relationship. Obviously, each of us want to win, but he drove me super fair there at the end and we had a good fight. It’s a big night for everyone at Team Penske.”

From the head of the field, it was Power who led Chip Ganassi Racing’s Marcus Ericsson into turn one while McLaughlin nabbed third off of Newgarden.

It was a smooth start to proceedings for Power, who held a lead just shy of one second over Ericsson before coming upon traffic.

Come lap 40, Power finally made a move on Jimmie Johnson of Chip Ganassi Racing to put him a lap down.

The first round of pit stops began in earnest around lap 50. Power pitted on lap 59 followed by McLaughlin, early charger Pato O’Ward, and Newgarden while Ericsson came in a lap later.

Once the field had cycled through, Power led McLaughlin who leapfrogged Ericsson. O’Ward was fourth, Newgarden fifth, and Scott Dixon sixth.

O’Ward showed early pace, passing Ericsson before a nervous moment on lap 91 when he got to the back of McLaughlin.

The McLaren SP driver showed his nose to the preceding Team Penske car into the penultimate turn. However, McLaughlin came across the bow of O’Ward, taking the downforce off the Mexican’s front wing, who slid up the track and lost a place to Newgarden.

With that, it became a Team Penske one-two-three with Power leading McLaughlin and Newgarden.

Following the second round of pit stops, O’Ward came upon McLaughlin. On the second time of asking, it was McLaughlin who got up high and into the dirty part of the track to lose a ton of time.

After a 144-lap streak, the yellow flag flew for Rahal Letterman Lanigan Racing’s Jack Harvey who hit the wall.

Surprisingly, only a handful of the front-runners opted to pit. That included McLaughlin out of fourth and Newgarden out of fifth.

Once the field had cleansed, it was Power who led O’Ward, Ericsson, Dixon, and Alex Palou. McLaughlin was the first of those on fresh tyres in sixth followed by Newgarden, Takuma Sato, Graham Rahal, and Colton Herta.

On the lap 158 restart, Power led proceedings but was quickly usurped by O’Ward with a bold pass around the outside.

Further behind, McLaughlin went four-wide with Dixon, Palou, and the lapped car of Kyle Kirkwood – moving from sixth to fourth in just a few hundred metres.

In a matter of seconds, Newgarden breezed by McLaughlin and then Ericsson with two bold passes around the outside on lap 163.

Newgarden continued the charge, passing Power on lap 164 and then O’Ward a lap later to take the lead. In less than 10 laps, the two-time champion had gone from seventh to first. 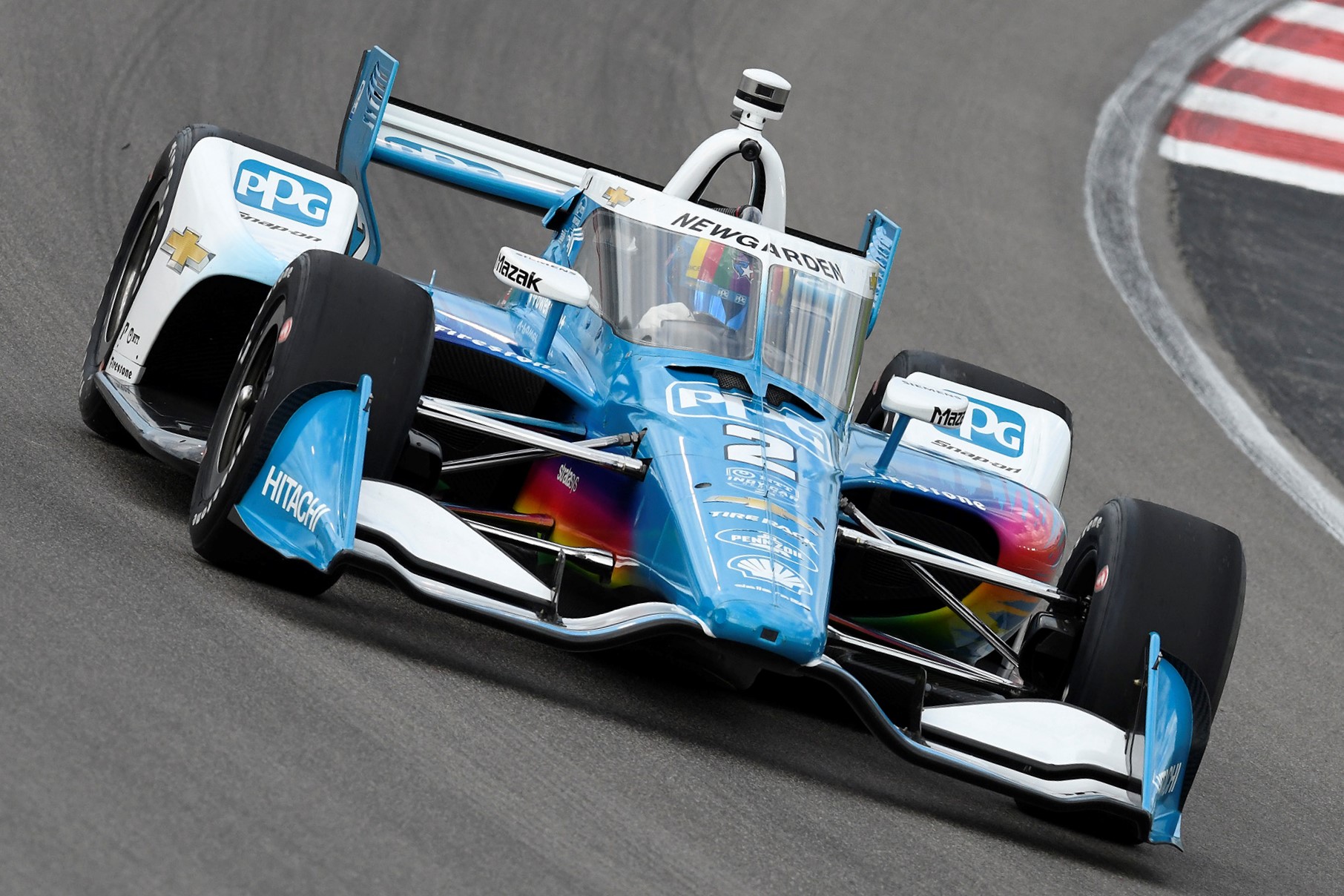 Newgarden quickly stretched his legs out to a 2.5-second lead while McLaughlin eased his way by Power on lap 176 and then O’Ward on lap 177.

The final round of pit stops began as lap 200 approached. Having stretched his advantage over McLaughlin out to nearly eight seconds, Newgarden soon had that slashed by traffic to just 1.5 seconds.

McLaughlin pitted on lap 206 with clear air ahead of him while Newgarden pitted with Rahal Letterman Lannigan Racing’s Christian Lundgaard in front of him.

That would prove to be the difference, as McLaughlin got the undercut and took the effective lead of the race once the likes of Sato, David Malukas, Graham Rahal, and Herta pitted.

The timing of McLaughlin taking the lead couldn’t have been much better as the yellow flag flew for a second time on lap 214 for precipitation.

The race was quickly red-flagged and the field was brought to pit lane as rain saturated the circuit. What followed was a two-hour stoppage before the rain abated and the track was dried.

As night fell, McLaughlin led the field to green for the long-awaited restart with 36 laps to go.

However, his lead was short-lived as Newgarden got to the inside at the final corner and swept through.

McLaughlin kept Newgarden honest in the final stanza, but soon had a hard-charging Malukas to worry about.

The Dale Coyne Racing driver had risen through the field on the restart, passing Power and O’Ward to put himself in contention for the win.

Several laps were spent looking at McLaughlin’s rear wing before going to the outside on the last lap at the first turn to secure second place.

Newgarden ultimately claimed the win with Malukas second, Power third and O’Ward and Sato the last of the top five runners.

With sixth, Power kept his series lead, although that stands at just a three-point advantage over Newgarden.

Power still leads the series on 482 points but has Newgarden hot on his heels, just three points in arrears.

Ericsson finished seventh while Dixon was eighth. Palou and Rahal completed the top 10.

The IndyCar Series has a weekend off before returning at Portland International Raceway for the penultimate round of the season on September 5.