Nick Kyrgios’ evolution was again on full display in Montreal, demolishing fellow Aussie Alex De Minaur in straight sets in another ominous sign for his rivals ahead of the US Open.

The 6-2 6-3 victory was his 15th in his last 16 matches, and sent Kyrgios into the tournament’s quarter-finals, while also pushing his live ranking to 27, all but securing a seeding for the year’s last grand slam at Flushing Meadows.

Kyrgios’ serve was again far too dominant to handle and virtually unplayable for de Minaur, with the star continuing his rich vein of form, which saw him go into the match winning 94 of his 95 service games.

READ MORE: Why Serena’s legacy will never be topped

He broke his countryman after being gifted two break point opportunities in the opening game and then consolidated the break to get off to a perfect start.

Kyrgios continued to dismantle de Minaur’s serve, breaking him again before pummelling him with a range of big serves to race to a 4-0 lead. 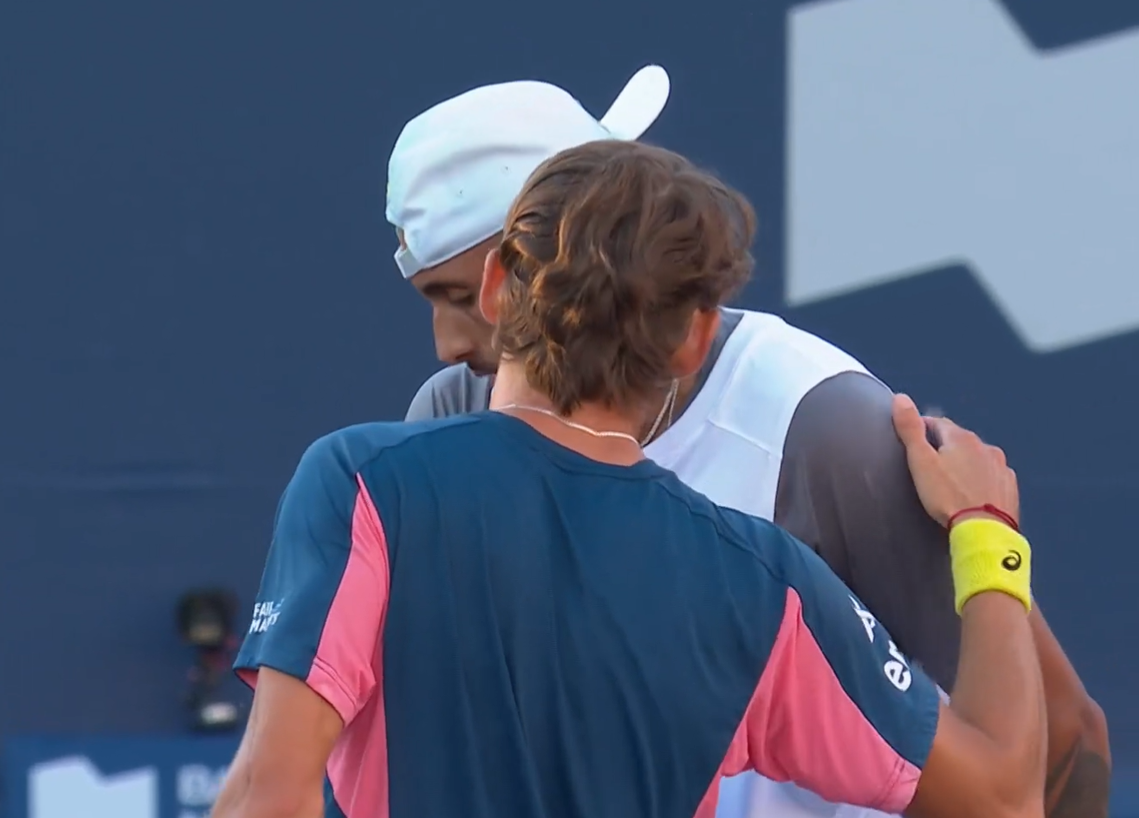 Commentators were in disbelief. “Ridiculous” and “almost as flawless as you can get” were some of the superlatives being thrown around as they watched in awe at the Aussie’s clinical display, with his groundstrokes matching the impact of his serve to leave de Minaur with no answers in 17 of the first 21 points.

De Minaur finally managed to hold serve late in the set but Kyrgios put his foot down again, bamboozling his opponent with sheer speed off the racquet to take the first set in 23 minutes.

The second set started much like the first with Kyrgios breaking again only for de Minaur to put up some resistance in the following game.

Up until that point, Kyrgios had been quiet and going about his business, but as soon as de Minaur broke his serve and levelled it at 1-1, the chatter towards his box began, with the unpredictable star accusing them of not supporting him enough.

He nearly went off again the next game when a ball fell from de Minaur’s pocket onto the court during a rally he was dominating, forcing the umpire to intervene and stop the point, ruling that it should be replayed. But Kyrgios stayed composed and got things back on track soon after, breaking back and then holding serve from love-30 down to lead 3-1.

De Minaur showed grit to stay competitive in the second set but a failed drop shot in the sixth game gifted Kyrgios a double break and a chance to serve out the match. However, he faltered again, leaving him upset at his box.

That moment seemed to spur him on in the next game, converting one of three match points against de Minaur’s serve to seal it in just over an hour, racking up 22 winners in the 6-2 6-3 win.

“After yesterday’s big high of playing Daniil, the crowd was amazing. Today was mentally hard for me to play Alex we’re such good friends and he’s been having such a good career so far and carrying the Australian flag for so long, it was tough it’s not easy to play a friend like that,” Kyrgios said.

Even though he berated them throughout the match, the Aussie paid tribute to his team for giving him the belief throughout his recent purple patch.

“My girlfriend, my physio, my agent we’ve gone through ups and downs but these days are starting to blend into one another,” Kyrgios said.

“I’m just playing the game, eat, sleep and play, it’s tiring but that’s the sport. I am missing home a little bit.

“I’ve got my mum and my dad who I haven’t seen in three months. I’m missing home but at the same time I want a couple of more tournaments before I go home.”

Kyrgios will now play eighth seed Hubert Hurkacz in the next round. Hurkacz won their only previous meeting at Halle in June earlier this year.

If he can beat Hurkacz, he’ll soar up the rankings to No.21.