A well-timed pit stop and a stroke of luck propelled the Chip Ganassi Racing driver to the head of the field late in proceedings.

The six-time IndyCar winner held off a similarly strong comeback drive by McLaughlin, who had led the Nashville race early only to be hindered by a butchered pit stop. 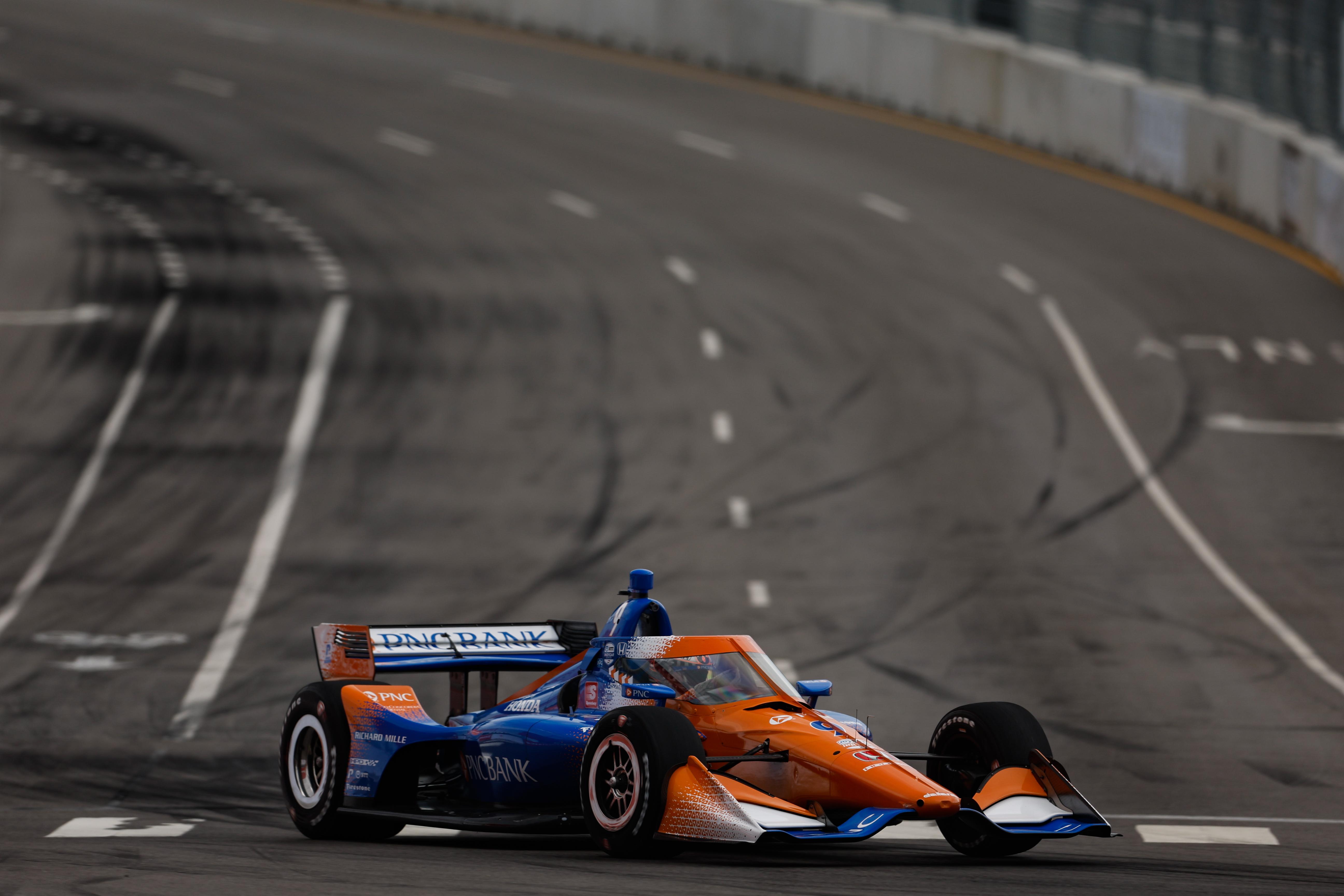 With the win, Dixon moves to outright second on the all-time winners’ list and propelled himself to second in the standings just six points behind Team Penske’s Will Power.

“I think the tough thing all weekend is I knew the PNC Bank No.9 was super fast, we proved that in the warm-up, we just didn’t have many consecutive laps,” said Dixon.

“Kudos to the team. We had a big crash that took half the floor off the car. We had to take four turns of front wing out. We had no grip.

“I think we did 45 or 50 laps on that last set of tyres. The last stop, we didn’t even take tyres. Huge credit to Firestone as well.”

It was a sterling defensive drive by Dixon, who held off McLaughlin at the death to win by just 0.1 seconds.

“We were worried about him because I knew he’d take chances, he kind of has to with the standings at the moment,” said Dixon of McLaughlin.

“He was super fast as well. He had fresh tyres too, so I was a bit of a sitting duck. I think if there was a lap or two more it would have been really tough to do.

“Congrats to him on a great weekend. Hopefully that was good for us for points.” 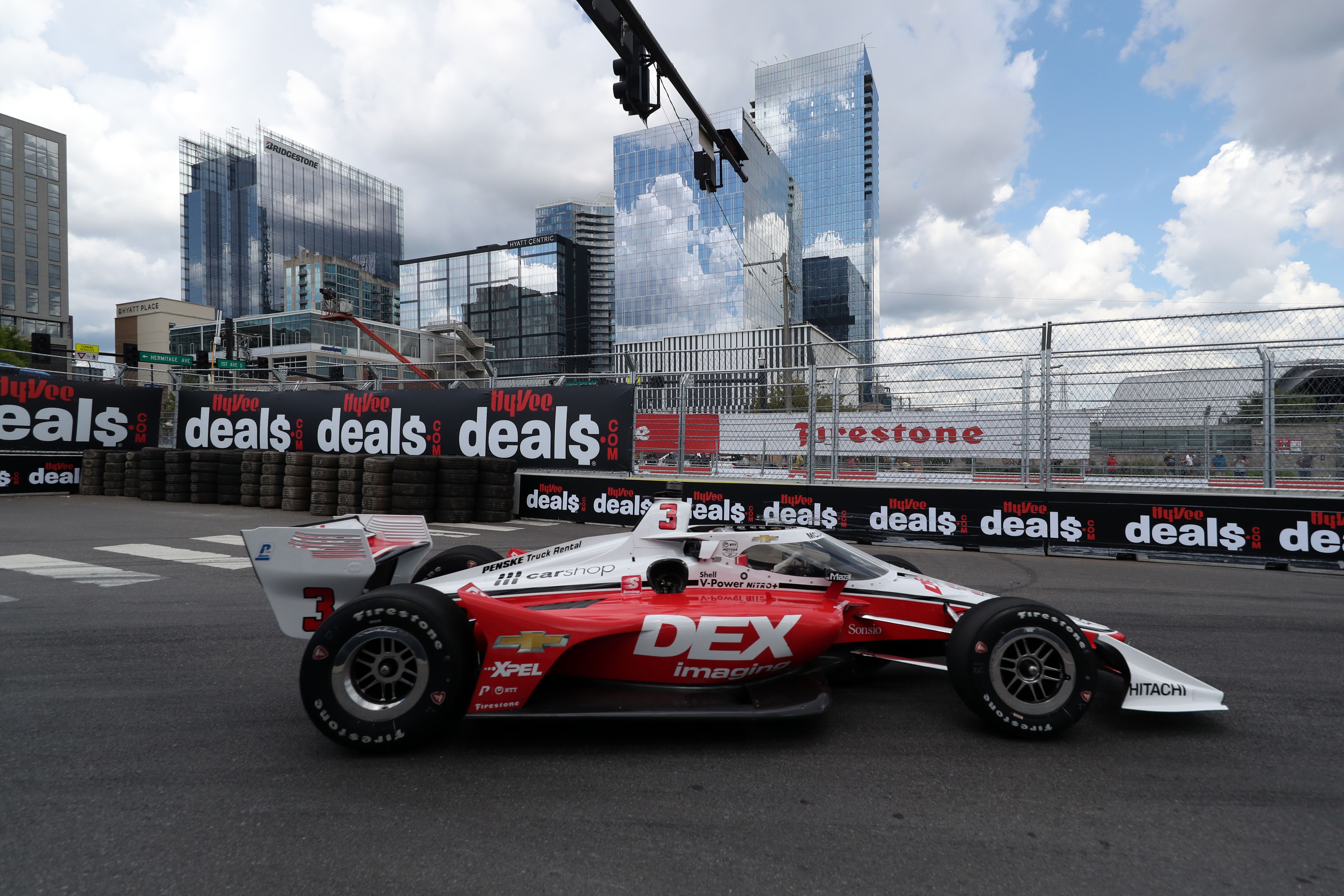 From the point, McLaughlin led Grosjean through the tight left-handed turn one and immediately set about creating a gap.

After a clean start to proceedings, pre-event favourite Colton Herta made wheel-to-wheel contact with Dalton Kellett of AJ Foyt Racing at the tight turn seven.

With nowhere to go, Herta clouted the wall and plucked his front wing off. He was forced to the pits and duly went down a lap.

It was another cruel blow for Andretti Autosport, which quickly found itself with two cars a lap down to the leader.

Racing resumed on lap 12 with McLaughlin at the head of the field. Eight laps later and green flag pit stops got underway in earnest. 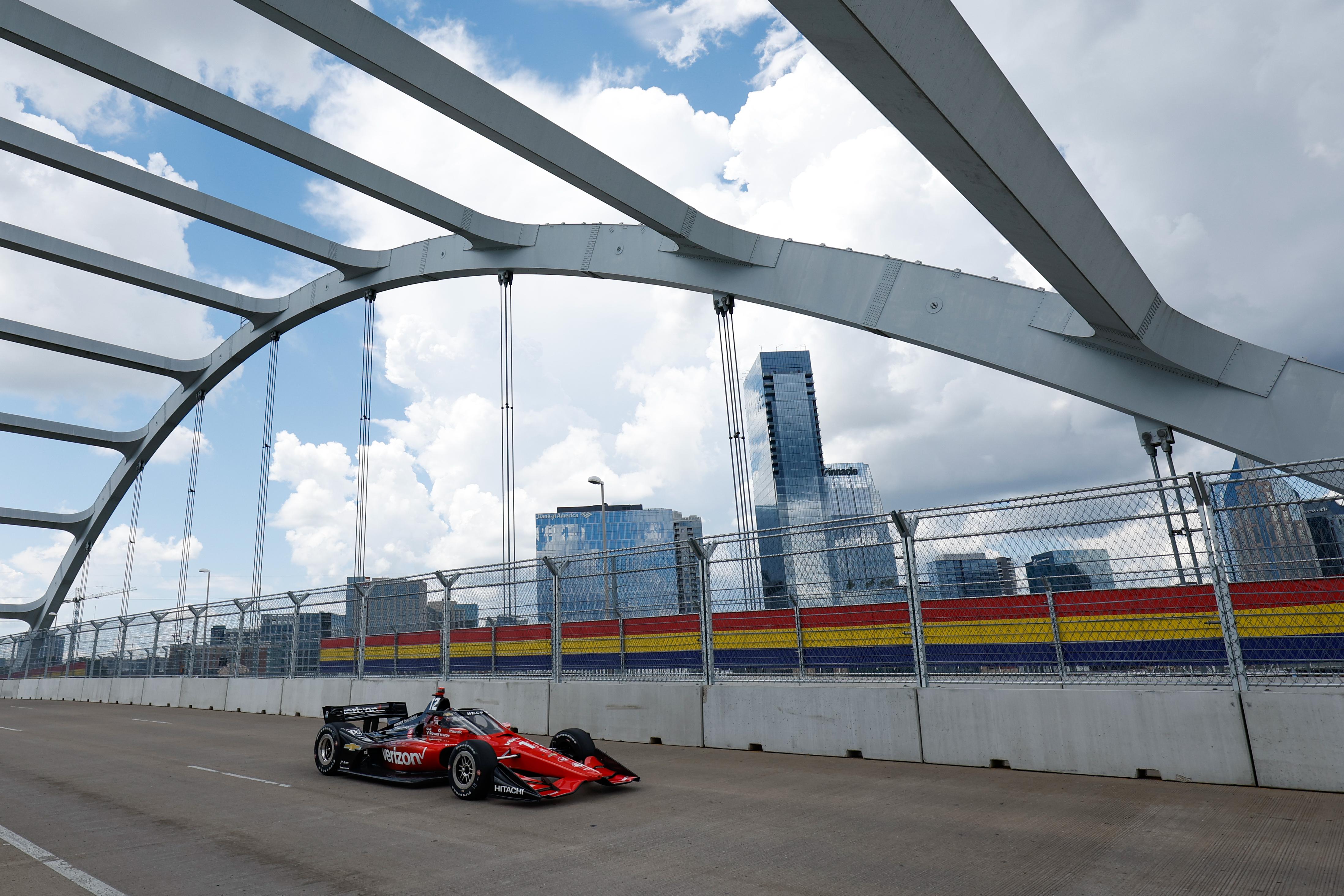 In the midst of that, Meyer Shank Racing’s Helio Castroneves spun on his own out of turn six to bring out the second caution of the day.

Prior to the safety car intervention, a handful of drivers had pitted and benefitted as the leaders came to the lane under yellow.

McLaughlin was the first of those who pitted under yellow ahead of Grosjean, Team Penske’s Will Power, Rahal Letterman Lanigan Racing’s Christian Lundgaard, and Pato O’Ward of McLaren SP.

It was a short-lived green flag run on lap 26 when Rahal Letterman Lanigan Racing’s Graham Rahal drilled the back of O’Ward. That damaged Rahal’s front wing while O’Ward lost drive.

Further back, Rahal’s teammate Jack Harvey came to a halt as he tried to avoid the melee ahead of him. That checked up Juncos Hollinger Racing driver Callum Ilott and Dixon, leaving Kellett to rear-end the Kiwi.

Dixon suffered damage to the floor in the crash, pitting under yellow and falling to the back of the pack.

Ilott subsequently stalled, as did Kellet who copped a hit from the only female in the field, Simona De Silvestro of Paretta Autosport.

Such was the damage to Rahal’s car that as he limped back to the pit lane, the wing got stuck under his front wheels and speared him into the outside wall over the bridge.

O’Ward, Kellet, and De Silvestro retired while Rahal returned to the race later on.

After the incident, O’Ward took to social media to vent his frustrations in which is labelled the race’s location “Crashville”.

It was another chaotic restart on lap 33 when Ilott and Rossi interlocked wheels, sending the pair into the turn one run-off. Moments later, Dale Coyne Racing’s Takuma Sato and Andretti Autosport rookie Devlin DeFrancesco collided and darted into the outside wall.

On the lap 41 restart, Pagenaud sent smoke signals as he locked up and nearly centre punched the rear of Palou.

Not wasting any time, McLaughlin dive-bombed Malukas into turn three and copped a hit from the rookie, though the Kiwi ultimately prevailed.

Come lap 43, McLaughlin pulled off another bold pass, this time picking off Pagenaud.

As lap 50 ticked over, the final green flag pit stops began in earnest. Shortly thereafter, the caution was called after Rahal nose-dived the wall and was followed in by Rinus VeeKay.

That gave Scott Dixon a massive free kick, having just pitted prior to the yellow. He cycled to the lead of the race with Power and Lundgaard second and third respectively.

For McLaughlin, a horror pit stop some three seconds slower than his rival dropped him to 15th.

With the pit stops completed, it was Newgarden who led, albeit, with another stop to come. Dixon was second and Lundgaard third. Power was fourth while Havery was fifth. Palou was sixth as the first of those to pit under yellow followed by Malukas, Herta, Grosjean, and Kirkwood.

McLaughlin wasted little time on the restart, climbing five places on the first green flag lap with a series of brave passes.

With 17 laps to go, the two rookies Kirkwood and Malukas came together to bring out yet another caution.

Under the safety car, race leader Newgarden pitted with 14 laps to go to hand Dixon the lead over Lundgaard.

On the restart, McLaughlin took care of Herta for fourth and then passed Palou for third, who was carrying front wing damage.

Former points leader Marcus Ericsson had been the quiet achiever of the day, consistently hanging around the top 10, only to lose drive momentarily and stop on track.

With eight laps to go, Johnson lost control of his car coming off the bridge and slapped the wall hard. That wrecked his car and once more the safety car was brought out.

Four laps shy of the finish, Newgarden got into the side of Grosjean on the restart. With nowhere to go, the Frenchman slammed into the wall and brought proceedings to a halt.

With the finish in sight, the red flag was drawn. After a brief intermission, that set up a one-and-a-half-lap dash to the chequered flag.

McLaughlin ducked and dived to try find a way through, but Dixon ultimately crossed the line first.

Palou bookended the podium for Chip Ganassi Racing while Rossi and Herta capped off incredible recovery drives to fourth and fifth respectively.

Newgarden, Felix Rosenqvist, Lundgaard, Harvey, and Pagenaud completed the top 10 with Power on the fringe in 11th.

EPIC! Beto O’Rourke Chased Away from Texas Venue by Throngs of Abbott Supporters as Kid Rock Plays in the Background (VIDEO)