Roosters star Victor Radley is know as “the inflictor” but on Thursday night it was he who looked like he had copped a beating.

The enforcer had blood pouring out of his head from a bad laceration, sustained in a nasty head clash with Broncos hooker Jake Turpin in the first half of the Roosters’ 34-16 win.

Radley dropped straight to the turf after the collision and held his head in his hands, and when he removed it a heavy stream of blood could be seen running out onto the SCG grass.

He left the field with a trainer, and Nine’s sideline reporter Danika Mason later revealed the Chooks doctor put six stitches in the wound – opting not to use the staple gun – and told Radley he would need more repair work done after the game.

But those plans were rushed forward when Radley went back on the field, immediately put a shot on Corey Oates, and had the gash opened up again. 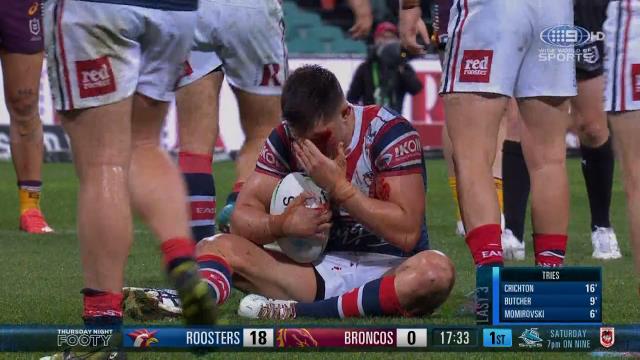 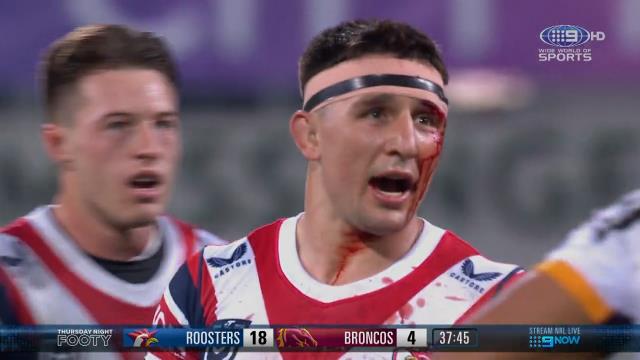 As blood once again poured down his face referee Todd Smith stopped play and told Radley he had to leave the field again to have it cleaned up.

The Roosters star was clearly unhappy he was being asked to miss more game time.

“What, (go off) for the half?” Radley quizzed, but Smith was having none of it.

It wasn’t long before he was back on the field, head taped heavily.

No one can ever question the toughness of rugby league players.