Two things have left me scratching my head over the past week in rugby league.

The NRL has made it clear it’ll do whatever it takes to protect the head and neck of players, with league bosses making the point in the weekend newspapers that they’re “winning the war against concussion” with a reduction in head-knocks of 40 per cent this season.

Why then are dangerous acts of foul play going unpunished by the match review committee when there are players being fined and/or even escaping sanction for elbowing others in the head like Jared Waerea-Hargreaves and Nelson Asofa-Solomona?

The Roosters enforcer copped a $3000 fine for driving his elbow into a defenceless Manly debutant Zac Fulton who was on the ground at the time, and Asofa-Solomona wasn’t even charged after dropping his forearm onto the head of Warriors hooker Wayde Egan, who is facing a trip to the dentist to repair some busted teeth. He’s lucky it wasn’t worse.

The last time I checked, that’s dangerous contact with the head and under the NRL rules should be punished heavily, so what is the match review committee looking at? 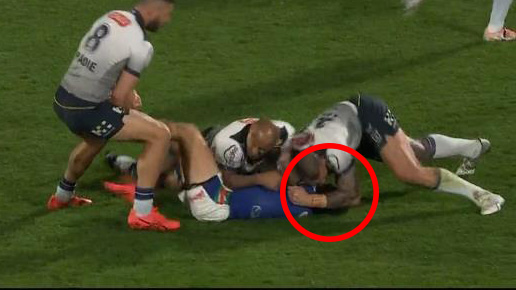 To make matters worse, South Sydney forward Tom Burgess copped a one match ban for a good old fashioned coat hanger to the head of Ronaldo Mulitalo that warranted a send off, but again the MRC hit him with a feather.

Adding to the confusion around foul-play is the two-match suspension imposed by the NRL judiciary last week on Cronulla forward Dale Finucane for an accidental head clash with Stephen Crichton, who suffered a lacerated ear.

Finucane said after the hearing that the decision “will set a dangerous precedent”, but the match review committee has instead ignored at least two other incidents which I consider much worse than the tackle involving the Sharks veteran.

I don’t want to sound frivolous, but why wasn’t Lindsay Collins charged for the collision with Andrew Davey on Thursday night? Is it because the Roosters player came off second best and was knocked out before hitting the ground? We’ve all been crying out for consistency from the MRC, but you’d have more luck finding a needle in a haystack. 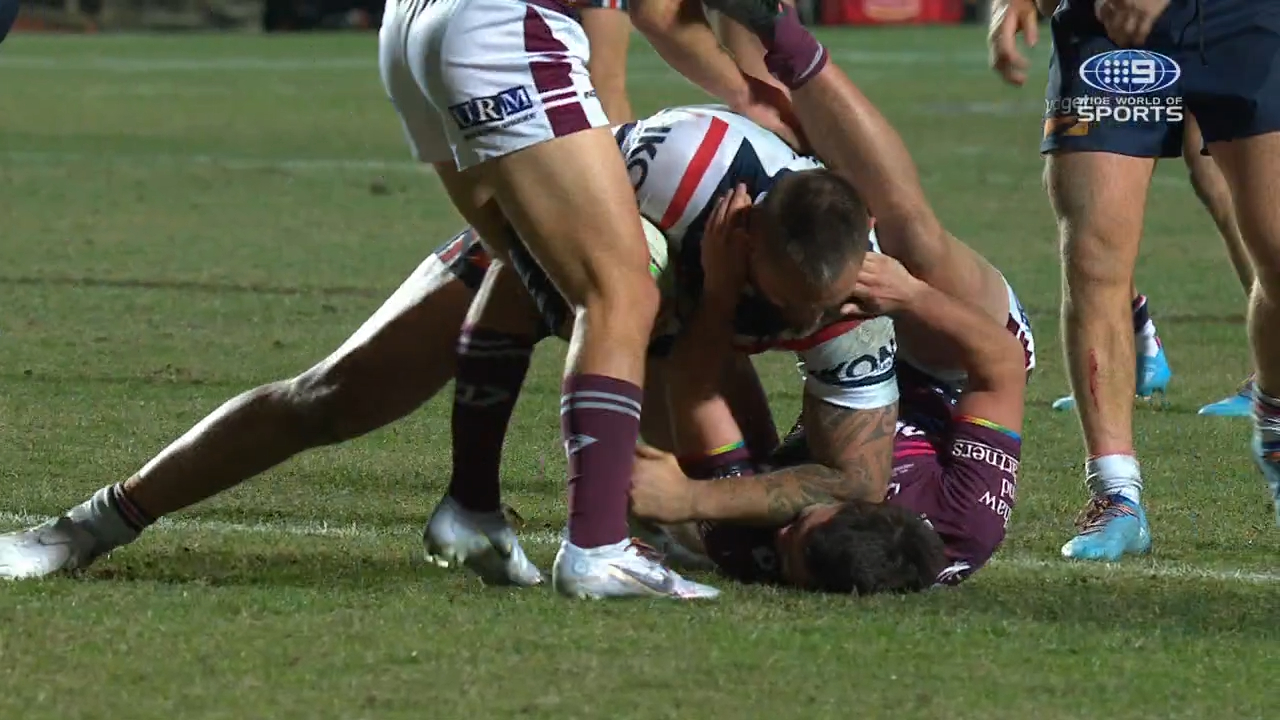 The other issue that’s left me puzzled is a difficult one. It’s the pride jersey at Manly. We refer to the game as being inclusive with NRL boss Andrew Abdo and ARLC chairman Peter V’landys declaring “we’re a game for everyone”, yet we’ve spent the last seven days ostracising a group of Sea Eagles players for their religious beliefs.

For the record, I support the pride jersey and while I disagree with the likes of Josh Aloiai, Jason Saab and Josh Schuster who refused to wear the rainbow colours on Thursday night against the Roosters, are they not entitled to their religious beliefs?

There is a huge Pasifika presence in the NRL with around 50 per cent of the players who are of Pacific origin or with Pacific heritage and that’s something we should be extremely proud of. It’s what makes us not only an inclusive game, but a multicultural game as well.

The Sea Eagles handled the pride jersey appallingly and hijacked the build-up to a special weekend in which we celebrated the Harvey Norman Women in League Round. 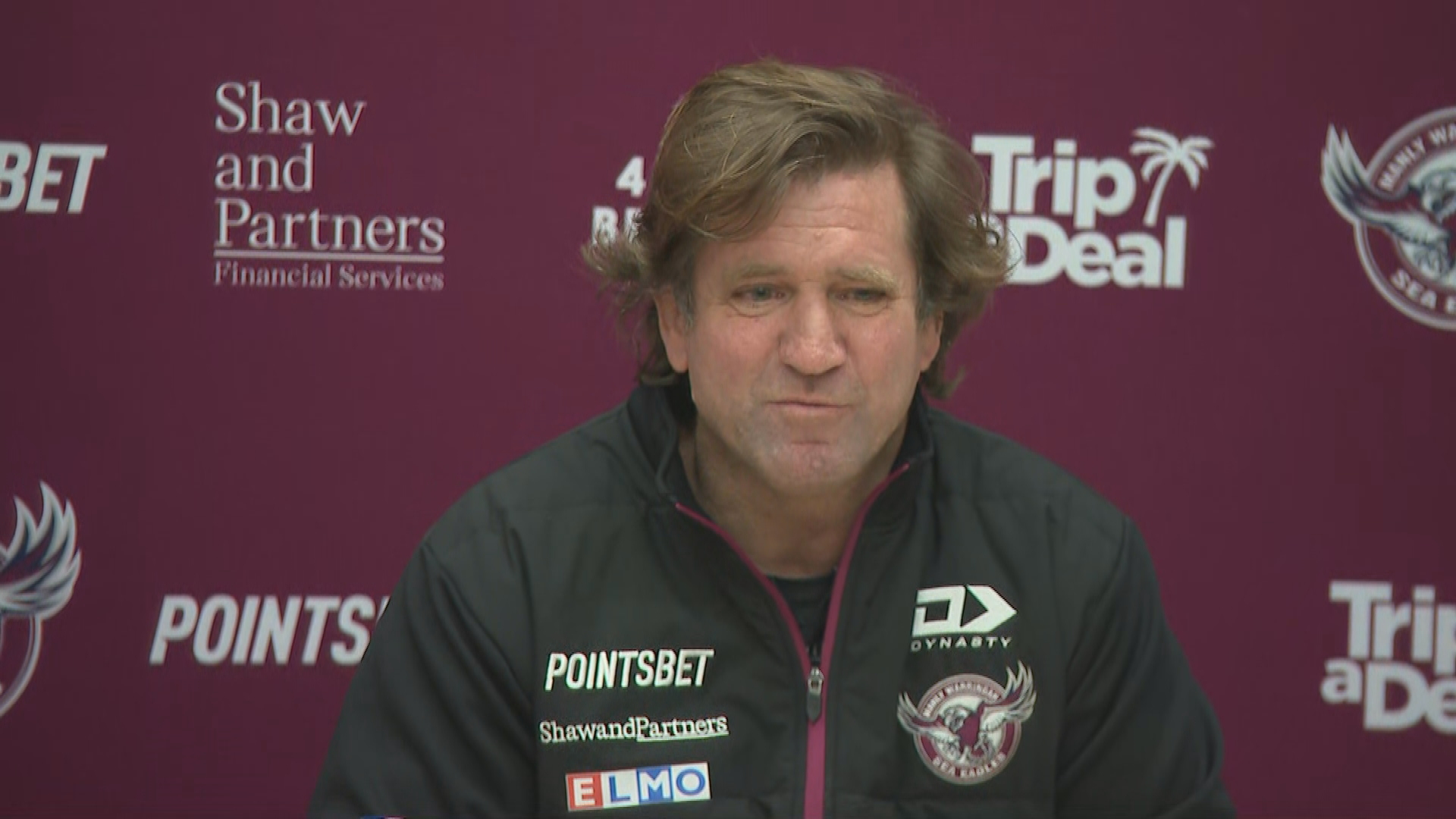 The club officials who failed to consult the players were nowhere to be seen, it was instead left up to Des Hasler to handle the firestorm of criticism at one of the most impressive press conferences I’ve ever seen from an NRL head coach.

Des spoke passionately, emotionally and with empathy as he navigated his way through a minefield of questions from the waiting media who would usually turn up in the same numbers to speak to the prime minister.

His opening remarks pointed to the cause of the controversy and that was “sadly, the execution of what was intended to be an extremely important initiative was poor.”

Chairman Scott Penn returned from the United States to meet with the players and said on Thursday night in an interview with Danny Weidler on Nine News that they were open to wearing the pride jersey in the future.

“That’s the message they were very clear on, let’s work together” said Penn.

The seven Manly players have since rejected that suggestion from the Sea Eagles chairman, insisting they’ll never soften their stance when it comes to religion, so this is an issue that’s not going away for the club or the National Rugby League.

Peter V’landys is refusing to rule out the possibility of the league introducing a pride round as early as next season, insisting inclusivity and different opinions have to be equally respected as we “don’t live in Russia.”

If that’s the case, I’m questioning why the NRL would head down the path of a pride round which has the potential to alienate the 50 per cent of Pasifika players in the game who may or may not support it because of their religious beliefs.

Again, I disagree with their religious beliefs and I find them difficult to accept in 2022, but if we’re not “living in Russia”, how can we then force the Polynesian players to support something they don’t believe in?

Sexual preference and inclusivity shouldn’t be such a complex issue, especially in sport. At the same time, when you look at the players, coaches and officials who make up the National Rugby League, it’s very much a complex issue in need of more discussion.