The family of F1 legend Michael Schumacher is reportedly planning to shift its life to Spain from Switzerland.

Schumacher’s wife Corinna has reportedly bought a plot of land near the town of Port Andratx in Majorca, and the F1 icon has already reportedly visited their new island villa by helicopter, according to German magazine Die Bunte.

It’s also claimed Corinna, 53, purchased a 54,000 square metre plot of land which will be used to set up a horse ranch, costing $4.1 million.

Schumacher’s wife won the European Championship in western-style horse riding in 2010, and his daughter is also an avid horse rider. It states Schumacher’s wife has “big plans on the sunny island” and wants to make sure he has the “best medical care”.

The land is reportedly near the $47 million mansion the driver’s devoted spouse reportedly bought from Real Madrid president Florentino Perez in 2017.

It was reported last year that Corinna was selling the family’s $11.1 million mansion on Lake Geneva in Switzerland.

The family initially denied they were going to set up a new life in Spain but the reports persisted, with neighbours telling media they saw them at the property in 2019. 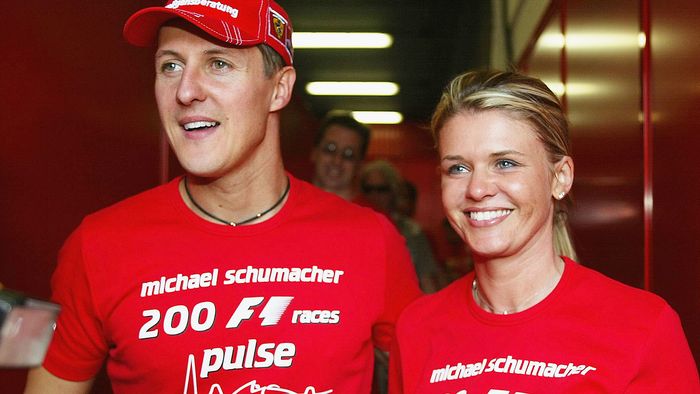 Schumacher’s health remains shrouded in mystery after a near fatal ski accident in December 2013.

He suffered a traumatic brain injury which left him in a medically induced coma.

The seven time F1 champion has not been seen since with his condition held with extreme confidentiality.