The Tour de France Femmes was marred by a huge crash which left around 30 riders grounded, with some injured, midway through the race.

The momentous crash split the peloton with 45km remaining of the 176km stage five from Bar-le-Duc, the longest ever stage of a women’s race in the modern era, and resulted in Movistar rider Emma Norsgaard leaving the race in an ambulance. She’s now abandoned the tour.

SD Worx duo Lotte Kopecky and Chantal van den Broek-Blaak were also caught up in the incident, with the latter needing to have her arm bandaged.

It’s understood a touch of wheels sparked the huge crash and it took almost three minutes for the main group to get going again. 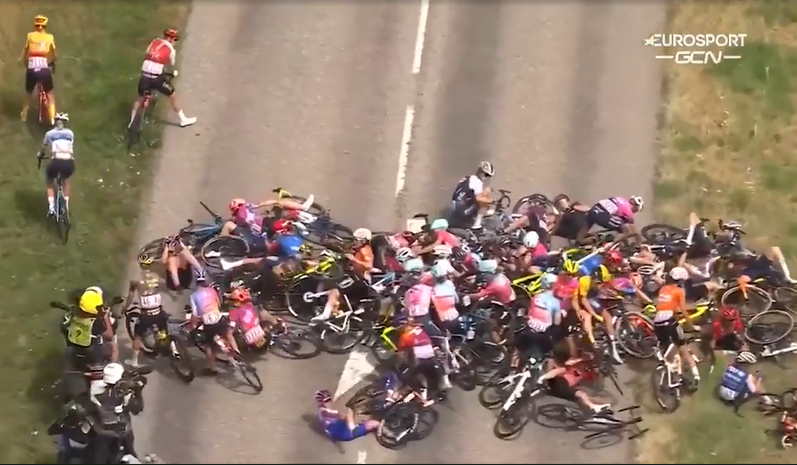 Wiebes out-sprinted world champion Elisa Balsamo and race leader Marianne Vos to add to her victory in the opening stage on the Champs-Elysees.

It’s the first time since 1989 that a women’s edition of the Tour de France is being held. Tour de France organiser Amaury Sport Organization (ASO) previously organised La Course, a one-day race held in Paris coinciding with the men’s Tour.

The first stage started from the Eiffel Tower and ended on the iconic avenue, just hours before the conclusion of the men’s race. The eight-stage race aims to become a permanent fixture on the women’s world tour cycling calendar.

A Tour stage race took place from 1984 to 1989, running parallel with the men’s edition, before later being shortened. Various other versions have been tried but they were usually underfunded.

Trans Am contenders wiped out in spectacular clash