With seven weeks to go in the NRL season, 11 teams are still in the frame to play finals football – three will miss out, while anyone currently as low as seventh on the ladder is still dreaming of a top four finish.

Here’s a look at each team’s run home.

Tier 1: Give them the Shield now

An impressively-navigated Origin period saw them come through unscathed, and assuming either of the teams directly below them wins every game, Ivan Cleary’s men could afford to lose four of their final seven games and still top the ladder. 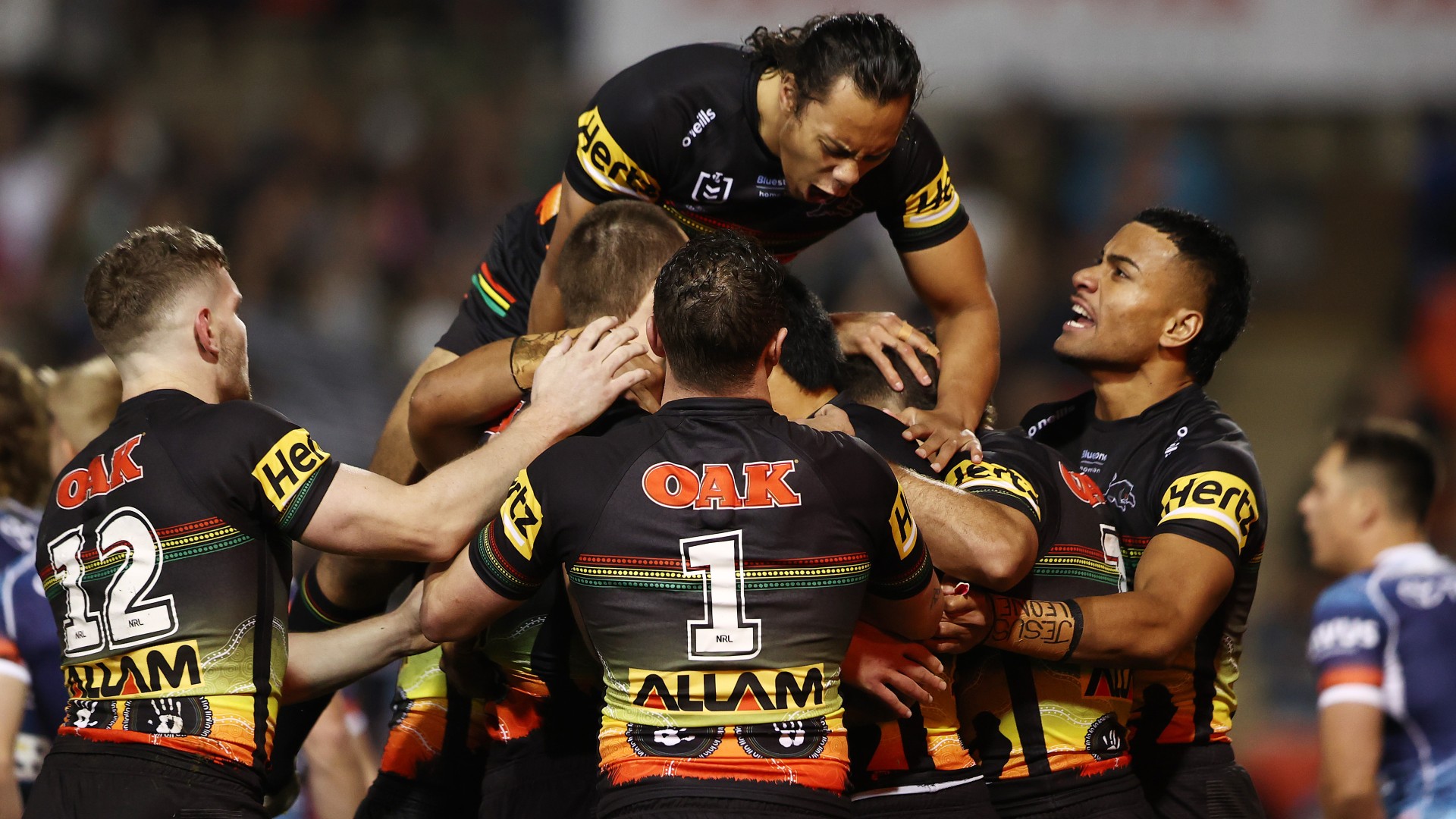 The Penrith squad could suffer nine separate misfortunes to nine different players, although that might not be enough to stop them regardless.

Even if Isaah Yeo gets hypnotised into thinking he’s a chicken, Brian To’o falls into the Springfield Mystery Spot and Dylan Edwards is kicked off the team for not shaving his sideburns, a minor premiership beckons.

One of the true success stories of the year, the Cowboys were a popular pick for the wooden spoon after a lukewarm 2021 campaign – but a combination of a stellar pre-season, great injury luck and a peeling back of last years’ much-maligned rules have put them in a position to succeed.

If you’d said “Tom Dearden and Chad Townsend are a top five halves combination in the NRL” at any point before about June 2022, you would likely have been sent for a HIA. But with those two, alongside livewire Scott Drinkwater, a skillful backline and a fearsome forward pack, everything is coming together in Townsville.

A kind next few weeks of the draw should be enough to have them locked into a top four spot regardless of their fortunes in their last couple of matches.

Cronulla are a strange team – sometimes you watch them in full flight, a relentless wave of light blue fury – Siosifa Talakai skittling defenders like a human bowling ball, flying wingers scoring athletic tries and a forward pack that on their day, can match it with anyone.

But for huge chunks of games, they struggle to co-exist, barely able to get out of each other’s way. Regardless, it’s been a great season so far – although detractors would be quick to point out their soft draw, which doesn’t really get a whole lot harder after the next two matches. 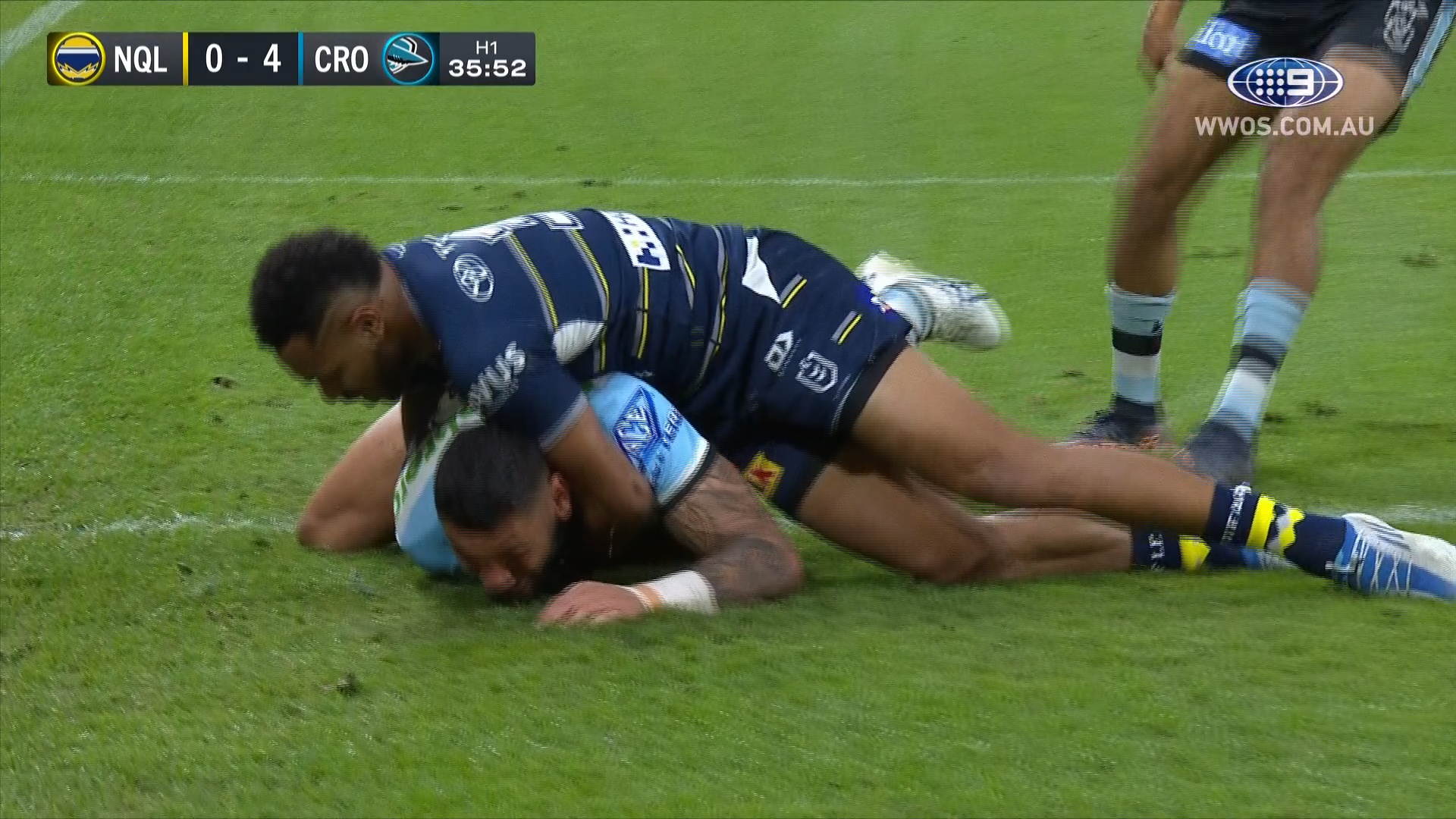 The draw gods smiled on the Shire in the off-season, getting to play each of the current bottom seven twice apiece.

The six teams they only play once? The Panthers (1st), Cowboys (2nd), Broncos (5th), Eels (6th), Rabbitohs (7th) and Roosters (9th). On top of that, they’re fresh off wins over vastly-depleted North Queensland and Melbourne sides due to Origin commitments.

Of course, nobody at the start of the year would have expected the Broncos and Cowboys to be among those teams you want to avoid, and it’s just one of the quirks of the system.

The next fortnight will be a solid test, and even winning one of two games against last year’s grand finalists will put them in the box seat for a top four finish.

Tier 3: The battle for fourth

The Storm have always prided themselves on their depth – much like NFL heavyweights the New England Patriots, the mantra has always been ‘next man up’, even when losing players like Greg Inglis and Cooper Cronk.

But their current injury crisis is testing even Craig Bellamy’s coaching brilliance, Ryan Papenhuyzen’s injury the latest in a long line of ailments in 2022. 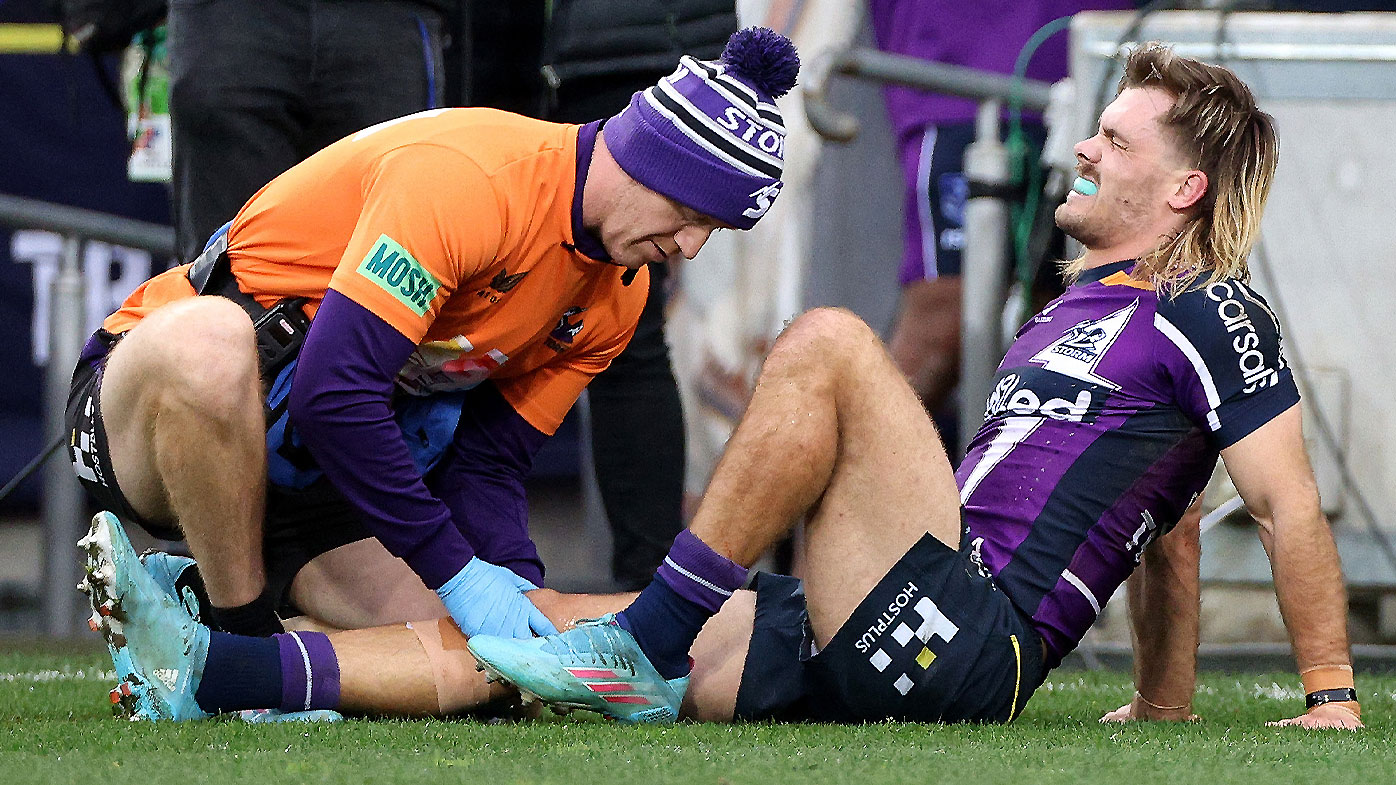 The draw isn’t exactly kind to them, either. Save for the Warriors and Titans, every other game they have left is against a team with hopes of going deep into September. Melbourne have rarely faced tough times in their history, but this might finally be the year where they take a step backwards.

The Kevolution is in full swing, and with Reece Walsh coming home next year, things are only going to keep getting better for Broncos fans.

Adam Reynolds has completely transformed the shape of their attack, while plenty of young guns have made a massive step up this season – after a lean few years, they’re suddenly a force once again.

Brisbane’s top four hopes will largely come down to two games against Parramatta, the second of which comes a week after they welcome the Storm to Suncorp Stadium, in what is looming as a massive two-game home stand.

Their Jekyll and Hyde season has been something to behold – with wins over the Storm and Panthers coupled nicely with losses to the Tigers and Bulldogs. 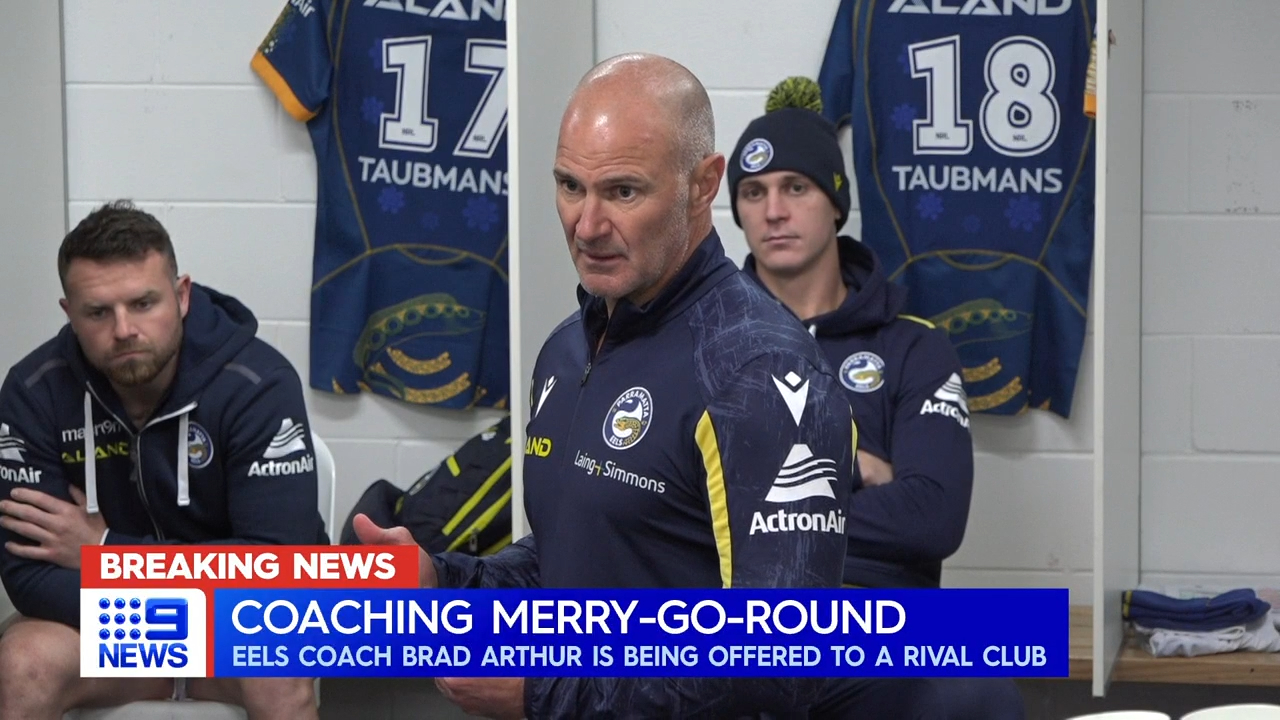 As mentioned above, two games against the Broncos could go a long way to determining who sneaks into the top four, and there’s also a chance that their final round clash with Melbourne may have a second chance in the finals on the line.

Alternatively, there’s a world where the Eels get swept by Brisbane and lose to Penrith, Souths and Melbourne to miss the finals.

A month ago, Souths were belted by the Dragons going into their bye week and things looked gloomy at Redfern – but through Latrell Mitchell, all things are possible.

Their enigmatic fullback has returned from a hamstring injury and in the three games since, they’ve rattled off a hat trick of victories and scored 106 points in the process. 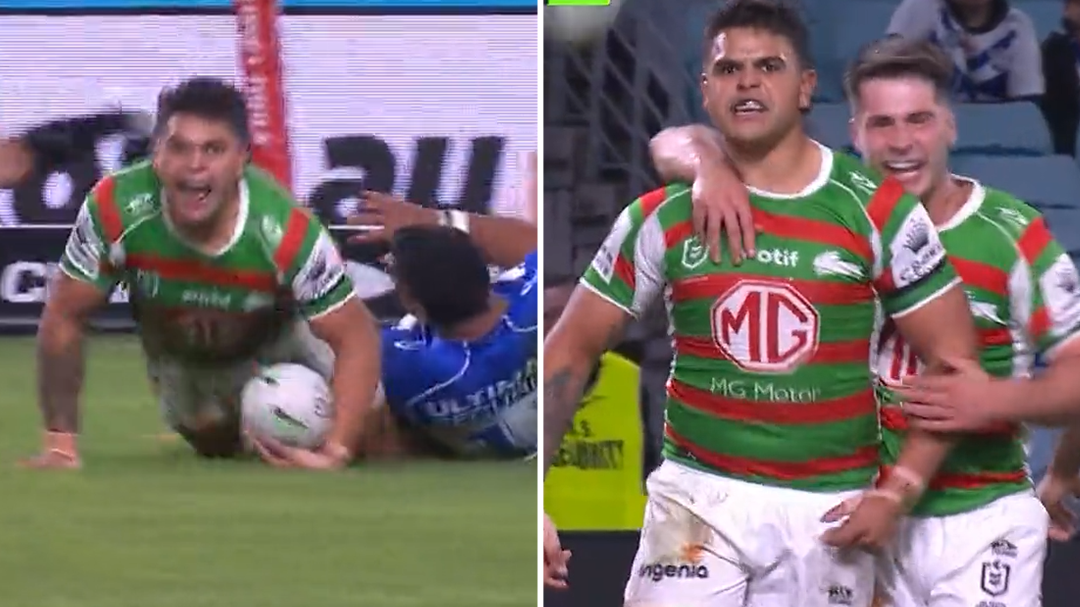 The Rabbitohs have a murderer’s row of games to finish the season, which can be good or bad. There’s not really a better time to play the Storm than this week, and a win there would suddenly catapult them into top four considerations.

But looking at their remaining fixtures, there’s also a world where things can go horribly wrong – no team really has a wider range of outcomes to end the year than Souths, where you can make the case for them finishing fourth or tenth with equal conviction.

Tier four: One spot up for grabs

It’s fair to say that most of the permutations for the final spot in the top eight run through Brookvale. Manly currently sit in eighth, and play the ninth, tenth, and 11th placed teams in the next six weeks.

This weekend’s game against the Dragons and the next against the Roosters will go a long way to giving us clarity on who could potentially sneak into the finals.

One of the premiership favourites before a ball was kicked, it’s fair to say that the Roosters season hasn’t met expectations so far.

Still, there’s plenty of time to steady the ship – an impressive win over the Dragons on Saturday helped a lot, as will another this weekend against Newcastle before a huge fixture against the Sea Eagles the following week. Canberra’s season looked dead and buried after their controversial loss in Wollongong at the start of the month, but an incredible performance in Melbourne has breathed life into Ricky Stuart’s team.

The next two weeks are very manageable and aside from a visit from the Panthers, the rest of their slate is pretty kind. The Raiders have shown glimpses of being both a top four and wooden spoon contender at various points this year, but if they can apply themselves down this final stretch, they’re a red-hot chance of the top eight.

Despite the ongoing rumours about coach Anthony Griffin, the Dragons are still in the hunt for the finals – if they can win their upcoming games against fellow top eight contenders Canberra and Manly, victories over the lowly Titans and Tigers would be enough for them to extend their season.