“It’s really special to win a medal. I was touched out by .08 in the 400m and I remember getting back to the hotel and I was just devastated,” Pallister said afterwards.

“It’s really exciting coming to my first senior international meet and coming back to a pool that I loved three years ago and following the process as Bohly (swimming coach Michael Bohl) would say.

“Moving forward it’s a really nice stepping stone to see what I can do in the future. I think if I work the back end more rather than just attacking the front end then it’s an event that I could do something really special in in the future.” 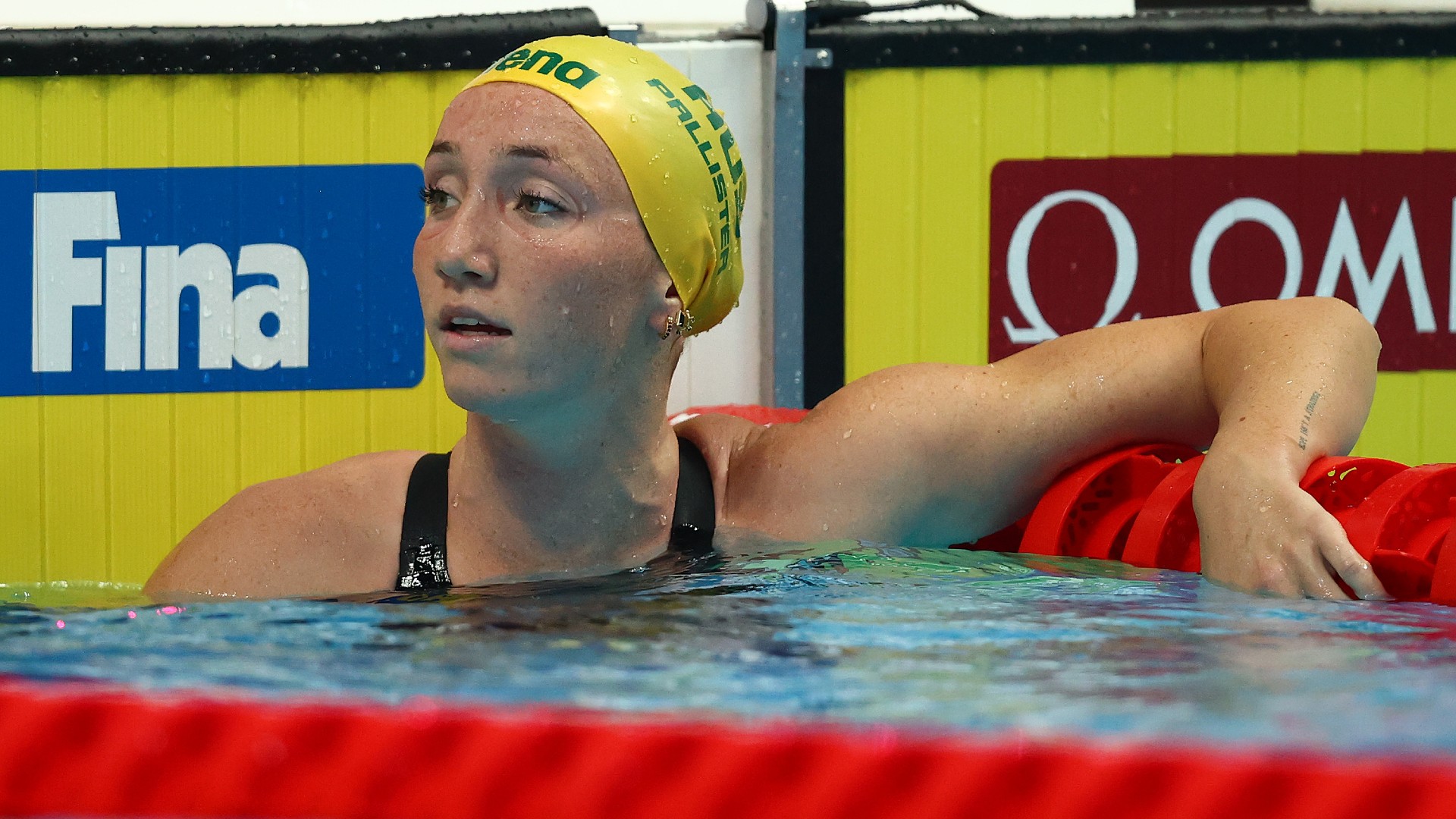 Ledecky never looked threatened and clocked 15:30.15 – just under 10 seconds more than her world record from 2018 – to finish 14.74 seconds ahead of fellow American Katie Grimes.

“To share this moment with her is really special,” Ledecky said.

The 16-year-old Grimes is the second youngest medallist in the 1500 at a worlds since Ledecky won it for the first time in 2013.

“I was really nervous leading up to it because it’s my first world championships and Team USA has been doing a great job, so I wanted to keep that going,” Grimes said.

Ledecky also won in 2015 and 2017 and has at least four world titles in the each of the 1500, 800 and 400 freestyle events. Only compatriot Michael Phelps also won at least four gold medals in three different swimming events at the worlds.

“I don’t think that anyone will be topping Katie for a little while, but I definitely think it’s a goal for everyone moving forward,” Pallister said.

“She’s definitely set the standard of distance swimming in the world.”

Pallister’s bronze was her country’s first medal in this race. The 1500m freestyle was the only women’s event at a worlds in which an Australian swimmer had not reached the podium.

Italy’s Simona Quadarella, who was second fastest in qualifying, finished fifth, more than half a minute behind. 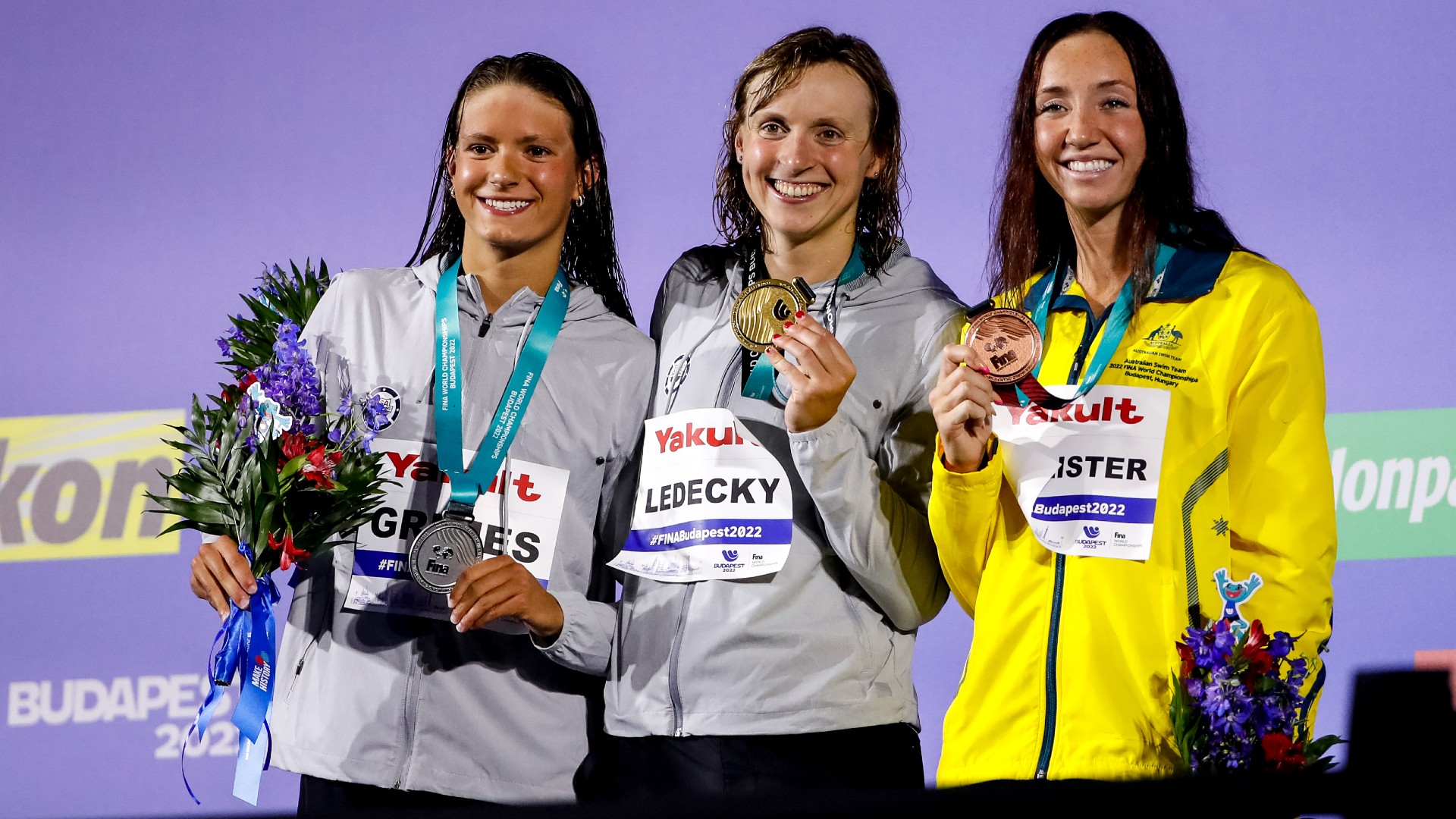 Regan Smith got another gold for the United States in the women’s 100 backstroke, clocking 58.22 to finish 0.18 ahead of Canadian rival Kylie Masse with another American, Claire Curzan, finishing third.

Then Italy’s show began with Ceccon – who set a world record in the men’s 100 backstroke.

He stunned the competition in Budapest by clocking 51.60 seconds to shave 0.15 seconds off the previous best mark set by American Ryan Murphy at the 2016 Olympics.

“Yesterday I swam 52.1, very easy,” Ceccon said. “I am feeling good in water and just doing my race, staying calm and focusing on my race. And that’s it.”

“Hats off to Thomas,” Murphy said of seeing his record beaten. “That’s a really, really fast time and it’s going to be an exciting couple of years.”

He is the second Italian man to set a world record in long course swimming after Giorgio Lambert. Lambert held the record in the men’s 200 freestyle from 1989-99.

Italy’s Benedetta Pilato followed up by winning the women’s 100 breaststroke in 1:05.93, 0.05 ahead of Germany’s Anna Elendt and 0.09 ahead of Lithuania’s Rūta Meilutytė.

The 17-year-old Pilato, who couldn’t contain her delight, is the youngest Italian swimmer to win gold at a worlds.

She brought her country’s tally of golds to three, already as many as Italy’s swimmers ever managed at a previous worlds.

INSURRECTION: Colbert’s Staff Harassed GOP Lawmakers Inside US Capitol After It Closed — AND Also Mocked and Harassed Speakers at Rally for Families of J6 Defendants